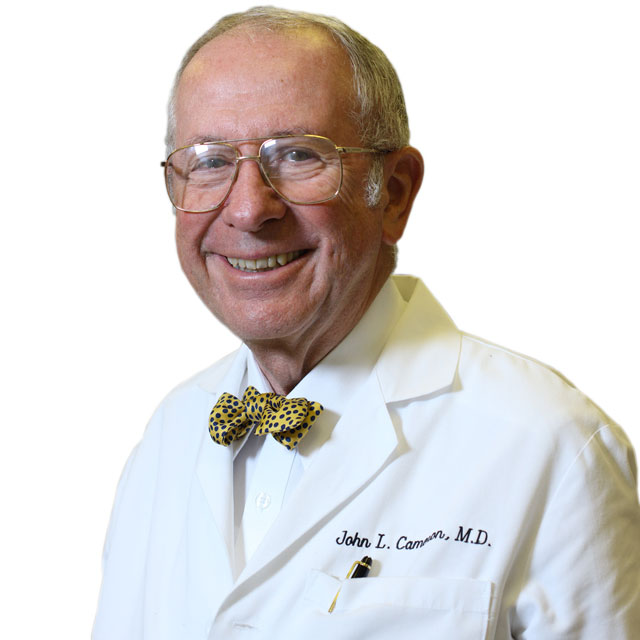 On the Shoulders of a Surgical Giant

“Dr. William Stewart Halsted was the first chief of surgery at the Johns Hopkins Hospital. Perhaps his two most important accomplishments were the introduction of the philosophy of safe surgery and the initial system for training surgical residents. Halsted’s biographers took care to enumerate his scientific and technological contributions, but they also suggested that his broader impact was evidenced by the fact that those ‘who went out from his operating room were magnificently trained, and are among the great ornaments of American surgery.’ We believe John Cameron has had a similar impact through the 106 individuals he has directly trained.”

As the surgical career of John L. Cameron ’62 comes to a close, his colleagues set out to show his vast impact by focusing on a single sphere of his far-reaching career: his influence on the training of academic surgeons during his time as the William Stewart Halsted Chair and Chief of Surgery at The Johns Hopkins Hospital from the years 1984 to 2003.

Writing in the May edition of Annals of Surgery, Marcello Cerulo and Pamela Lipsett proposed the term “Cameron Legacy Factor” to quantify “the sheer magnitude” of Cameron’s impact on the world of surgery exclusively through his impact on those he directly trained, and specifically “to honor his contributions to the training of subsequent generations.”

52.8%
achieved the rank of full professor

71.9%
achieved the rank of associate professor

20.2%
achieved the rank of institute director or chair

pursued careers in a private hospital or practice

37%
were appointed chiefs of divisions

55.6%
were appointed to positions that included departmental chairs or leadership boards

Surgical subspecialties of Cameron Factor of 1

3 individuals served as founding directors of departments or divisions, and

7 achieved leadership roles that extended beyond chair, such as chief medical officer for a practice group, member of a leadership board or deanship of a medical school.

Over the course of 16 years, 20 individuals served as program directors, division chiefs or departmental chairs who oversaw the training of residents and/or fellows. These individuals directed the training of an average class size of 6.1 residents or 2 clinical fellows per year. The total number of these individuals, who then are considered to have a Cameron Factor of 2, was estimated to be between 1,150 and 1,313.

In addition to the trainees with a Cameron Factor of 1 or 2, some 137 additional trainees have trained with Cameron before or after his chairmanship.

“Given the relatively short time frame of follow-up in this perspective, the full impact of those with a Cameron Factor of 3 is unknown—but is likely to include another exponential increase in influence,” note the author.