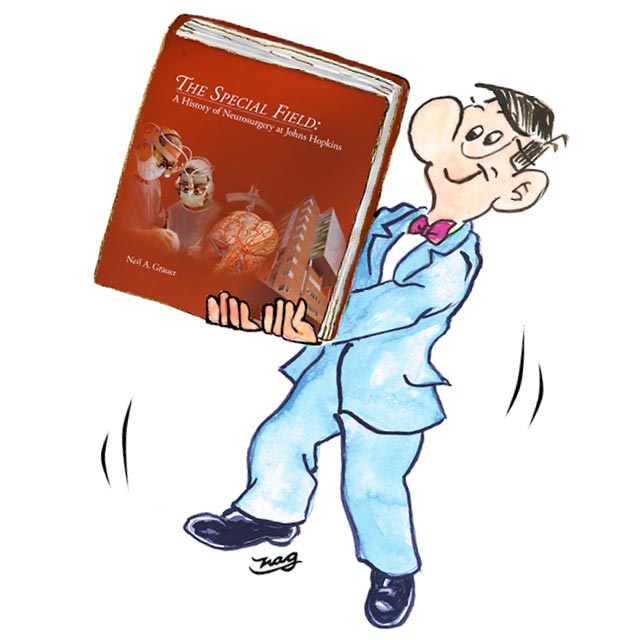 Weighing in at a hefty 6 pounds, The Special Field: A History of Neurosurgery at Johns Hopkins is a meticulous account of the contributions Johns Hopkins has made to neurosurgery, from past to present day. It’s not just for those who love all things cerebral, however. See how well you do on our multiple-choice quiz, which highlights some of the lighter anecdotes that author Neil A. Grauer included in his book.

1. After winning the 2014 Wells Fargo Championship, what did PGA golfer J.B. Holmes joke he’d stash in the silver trophy?

a. A golf ball
b. A piece of skull
c. A four-leaf clover

a. A golden scalpel
b. An X-ray film signed by every member of the surgical team
c. A cigarette case

3. Which political figure died before neurosurgeon Walter Dandy could get to the revolutionary’s bedside?

4. Which political figure requested an advance appointment from the neurosurgeon making hospital rounds?

5. When Walter Dandy would distinctively call out “Lawrence!” during an operation, what was he requesting?

a. Audio recording of The Lawrence Welk Show to be played
b. A nurse to read poems by D.H. Lawrence, for inspiration
c. His slipping trousers to be hiked up

6. With which nemesis was it proposed that Harvey Cushing share a Nobel Prize?

7. Who did Harvey Cushing threaten to kick down the stairs if he ever showed up again at The Johns Hopkins Hospital?

8. According to Walter Dandy, this item made operating a pleasure.

a. An improved, adjustable headlamp
b. The music of Debussy playing in the OR
c. A padded stool

After suffering from vertigolike dizziness, Holmes learned he had a Chiari malformation, a structural defect in the cerebellum. Pediatric neurosurgeons George Jallo and Edward Ahn operated on Holmes in September 2011, and the pro golfer kept the leftover piece of skull in his closet.

As a chain smoker, Cushing surely appreciated the gift. Black-and-white footage of the historic operation can be found on YouTube.

Trotsky was living in Mexico in 1940 when he was struck in the head with an assassin’s mountaineering ice axe. Dandy was asked to fly to Mexico City to save him, but Trotsky died before Dandy could board a plane at Washington National Airport.

4. a - Madame Chiang Kai-shek, first lady of the Republic of China

During her hospital stay, Madame Chiang Kai-shek insisted that neurosurgeon Donlin Long make an appointment to see her instead of dropping in; she wanted adequate forewarning to do her hair, clothes and makeup.

5. c - His slipping trousers to be hiked up

Wallace Lawrence, Dandy’s faithful orderly, was occasionally asked to pull up the neurosurgeon’s pants if they began to slip during his many long operations.

In 1936, it was suggested the so-called father of modern neurosurgery share the prize with the younger, risk-taking Dandy—despite the complex disdain the two held for one another. The Nobel, however, went to two pharmacologists. Cushing, nominated at least 38 times for a Nobel Prize in Physiology or Medicine, never won.

7. b - Edwin Grauer, a reporter for the Baltimore American

The Special Field author’s great uncle tussled with Cushing after Edwin showed up at the hospital to try to confirm secret brain surgery on Army Chief of Staff Gen. Leonard Wood in 1910. Cushing called Grauer the next day to berate him for snooping.

8. a - An improved, adjustable headlamp