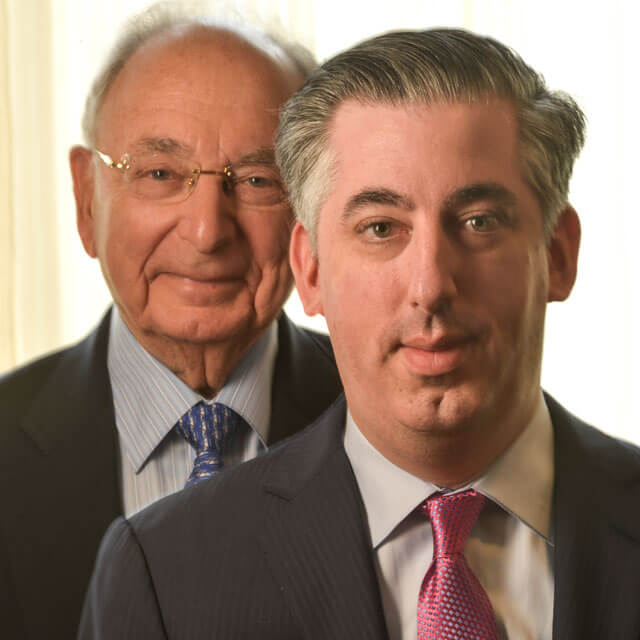 “As soon as we launched, there was a tremendous response from families around the world. I couldn’t believe how many emails we received and how many views we had on our website from people from all parts of the globe.”

Even when their son, mike, was still an infant, Morton Goldberg and his wife, Myrna, were concerned about his motor skills. His ability to stand was delayed, and he subsequently could not run as well or as fast as other little boys. Later, they would recall that he never really kicked in the uterus like other babies would.

As a world-renowned ophthalmologist at Johns Hopkins, Mort Goldberg enjoyed access to the best health care the world could offer, but no one seemed to know exactly what the problem was. After Mike’s birth in June 1976 and throughout his childhood, Myrna and Mort noticed that Mike was late in meeting his physical milestones and was weaker than his peers.

“We took him to several pediatric neurologists and geneticists all over the country, including those at the National Institutes of Health, and nobody could make an accurate diagnosis,” says Mort, former director of the Wilmer Eye Institute (1989–2003), who continues to do research, teach and see complex patients with residents and fellows. “It was a wastebasket of nonspecific diagnoses.”

What followed were years of misdiagnoses and false leads. One doctor thought Mike might have minimal brain dysfunction or even cerebral palsy, although those diagnoses did not seem appropriate given Mike’s superior intellect. It was not until Mike was a teenager that he was officially diagnosed with myopathy—a broad and not-very-helpful classification that basically describes any disease caused by abnormal muscle functioning. The specific type of myopathy would continue to elude the Goldberg family for another two decades.

In the intervening years, Mike attended Duke University and then went on to medical school at Johns Hopkins, graduating in 2003 with both an M.D. and an M.P.H.

“I had been exposed to medicine for my entire life because of my father’s career, and I learned firsthand the intellectual and emotional gratification that a career in medicine could offer,” says Mike, who today lives in Pittsburgh, where he is director of neuroradiology for Allegheny Health Network and associate professor of radiology at Drexel University College of Medicine. When it came time to choose a specialty, he steered clear of physically demanding surgical subspecialties, choosing radiology.

After completing his radiology residency at the University of Pennsylvania, Mike continued his training at Penn with a fellowship in neuroradiology. During these years in Philadelphia and with a growing interest in trying to understand his condition, he met with Carsten Bönnemann, who at that time was at Children’s Hospital of Philadelphia. Bönnemann is considered one of the world’s leading experts in neuromuscular disorders. Sizing up Mike’s physical appearance, gait, distribution of weakness, muscle configuration and age, Bönnemann recommended muscle ultrasound and genetic testing as soon as possible.

When the results came, the Goldberg family knew for certain what had eluded them for so long: Mike had a condition known as RYR-1 myopathy, which was related to specific mutations he had inherited from both Mort and Myrna.

RYR-1 myopathy is an inherited disease that can present a range of symptoms, from the almost undetectable to the potentially lethal. It is known as an “orphan disease” because it is rare and impacts a relatively small number of people, roughly one in 10,000.

Cramping, muscle pain, difficulty with exercise, weakness and heat intolerance are common signs and symptoms. The signs range from general weakness and droopy eyelids to a possibly fatal reaction to anesthesia, known as malignant hyperthermia. Some people with RYR-1 myopathy can experience a dangerous and potentially fatal condition called rhabdomyolysis, caused by abnormal breakdown of muscle byproducts into the bloodstream. Often, there is weakness that is concentrated in the muscles nearest the torso, including the diaphragm, which can produce breathing problems.

RYR-1 can be inherited by receiving a defective gene from one or both parents, or it can arise from nowhere—“de novo” in scientific terms—from a spontaneous mutation. Mike is what is known in genetics as a compound heterozygote.

“Mike inherited one mutant RYR-1 gene from me and a different mutant gene from my wife,” Mort says. Mort and Myrna also have another son, but Mike is the only one in the family with RYR-1 myopathy. Mike and his wife, Lindsay, have two healthy young children.

Symptoms progress very slowly or, sometimes, not at all—hence Mike’s relatively stable condition. Today, at 42, he says his myopathy is on the mild end of the scale of severity; he has some difficulty with certain activities, like climbing stairs, for example. More severely affected patients can be confined to wheelchairs and may require assistance to breathe.

RYR-1 myopathy can be diagnosed by a pathologist examining muscle biopsies for cellular abnormalities or by MRI and ultrasound, which can detect structural abnormalities. Though Mike had undergone a biopsy when he was younger, “it didn’t really give a specific diagnosis,” he says.

The best and most reliable diagnosis, as the Goldbergs now know, is obtained from genetic testing.

While mike’s diagnosis was a revelation that was decades in the making, it was but the first step in a marathon of strides that he and his family would take over the next several years.

The first lesson was that there is presently no cure. The second was that finding others with an orphan disease like RYR-1 was not easy. The third came in 2013, when Mike met with myopathy expert James Dowling, assistant professor of molecular genetics at the University of Toronto and a neurologist at the Hospital for Sick Children in Toronto.

At the meeting with Dowling, with his mother, father, brother and wife present, Mike asked point-blank, “What does this field need to move forward?”

Dowling’s answer came almost as fast as the question. The RYR-1 community needed an organization dedicated exclusively to individuals affected by RYR-1 mutations to fund research, and advocate for and serve the needs of affected individuals and families. “Dr. Dowling would see a patient, and they would ask, ‘Where can I go? What website can I visit?’ And there was nothing,” Mike says.

The Goldberg family created the RYR-1 Foundation, a nonprofit public charity, designated as a 501(c)(3) by the IRS, which has become a focal point for connecting people around the world who are living with RYR-1. It has yielded the first-ever database of RYR-1 patients. In less than three years, the foundation has raised more than $2 million and funded more than $850,000 in RYR-1-related research.

“As soon as we launched, there was a tremendous response from families around the world,” says Mike. “I couldn’t believe how many emails we received and how many views we had on our website from people from all parts of the globe.”

“For the first time in their lives,” Mort adds, “these people were able to put two and two together and understand what was going on with their bodies.”

The 197 people currently in the database are a storehouse of knowledge about the condition but also a ready group willing to participate in drug trials and research. This feeds into the charity’s other mission of finding treatments—and a cure.

In 2016, the foundation convened the first RYR-1 International Family Conference, which drew more than 200 people from six countries to Baltimore. More recently, in July, the second RYR-1 International Family Conference took place in Pittsburgh. “It’s at these meetings where you finally get to meet some of these people who you’ve only interacted with online,” Mike says. “That has been a source of tremendous comfort and support.”

The gatherings also offer an opportunity for foundation-funded researchers to present their findings and to collaborate. Their efforts are guided by the foundation’s Scientific Advisory Board, which meets twice yearly and includes some of the world’s leading experts in RYR-1-related diseases.

Not So Rare After All

To date, the RYR-1 Foundation has underwritten 10 research projects in Canada, the United States and Australia.

One project has yielded a 3-D model of the ryanodine receptor protein. “Scientists are plotting where the mutations are and understanding their atomic structure—very fundamental knowledge that will help with the development of new drugs and other treatments,” Mort says.

Another avenue includes the recent production of the first-ever transgenic mouse with a recessive RYR-1 mutation. This will help in the study of the underlying mechanisms of RYR-1 myopathy and the development of potential treatments. And perhaps the most exciting development: research that has served as the basis for development of a clinical trial for a class of drugs called Rycals, discovered by Andrew Marks, chair of physiology and professor of cellular biophysics at Columbia University, who chairs the Scientific Advisory Board. That effort will soon start stage 2 trials.

Another clinical trial is set to examine the effectiveness of repurposing an existing drug for new targets. “There’s some experimental evidence that this class of drugs—urea cycle-correcting drugs—has a favorable effect on correcting three-dimensional protein folding abnormalities in certain types of RYR-1-affected muscle fibers,” Mort says.

As the research progresses, it may turn out that RYR-1 myopathy is not such a rare disease after all. As genome sequencing becomes more common, many more people with undiagnosed mild muscle symptoms will likely be found with RYR-1 mutations.

“This prediction is based on the very large size of the protein involved and the correspondingly large target size of the RYR-1 gene for several different mutations,” says Mike.

In the end, Mort is hopeful that his family’s experience can help others.

“There are literally hundreds of orphan diseases affecting small groups of people around the world for which there’s virtually no useful information,” he says. “I hope our charity can be a model for them.” 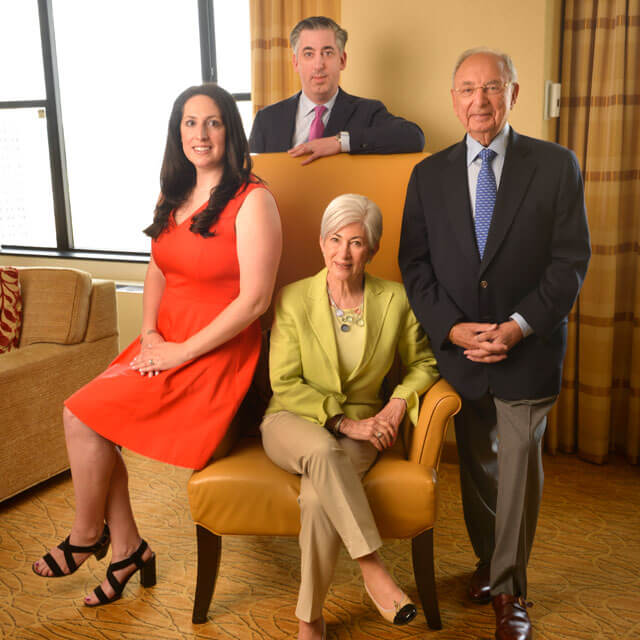 The work of the RYR-1 foundation is now a family affair. Mike is president and co-chair of research, together with his dad, who is the other co-chair (Mort is also a trustee). Mom, Myrna, is vice president and a trustee, and Mike’s wife, Lindsay, is the secretary-treasurer and a trustee.