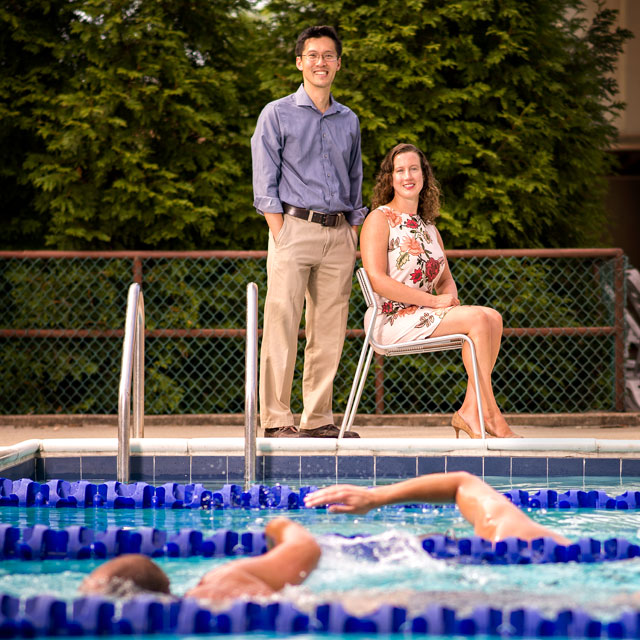 Swimmers, weightlifters and triathletes are among those who come from around the world to be treated by Lum, left, and physician assistant Holly Grunebach.

Pam Steenland’s mother wanted swimmers. So, from the age of 3 onward, Steenland and her two brothers took lessons.

Steenland gradually added to her sporting repertoire as she grew into adulthood. In her 20s, she became a long-distance runner. In the five years before she turned 50, she completed her first triathlon, then her first half Ironman (an event with a 1.2-mile swim, a 56-mile bike ride and a 13.1-mile run) and then a full Ironman.

“I don’t do anything in a small way,” says Steenland, a former neonatal ICU nurse who now owns a home health care company based in New Jersey.

Serious about triathlons, she steadily increased her training, eventually hiring a trainer to coach her through intense strengthening exercises. All of that came to an abrupt halt in September 2013. While blow-drying her long hair in a sleeveless dress, Steenland noticed that her right arm was blue and about twice its normal size—a sure sign, she knew from her medical training, that something was seriously wrong with her circulation. That event set off a monthslong medical odyssey that finally landed her in the office of Johns Hopkins vascular surgeon Ying Wei Lum, one of the country’s few experts on a rare condition known as thoracic outlet syndrome (TOS).

Lum didn’t set out to be the go-to doctor for TOS. When he first came to Johns Hopkins in 2004 for his residency, then stayed for his fellowship, he trained under former Surgeon-in-Chief Julie Freischlag. A world-renowned vascular surgeon who now serves as CEO of Wake Forest Baptist Medical Center in Winston-Salem, North Carolina, Freischlag had noticed the lack of surgeons trained to treat TOS. She made the condition a focal point of her practice during her time at Johns Hopkins.

This unusual condition, which affects about 2 percent of individuals, arises when nerves or blood vessels become compressed in the thoracic outlet—the space below the collarbone and above the ribs. TOS can lead to devastating pain and weakness, and, if left untreated, can sometimes permanently affect function or cause life-threatening blood clots. A variety of factors can lead to less space in the thoracic outlet, including anatomical abnormalities, accidents that cause swelling in that area, increased muscle mass from athletic training or training-related injuries, as in Steenland’s case.

Freischlag worked hard to teach her protégé the intricacies of treating patients with TOS. When she left Johns Hopkins in 2014, Lum—who had since been hired as a faculty member—became the natural choice to handle her busy patient load.

By the time TOS patients come to see Lum, he says, many have been through multiple practitioners who haven’t taken these patients’ problems seriously. Even if specialists do recognize the gravity of the issue, they often aren’t knowledgeable enough to make an accurate diagnosis or offer useful treatments.

“There are lots of doctors who don’t believe that this syndrome even exists, particularly the neurogenic type. And even if they believe it exists, many aren’t ever taught about it,” Lum says.

The symptoms of TOS can mimic those of other conditions, there can be a variety of clinical presentations and there aren’t clear-cut diagnostic criteria for this condition, he explains.

A large portion of his patients find him through social media after exhausting all their local options, say Joanna Rutkowski and Lindsay Keilholtz, two nurses who run Lum’s call center for TOS patient access. Lum’s reputation as an expert surgeon and his caring approach—he gives out his email and encourages patients to ask questions anytime—have drawn patients from as far away as Russia and Qatar.

“Many of them want to be seen yesterday because they’ve been waiting so long for help,” says Rutkowski.

While most new patients will need to wait up to two months to see Lum, exceptions are those who have confirmed blood vessel compression or a clot—a situation considered a medical emergency. Those patients, Lum says, are seen right away, no matter how busy his clinic schedule.

That’s what happened for Steenland. Even though a local vascular surgeon correctly diagnosed her with TOS, he incorrectly insisted that physical therapy was all she’d need to resolve her problems. For six months, an insidious blood clot was growing in her subclavian vein, a major blood vessel that drains blood from the arm. By the time she finally saw Lum in February 2014, the clot was about 6 inches long. Through it all, Steenland had been growing weaker as the days went by, and the clot was growing worse as she struggled to continue training.

“I told him that I needed my life back to be able to be happy going forward,” Steenland says. She knew that if Lum couldn’t restore her circulation, she wouldn’t be able to continue swimming, cycling, running or being athletically active. “He said, ‘I don’t know if I can restore you to your life. You’ve gone without treatment for so long, but I’ll try my best.’”

Getting the Right Tests

Lum’s new patients usually meet first with his colleague Holly Grunebach, a physician assistant who’s already read any notes about the patient’s medical history, including the often long and meandering path the patient took to get to Lum’s practice. Then, when she enters the room, she listens. Grunebach says that many patients tell stories of the incredible effort they’ve taken to modify their lives to deal with the chronic pain that accompanies TOS.

“It might take them a week to fold laundry because their arm hurts so badly,” she says. “Some move all their dishes to bottom shelves because they’re afraid they’ll drop them. People who always do their hair will let it go because they can’t use a blow dryer anymore.”

Another big part of Grunebach’s job is making sure that patients get the right diagnostic tests. After giving them thorough exams meant to assess their circulation and the potential for a blood clot, she sends them to the Noninvasive Vascular Lab—a facility located right across the hall from Lum’s offices—for more definitive testing.

Diana Call, technical director of the IAC Noninvasive Vascular Lab, notes that testing for TOS has grown increasingly more sophisticated. What used to be a condition that could only be diagnosed through physiological nonimaging tests can now receive additional imaging confirmation with vascular ultrasound tests. She and her colleagues have helped evaluate close to 2,000 patients with suspected TOS over the last decade, she says, with ultrasound as one of their most valuable tools.

Most commonly, ultrasound is used to assess blood flow when patients’ arms are by their sides and then raised above their heads. Moving the ultrasound transducer from the neck to the collarbone and down the arm, she and her colleagues look for the telltale red and blue color-coding in their images of healthy circulation in arteries and veins. Oftentimes, those wide circulatory paths narrow to a trickle or stop completely in patients who have TOS, and the patient’s pulse frequently becomes diminished or disappears.

When Surgery is the Option

Lum reviews all this information before meeting his patients. If the wealth of evidence suggests TOS, he gives patients their treatment options. Those whose nerves are being compressed—the vast majority of TOS patients, which Lum estimates at up to 95 percent—might start with injections of botulinum toxin, which relaxes the scalene muscles in the neck to widen the thoracic outlet. However, this treatment has diminishing returns, with injections becoming less effective over time. Surgery, in which Lum removes a rib and cuts or removes the scalene muscles, is the best surgical option with longer-lasting effects.

For patients with vein or artery compression, surgery is frequently recommended. The longer patients go without surgery, Lum explains, the poorer results can be. Occasionally, when there is arterial damage, he adds, surgery needs to be performed right away because of the risk of limb loss.

With Steenland, there was little doubt she would need surgery, Lum says. After a month on blood thinners to help diminish her enormous clot, he performed the necessary decompression procedure.

Within a month after her discharge, she was back with Lum to receive an angioplasty to open the vein and remove what was left of the clot. Lum had warned her not to expect too much—the longer a clot’s in place, the more damage a vessel sustains, often permanently altering its ability to carry blood. Without proper blood flow, tissues drained by this vessel can persistently swell, hampering function. In Steenland’s case, this would have meant a loss of her athletic lifestyle.

As she waited with bated breath, she heard Lum exclaim with surprise: Her subclavian vein had popped open, with blood flowing through as if nothing had ever happened.

Steenland still had a long road ahead. She’d need months of physical therapy to regain the use of her arm and neck, and an even longer time off from the intense daily exercise she was used to. Eventually, she says, Lum gave her permission to swim the length of the tiny pool in the backyard of her New Jersey home once a day.

She gradually added a second length, then a third—and by the next year, Lum acquiesced to her competing in a 4-mile swim down the St. John coast in the Caribbean. The following September, three years after she first noticed the symptoms that led to her TOS diagnosis, she completed another half Ironman. Last June, she completed the Escape From Alcatraz, one of the most challenging triathlons in the country, which takes place over the streets and waters of San Francisco.

“When I came back, I came back with a vengeance and more drive than ever before. Something changed in my mind,” Steenland says. “Now that I’m 62, I’m amazed that I’m still getting faster than ever before. A gift was given to me to be able to have the life back that I had before TOS. I am deeply grateful to Dr. Lum.” 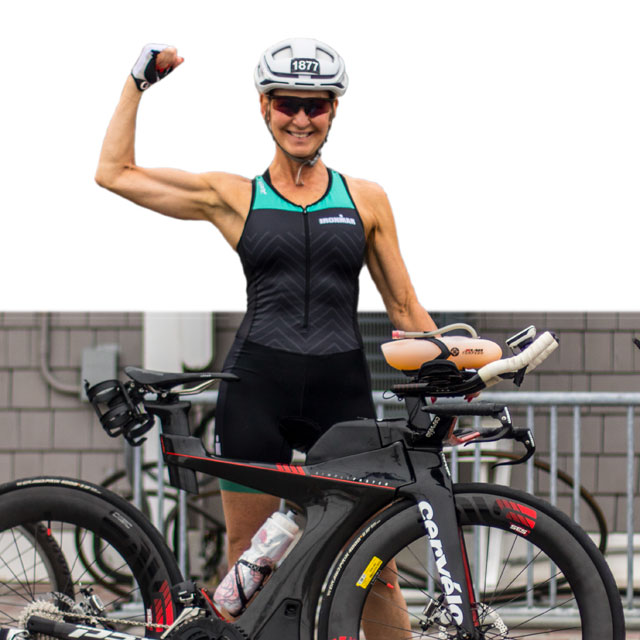 Postsurgery, Steenland is "faster than ever before."

“When I came back, I came back with a vengeance and more drive than ever before. Something changed in my mind.”

Very few surgeries conclude with patients being able to take home whatever was taken out. However, former Johns Hopkins Surgeon-in-Chief Julie Freischlag worked with the hospital’s legal department several years ago to make it happen for TOS patients, says physician assistant Holly Grunebach. Once their rib is surgically removed, patients have the option to keep it.

Grunebach explains that patients must sign a waiver first, protecting Johns Hopkins against the minuscule chances of risk from patients being exposed to medical waste. After the rib is examined by pathology, it’s then autoclaved—a high-heat procedure that kills any living cells—and then placed in a specimen container for patients to take with them.

The rib can look charred from the procedure, so Grunebach recommends that patients soak it in bleach for 24 hours, then paint it with clear nail polish for optimal appearance. She says patients have some stories ranging from the relatively mundane to the highly unusual about how they’ve used their unique souvenirs: Some place them on the Christmas tree; others send the ribs with their children for show and tell. One patient paid for a bone carver to make art. Another was Eve for Halloween and took it with her as Adam’s rib.

“What they decided to do with their rib is one of my favorite questions to ask at follow-up,” Grunebach says.