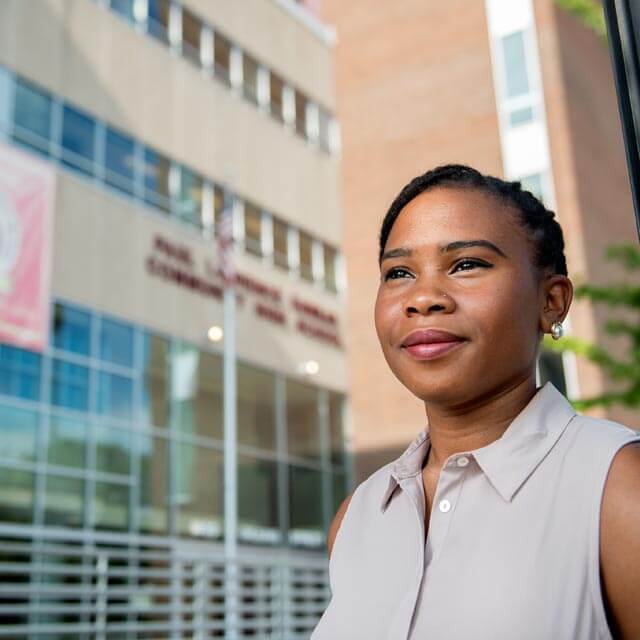 “Volunteering has given me more of a tangible idea of what I can do and what I want to do. Being a physician, especially in the black community, puts you in a position where you can enact change,” says third-year medical student Jasmine Holmes, pictured here outside Paul Laurence Dunbar High School in East Baltimore, where she offers support with academic and life skills.

“Volunteering has given me more of a tangible idea of what I can do and what I want to do. Being a physician, especially in the black community, puts you in a position where you can enact change,” says third-year medical student Jasmine Holmes, pictured here outside Paul Laurence Dunbar High School in East Baltimore, where she offers support with academic and life skills.

But Baltimore is also home to joyful children, generations of strong families, and devoted community leaders and organizations resolutely working to address these challenges. What remained mostly in that spotlight’s shadow were ongoing efforts to tap those resources and generate the conditions for Baltimore to thrive—including the efforts of about 75 percent of Johns Hopkins’ medical students, who have long made it a priority, sandwiched between classes and labs, to volunteer within the East Baltimore community around the school of medicine campus.

Student volunteers spend anywhere from one to 500-plus hours a year volunteering with more than 40 organizations. Some groups work with children and youth, expanding opportunities and helping to develop academic and other talents. Some support adults facing illness, homelessness, addiction or unemployment. Others advocate for issues like child welfare, the environment and economic justice.

It helps that preclinical courses, which students take in the first year and a half of medical school, operate on a pass/fail grading system. “Pass/fail takes the stress off and still lets us be the people we want to be,” says second-year student Katherine Culbreath, who volunteers at about five different organizations in the community. Culbreath and other student volunteers say their clinical skills courses prepare them for their work by training them to interact meaningfully with people of different backgrounds—teaching them to read body language, ask questions without judgment and truly listen.

Here, meet three students who know their volunteer work is helping to shape the doctors they will become—doctors who have seen firsthand the conditions and challenges behind their patients’ poor health. Who have practiced the kind of interpersonal relations that help patients open up about the vulnerabilities physicians need to understand if they are to provide treatments that really help. Who don’t expect their service to begin and end in an exam room.

Growing up in New Orleans, Jasmine Holmes didn’t always have a lot of resources at her fingertips. What she did have was a mom who, though living with cancer, stressed the importance of education every step of the way.

“Not everyone has that push,” she says. “I think everyone is capable of anything. The possibilities are endless, and the push makes all the difference. And I think it’s important that the people who had that encouragement push back.”

Between the two groups, Holmes volunteers about 10 hours a week. The Brotherhood Alliance for Science and Education offers young men at nearby Paul Laurence Dunbar High School support with academic and life skills—applying to college and preparing for job interviews, for example—while simultaneously creating a network among the students themselves. In the Health Professions Recruitment and Exposure Program, volunteers teach high school students interested in the health professions some of the basics—for example, taking medical and social histories and conducting medical exams.

Through teaching and mentoring her students, Holmes says she’s learned the role she can play in connecting the community with resources that often remain out of reach. And she believes service is a powerful way for others to learn compassion for the community she’s come to know from the inside.

“There’s a huge divide between the world of medicine and the patient population that we’re serving,” Holmes says. “Volunteering allows me to be one of the people that bridges that divide and allows us to merge those worlds together.”

One day while volunteering as a health screener at Charm City Clinic, second-year medical student Xiao Wang asked a client a routine question about diet and exercise and learned the man only drinks soda. “The reason he doesn’t drink water is the city shut down the water to his house, and at the local corner store, soda is cheaper than water. So how can I tell him he needs to drink water when there are so many other issues there?”

Embarking on his second year of volunteer work in East Baltimore, Wang says it is insights like this one that show him who his neighbors are as individuals, and what lies behind the poor health and lack of opportunity many of them experience. Wang spends about five hours a week volunteering at the clinic—a nonprofit founded and operated by East Baltimore neighborhood leaders and medical, undergraduate, and graduate students to help clients navigate health and social service resources—and with Thread, a nonprofit that connects underperforming high school students with a supportive network of volunteers.

Volunteering in the community adds depth to his training as a doctor, says Wang, who was born in China and grew up in Michigan. It’s made him more socially aware, leading him to join the American Medical Association in lobbying for health care causes in Washington, D.C. It’s also taught him how to connect with underprivileged patients: Questions must build trust instead of walls of judgment, he says—for example, asking where a client sleeps at night instead of where his or her home is.

Planning on an internal medicine residency—he’s drawn to the long-term doctor-patient relationship—Wang also plans to continue volunteering wherever he goes. He feels driven to become more like the community leaders he’s met who are so invested in their neighbors’ health.

“Volunteering saps a lot of energy, but the product from volunteering is so enriching because hopefully you’ve been able to help someone in their life and also make a connection with them,” Wang says. “I want to be exhausted like that in my career because I’ll know on those days I spent all of my energy on my patients.”

Katherine Culbreath: Being Honest and Vulnerable

As an undergraduate at Wake Forest University in North Carolina, Katherine Culbreath talked a lot with her classmates about the economic disparities and homelessness they saw around them. “We realized we are privileged because we’re not fighting to stay alive and find a place to live,” says Culbreath, who grew up in South Carolina.

When she arrived at Johns Hopkins, Culbreath immediately noticed similar conditions in East Baltimore and knew she would find a sense of purpose by engaging with her neighbors. She ended up volunteering with five community-based organizations during her first year. “My main driving force is seeing people that are hurting; I can’t reconcile going about my life and not paying attention [to them] when I see that,” she says.

Like Wang, Culbreath does health screenings with Charm City Clinic. She also provides health education to clients recovering from medical procedures in the Convalescent Care Program at Healthcare for the Homeless, which works to address homelessness by providing health care and access to income and affordable housing. She has also planned curriculum and taught classes for Medical Education Resource Initiative for Teens, which provides seven years of academic enrichment, college guidance, paid hospital and lab internships, and mentoring for underrepresented youth pursuing health care careers. She volunteered with Living Classrooms, which offers hands-on education and job training to children and adults using urban, natural and maritime resources. And she has volunteered with Martha’s Place, a recovery program for women overcoming drug addiction and homelessness, located in the neighborhood where Freddie Gray lived.

For now, Culbreath says she’s drawn to primary care because she’s seen the way it helps patients access the specialty care they need. Volunteer work has given her invaluable practice in being honest and vulnerable and in demonstrating respect with people of different backgrounds, she says. Patients may not share all the information providers need to support them if they feel embarrassment or shame. “It’s the way you approach the situation and the attitude you have that can help overcome those barriers,” Culbreath says.

Questions must build trust instead of walls of judgment, Wang says—for example, asking where a client sleeps at night instead of where his or her home is. 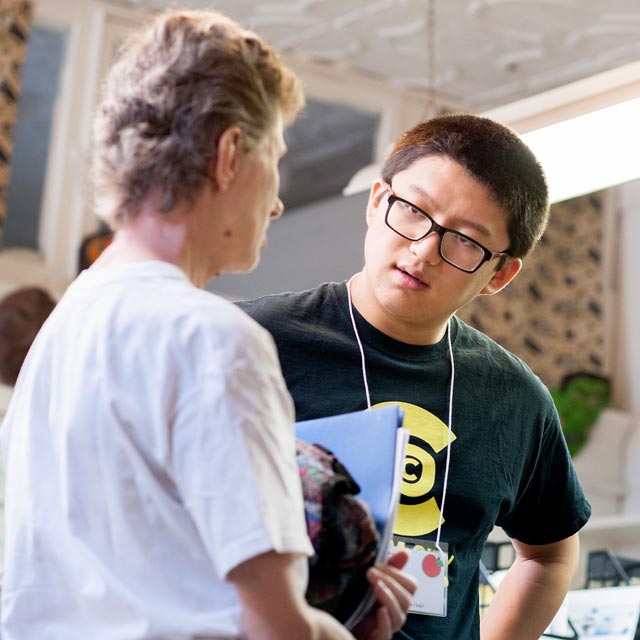 Charm City Clinic, where Xiao Wang now volunteers several hours a week, was a big draw when he was considering where to go to medical school. Its client-centered mission—to connect clients with long-term, comprehensive health care—stood out from other student-run clinics he observed around the country. As a health screener and one of three clinical directors, Wang conducts standard medical intakes and extensive social histories to screen for health issues and provide behavioral and lifestyle coaching. 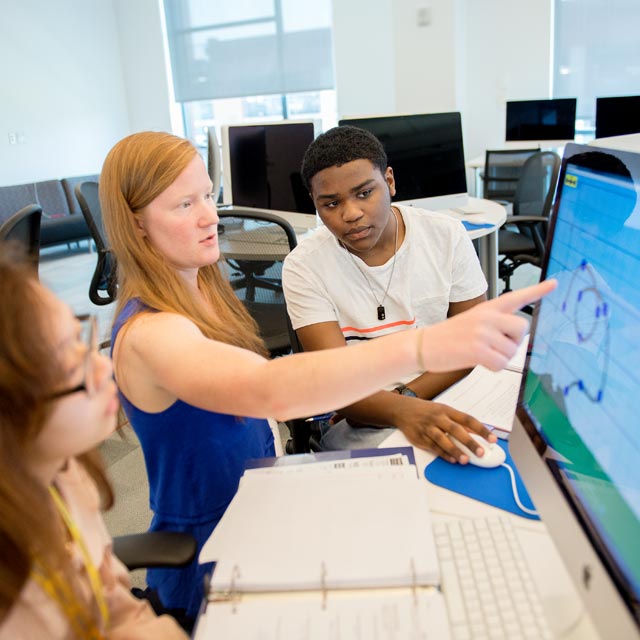 Katherine Culbreath teaches a class—for which she designed the curriculum—to local high school scholars through Medical Education Resource Initiative for Teens. The organization, which was founded four years ago by two teachers looking for additional support for their most ambitious students, provides academic enrichment and mentoring for three years of high school and continued guidance through college. The goal is to eliminate health care disparities by creating a workforce that mirrors the communities it serves.

Many Johns Hopkins medical students volunteer through SOURCE (Student Outreach Resource Center), which has been the community service and service-learning center for The Johns Hopkins University’s schools of medicine, nursing and public health for 10 years. Many who are members of the Student National Medical Association (SNMA), an organization supporting underrepresented minority medical students, volunteer with groups created by SNMA to support the Baltimore community.