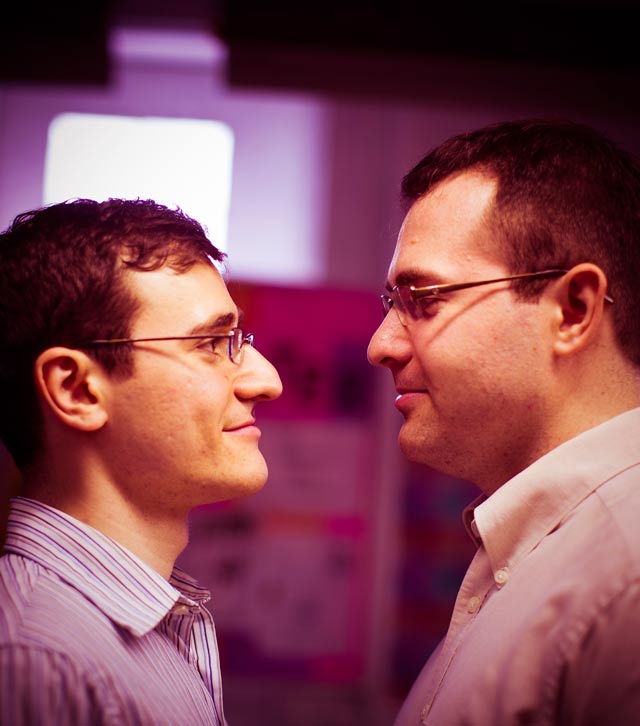 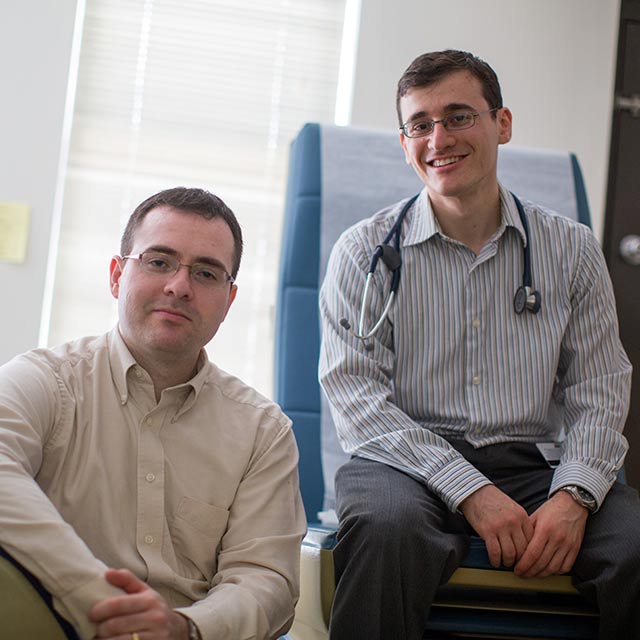 “The hospital was my second home,” Eugene says. “I spent my formative years there, from when I was 6 until I was about 10, and I think that’s why I fell in love with medicine. I had so much respect for the doctors and nurses, who were very kind to me. I even went to a camp run by one of my doctors for children with cancer.”

Eugene Shenderov was only 5, but he vividly remembers the night in 1989 that his family fled the former U.S.S.R. with other Jewish families for asylum in the West.

“We left in the middle of the night to get one of the last buses,” says Shenderov ’13, now a resident at Johns Hopkins Bayview Medical Center. “We ended up at a train station trying to get on what we knew might be one of the last trains, because they were shutting down that emigration program. It was so crowded, and I remember my father practically throwing us and our luggage through the windows before climbing in himself.”

The Shenderovs were escaping not just anti-Semitism, but—more compelling for them at the time—what amounted to a death sentence for Eugene, who had developed leukemia after the nuclear explosion at Chernobyl in April 1986.

View a video about the Shenderov family here.

The family—which included father, Peter; mother, Faina; and younger brother Kevin—had been living in Chernivtsi, Ukraine, just a few hundred miles from the plant, when the disaster occurred. Peter first heard “something funny” was happening with the nuclear reactor on a Voice of America broadcast. But the details were sketchy. “The Soviet government didn’t tell us anything for at least a week—it may even have been 10 days,” says Peter, who was a member of the local civil defense group. When he tried to pick up a radiation meter to measure the damage, he found that the KGB had locked and sealed the group’s storage locker. “That’s what the Soviet Union was about—not protecting its people, but hiding anything they could hide,” he says. “It’s a difficult point of view to comprehend.”

Over time, the children in the Shenderovs’ apartment building started losing all of their hair and mysteriously bleeding. Kevin contracted a baffling autoimmune disease. Then Eugene was diagnosed with leukemia.

“We asked his oncologist if we could have what you would call a support group,” says Peter. “We wanted to talk to parents whose kids were survivors. He said, ‘We don’t have any survivors.’”

Some 25 years after that grim period, Peter and Faina still shudder at the daily anxiety that enveloped them. Yet the odyssey that began in that crowded train station in 1989 had a happy resolution.

Today, both Eugene and Kevin ’16 are fully healed and rising stars in the world of academic medicine. They were both Rhodes Scholars—one of just a few sibling pairs to have earned the distinction—and valedictorians when they graduated from college—Eugene from Brooklyn College of the City University of New York and Kevin from New York University. Perhaps not surprising, given their early childhood issues, the brothers have charted a course in immunology, earning Ph.D.s in the field before coming to Johns Hopkins to obtain their M.D.s and to pursue careers as physician-scientists. Eugene, a resident at Johns Hopkins Bayview, is married with a nearly 2-year-old daughter. Kevin is a rising third-year medical student and was recently awarded a prestigious Paul and Daisy Soros Fellowship for New Americans, which will pay for most of his medical school studies here.

In fact, the entire Shenderov family has flourished. Speaking very little English when they arrived in the United States in 1990, Peter became a medical physicist and Faina a pharmacist specializing in oncology, both at Memorial Sloan Kettering Cancer Center in New York City. Their youngest child—a daughter, Stacey, who was born in the U.S.—is a budding scientist at the University of Miami.

Yet it was a long and difficult medical odyssey.

It started when the family successfully made it out of the former U.S.S.R. with the help of the Hebrew Immigrant Aid Society and landed in Rome for a few months. (Under Mikhail Gorbachev’s policies of perestroika and glasnost, the Soviet government had begun to allow Jews to emigrate.) While the Shenderovs waited to be cleared to live in the U.S., Eugene began treatment at what was regarded as the best hospital in Rome.

But Peter believes it was the superior medicine being practiced at Memorial Sloan Kettering, where Eugene began treatment once they landed in Brooklyn in February 1990, that saved the boy’s life.

“The hospital was my second home,” Eugene says. “I spent my formative years there, from when I was 6 until I was about 10, and I think that’s why I fell in love with medicine. I had so much respect for the doctors and nurses, who were very kind to me. I even went to a camp run by one of my doctors for children with cancer.”

Trained in physics and pharmacology, respectively, Peter and Faina were eager to volunteer their services. “We couldn’t just sit there waiting,” Peter says. “Eugene was mostly sleeping, and what could we do? We started to wander around, and I went to the medical physics department and got acquainted with a guy who had more projects on his hands than he could manage. It started as something pleasant to do during a time of great distress and became my profession.”

“My parents wanted to give back,” Eugene says.

Life was difficult for Kevin, who was struggling with his own illness, taking a drug that turned his skin orange and stunted his growth. “We didn’t have much time for him during those years,” his father says ruefully. But Kevin was resourceful—and gifted.

“When Eugene was being tutored at home, Kevin would hide in the corner, listening and absorbing everything,” Peter says. Worried that Kevin would be bored in school, Peter approached the principal of his son’s Jewish day school, who was sympathetic and agreed to do some testing. They couldn’t find a test Kevin didn’t pass to perfection, Peter says, so he ended up skipping the fifth and seventh grades.

Both brothers were superstars at Brooklyn’s Edward R. Murrow High School, but the catalyst for their careers as physician-researchers was a scientist at Memorial Sloan Kettering named Alan Houghton. “He started us on our research journey,” Eugene says.

When he was 16, Eugene approached the distinguished cancer researcher and asked if he could spend the summer working in his tumor immunology lab. “He told me, ‘It’s difficult to work in a lab and commute every day as a high school student. Come back in a year or two.’ I remember leaving and thinking to myself, ‘If I don’t try, I won’t know what might have happened,’ so I walked back in and said, ‘It sounds like a lot of work, but I’d like to try it.’ And he had his secretary arrange the paperwork,” Eugene says.

Kevin also worked in the lab for four summers studying potential cancer vaccine targets—both brothers were high school Intel Science Talent Search semifinalists as a result of their lab work—and says Houghton was a powerful role model. “He showed us how incredibly satisfying it is to not just do research, but to apply it clinically.”

Eugene says that Houghton, who has Lou Gehrig’s disease, “models not just the idea of working bench to bedside, but of overcoming huge adversity. He was already in a wheelchair when we met him. Now, he is on a ventilator and communicates like Stephen Hawking. But he ran the lab through the sheer power of his will and intelligent presence. And he taught us that, practicing medicine, you can only help so many people directly, but if you research new solutions for disease, you’ll touch the lives of hundreds of thousands of people you’ll never meet.”

While they were in college, both brothers spent summers working for Houghton’s colleague in England, Vincenzo Cerundolo of the University of Oxford’s Weatherall Institute of Molecular Medicine. When they were named Rhodes Scholars—Eugene in 2005 and Kevin in 2007—they pursued doctorates in immunology through a joint program between Oxford and the National Institutes of Health (NIH).

“We both did immunology, but our research focused on different questions,” Kevin explains. “I was doing vaccine immunology, and Eugene was doing more tumor-related things, looking at T cell receptors, trying to figure out how the properties of the receptors relate to the immune response.”

At Johns Hopkins, they are both involved with the Charm City Clinic, which provides disadvantaged East Baltimore residents with access to health care and social services. Eugene was one of the clinic’s founders. Kevin just completed a term on the board.

“It’s an incredible story,” says Alan Sher, chief of the Laboratory of Parasitic Diseases at NIH’s National Institute of Allergy and Infectious Diseases and of its Immunobiology Section, where Kevin worked under his aegis as a doctoral fellow in the NIH/Oxford program.

“Kevin is brilliant, a very talented researcher and very, very modest,” says Sher. “He is a magnet for awards, but I never heard him say a word about any of his accomplishments. The whole family is just remarkable.”