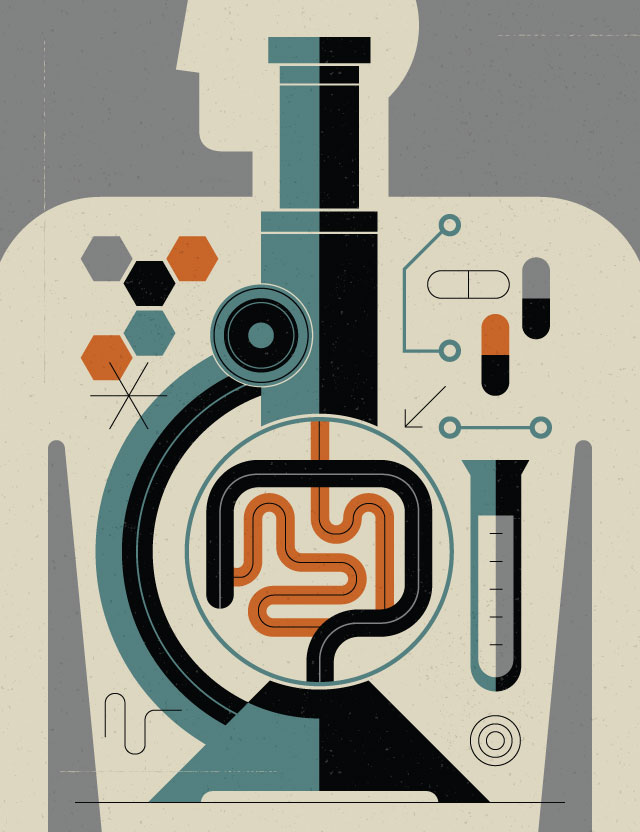 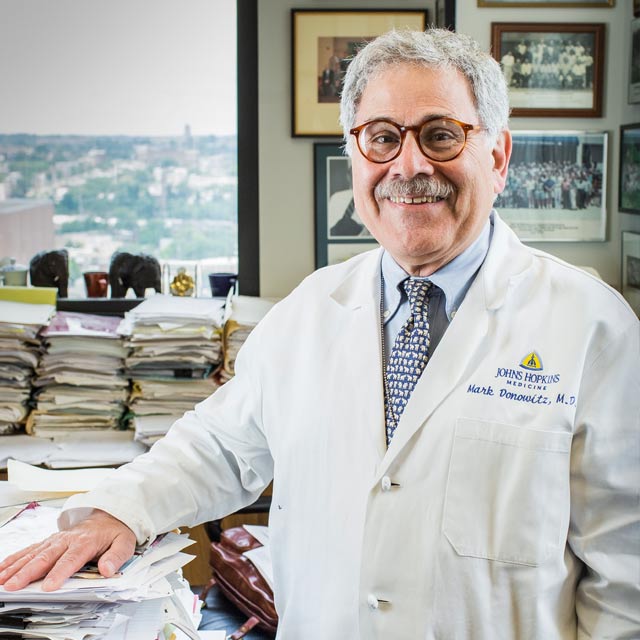 Mark Donowitz anticipates growing enteroids from individuals with colitis and Crohn’s disease in order to better understand the pathophysiology of those diseases—and to provide patients with custom-tailored treatment regimens.

Necessity is the mother of invention; good things come in small packages; and a mouse is not a human with a tail.

The first two are aphorisms whose origins are lost in the mists of time. The third is a direct quote from Mark Donowitz, professor of medicine and physiology in the Division of Gastroenterology and Hepatology and director of the Hopkins Conte Digestive Diseases Basic and Translational Research Core Center. But all three go a long way toward explaining why Donowitz and his colleagues at the National Institutes of Health-funded center now find themselves on the cutting edge of tissue engineering.

Together with gastroenterolgists Nicholas Zachos and Olga Kovbasnjuk, Donowitz is building intestinal organoids: tiny 3-D replicas of the human gut that represent a huge leap forward from conventional cell cultures and animal models. Grown in the lab using human intestinal stem cells that have been harvested from biopsies, these miniature guts, or enteroids, promise to revolutionize gastroenterology. And when combined with other organoids, e.g., miniature livers and brains, they are destined to serve as an essential component in an integrated human-on-a-chip.

Donowitz and his team, which includes Ph.D. student Jiany Yin and postdoctoral fellows Julie In and Jennifer Foulke-Abel, are particularly interested in finding drugs to combat the major diarrheal diseases, such as cholera, E. coli and rotavirus infection, that account for roughly 4 percent of all deaths worldwide and kill approximately 800,000 children per year. Until recently, the search for antidiarrheal therapies has been stymied by the same limitations that have hindered drug development in general: More than 90 percent of all new drugs fail clinical trials, in large part because the animal models used in testing often cannot predict how the drugs will affect human beings.

Human cell cultures can be problematic as well. For instance, healthy epithelial cells extracted from the gut have a life span of only seven days, so researchers rely instead on colon cancer-derived cell lines. These lines last longer in the petri dish, because their tendency toward programmed cell death has been suppressed. But cancer cells don’t behave like normal ones, and the drugs developed with them can be ineffective and unsafe. And even the best cell cultures aren’t perfect: Thomas Hartung, a toxicologist and director of the Johns Hopkins University Center for Alternatives to Animal Testing, points out that ordinary cell cultures simply lack the physiological characteristics of real human tissue.

To overcome these shortcomings, Donowitz and his colleagues, inspired by the work of Dutch researcher Hans Clevers, began building miniature human intestines in the lab in 2012. The models are grown from stem cells harvested from the base of the intestinal crypt—stem cells that can, says Zachos, generate all of the differentiated epithelial cells in the human gut. (They do not, however, produce muscle and nerve cells.) Unlike traditional cell cultures, the resulting 3-D organoids also recapitulate all of the segments of the human gut, from the duodenum to the jejunum—a crucial feature, since for reasons that are not yet clear, different diarrheal pathogens favor different segments: Enterohemorrhagic E. coli, for example, adheres to the colon, while rotavirus and cholera prefer the upper small intestine.

Using sophisticated microscopy techniques, Kovbasnjuk, who directs the Imaging Core at the Hopkins Conte Core Center, has demonstrated that enteroids also reproduce the same processes of sodium absorption and chloride secretion that drive water absorption and electrolyte transport in the gut. By observing and measuring how those processes are disrupted by diarrheal disease, the researchers hope to discover which specific ion transporters are affected and how—information that should help them develop new antidiarrheal drugs.

They are already making progress: Zachos, who directs the Mouse Physiology Core, is currently using enteroids to optimize a cell-penetrating peptide that stimulates sodium absorption, halting the water loss that results when a diarrheal agent like cholera toxin induces excessive chloride secretion. (The peptide acts on NHE3, the principal sodium-absorbing protein in the gut.) And the team is collaborating with colleagues at the University of California, San Francisco, to develop high-throughput screening techniques to identify additional drug targets.

Donowitz’s enteroids represent one piece of a larger, government-funded project aimed at developing a human-on-a-chip: a series of miniature organ models all connected to one another via microfluidic pumps and channels. The impetus for such a device stemmed from a 2011 report that the Department of Defense commissioned from the National Academy of Sciences. The DOD wanted an animal model that could be used to rapidly develop medical countermeasures like drugs and vaccines against biological weapons.

But the National Academy of Sciences committee that produced the report—a committee on which Hartung served—recommended an entirely different approach: namely, a collection of human organ equivalents grown from stem cells. That spurred an unusual alliance between the DOD, the FDA and NIH, which have since committed more than $200 million to the goal of putting multiple organoids, including guts, livers, kidneys and brains, on a single platform.

Both Donowitz and Hartung, who has developed a 3-D model of the human brain in order to explore the neurotoxicity of various chemical agents, have received funding to pursue that goal. Donowitz, for example, has joined forces with engineers at Johns Hopkins and the University of Washington to develop a platform that will allow him to connect his enteroids to renal and hepatic organoids developed elsewhere. Hartung is working with engineers at Harvard and the University of California, Berkeley, to develop a platform that will allow his miniature brains to play nicely with other organoids, too.

Combining organoids will help scientists understand life-threatening multiorgan conditions like hemolytic uremic syndrome, which occurs when infections originating in the gut pass into the bloodstream and damage the kidneys, as well as chronic ones like metabolic disorder. And it will shed light on how chemicals that affect many different interacting systems in the body can lead to developmental disorders like autism.

There is plenty to be done with enteroids themselves, however. Donowitz and his colleagues are currently working with Pankaj Pasricha, director of the Center for Neural Gastroenterology, to introduce nerve cells into their micro-organs—a significant advance, since both cholera- and rotavirus-induced diarrheal disease are neurally mediated. And Hai-Quan Mao, a core faculty member in the Translational Tissue Engineering Center, is helping them develop microfluidic systems to mimic peristalsis, as well as the flow of water and blood through the gut. As they become more lifelike, the enteroids will yield even more accurate experimental results. These results will have the added benefit of providing better data for computational biologists, whose models, Hartung notes, are only as good as the information they are fed.

In the future, enteroids may hold special promise for regenerative and personalized medicine. Zachos, for example, is working with a pediatric surgeon at the University of Southern California who wants to use enteroids to provide intestinal transplants for children with short bowel syndrome. Researchers in Japan have demonstrated that enteroid tissue can patch epithelial ulcers in animal models. Donowitz, meanwhile, anticipates growing enteroids from individuals with conditions like colitis and Crohn’s disease in order to better understand the pathophysiology of those diseases—and to provide patients with custom-tailored treatment regimens. (Hartung has already begun moving along this path, reproducing his brain model using cells from a patient with Down syndrome.)

“Nature’s way ahead of us,” says Donowitz, acknowledging the work that remains to be done. “But I think we can learn a lot. And this is just the beginning.”