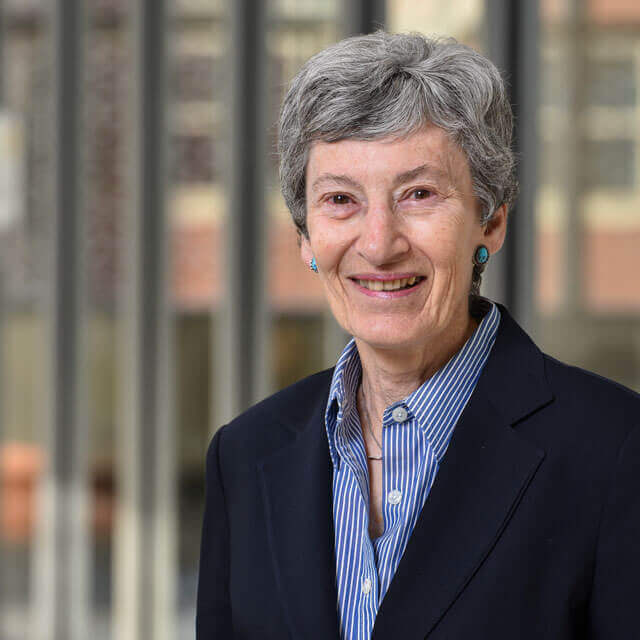 As an undergraduate at Radcliffe University in the 1960s, Blanche Alter ’67 decided she wanted to work in medical research. She chose the Johns Hopkins University School of Medicine because of its strong reputation in the field of research.

At Johns Hopkins, where she was one of five women in a class of 92 people, she met world-renowned pediatric hematologist William Zinkham, a school of medicine faculty member. “He was a wonderful teacher and was influential in my decision to go into pediatric hematology,” she says.

Today a senior clinician in the Clinical Genetics Branch in the Division of Cancer Epidemiology and Genetics at the National Cancer Institute, she wants others to have the same quality education. Having grown up in Toronto, Canada, she made a generous gift to the school of medicine to establish the Blanche P. Alter, M.D., M.P.H. Endowed Scholarship Fund to support international students. Her gift was made as part of the school’s 125th anniversary scholarship initiative.

She received a similar scholarship targeted toward international students during her time at the school. “[That scholarship] helped offset the amount of loans that I had to take and the amount that my parents had to pay,” she says.

Then, in 1999, she came back to Baltimore to pursue an M.P.H. at the Johns Hopkins Bloomberg School of Public Health. Her first position after completing her M.P.H. was with the National Cancer Institute’s newly formed Clinical Genetics Branch in the Division of Cancer Epidemiology and Genetics, where she continues to work today.

In her research work, which includes authoring more than 350 publications, she has developed cohorts and collected massive amounts of data from patients and family members who have one of four rare, cancer-prone hematologic genetic syndromes. She uses the data to determine the risk these patients have of developing certain cancers compared to the general population and their risk of developing these cancers by age, and to develop cancer screening protocols. For example, those who have either Fanconi anemia or dyskeratosis congenita (diseases of the bone marrow) have higher rates of head and neck cancer, so they need to visit a head and neck surgeon and a dentist fairly frequently for screening. Her current research is focused on determining which genes are mutated in patients with rare diseases who are likely to develop cancer.

Having received her United States citizenship in 1999, she says she wants to pay it forward to other international students through her scholarship fund. “In particular, I think the international student who is not eligible for a lot of American scholarships would benefit from attending Johns Hopkins medical school, because I benefited from that,” she says.

“I think the international student who is not eligible for a lot of American scholarships would benefit from attending Johns Hopkins medical school, because I benefited from that.”