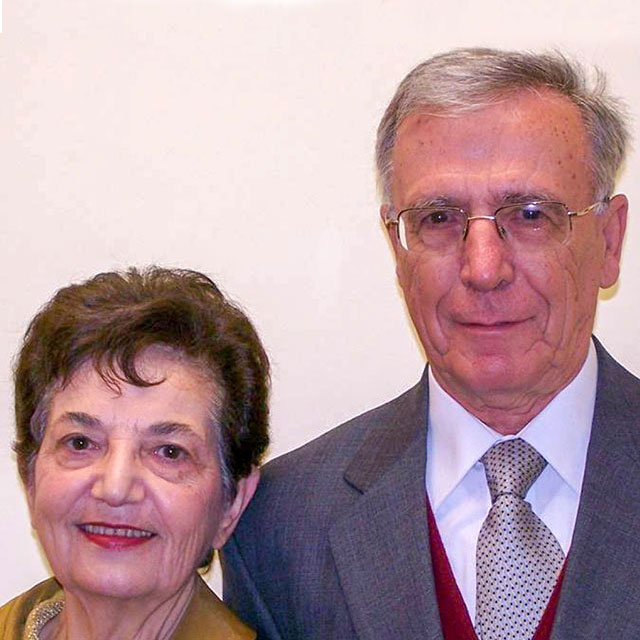 When Ekaterina “Catherine” Limas and her husband, Constantinos J. Limas, left Greece in 1968 for the United States, they knew no one. Equipped with freshly minted medical degrees from the University of Athens Medical School, they were fortunate to meet Abou D. Pollack, a professor of pathology at the Johns Hopkins University School of Medicine. He helped them find a place to live and encouraged Catherine’s ambition to become a researcher. “He took a paternal interest in us, supporting and encouraging us,” she says. “I owe a lot to him.”

Over the next several decades, Catherine and Constantinos dedicated their careers to research, service and teaching. When her husband of 48 years passed away in 2014, Catherine wanted to create a research award in his memory in the Johns Hopkins Department of Pathology. The Catherine and Constantinos J. Limas
Research Award provides seed research funding annually for a junior pathologist. “The Johns Hopkins Department of Pathology does impactful work in basic sciences, and more people are needed to work in research because they are passionate about it,” says Catherine. “Providing seed money for young investigators is important because we need their new and exciting ideas.”

Catherine feels strongly about helping other researchers because she received financial support from the school of medicine that helped launch her research career. After their first period in Baltimore—when Catherine attended the Pathology Residency Program at the Baltimore City Hospital (now the Johns Hopkins Bayview Medical Center), and Constantinos completed his residency in internal medicine at Mercy Medical Center—the couple moved to Washington, D.C. There, Constantinos completed a fellowship in cardiovascular diseases and clinical pharmacology at the Washington DC VA Medical Center, and Catherine was a resident in anatomical and clinical pathology and an instructor for a year at Georgetown University. They returned to Baltimore in 1973 so Constantinos could become an assistant professor in cardiology at the school of medicine and Catherine in pathology.

It was during this time that Catherine, then also assistant chief of pathology at Baltimore City Hospital and director of the hospital’s blood bank, received an institutional grant from the school of medicine to study vascular changes in kidneys preserved for transplantation. This was the beginning of preserving kidneys from car accident victims for transplants at a time when 60 percent of those transplants were failing. Her research found that the majority of kidneys preserved using continuous pulsatile perfusion, or a pump with fluid circulating around the kidneys, developed lesions, while the kidneys preserved through hypothermia, or placed on ice, did not. Her findings were published in the American Journal of Pathology in 1977 and significantly improved the way kidneys were preserved during transportation.

In 1975, Catherine and Constantinos joined the faculty at the University of Minnesota School of Medicine, where they were both promoted to full professors in 1985. Throughout their research careers—in which they both had ample funding from institutions such as the National Institutes of Health and the American Heart Association—Constantinos studied hypertension and the metabolism of the heart, while Catherine focused on the pathology of neoplasia, as well as cardiovascular pathology and biochemistry.

Catherine shares that her husband was a man of high intelligence who spoke several languages and never complained or raised his voice. “Our thinking, our knowledge and our skills were complementary to each other,” she says. “We were both dedicated and committed to each other and our work.”

M. Kathryn Grabowski, Ph.D., Sc.M. is this year’s Catherine and Constantinos J. Limas Research Award recipient. Her research focuses on the epidemiology and transmission of HIV as she leads the new field of viral phylodynamics. She is grateful to Dr. Limas for her commitment to help launch the careers in academic medicine of junior faculty like her. She shares, “It is inspiring that Dr. Limas is paying it forward and making it possible for future generations to succeed.”