No Shrinking Violets, These.

Plants are a living legacy of Hopkins greats. 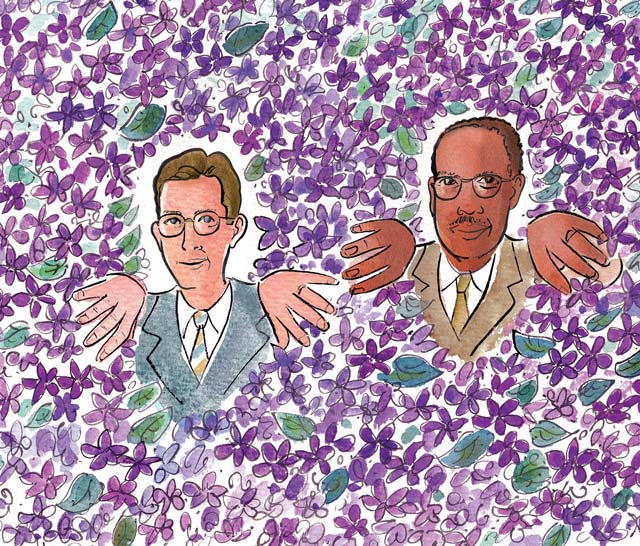 They’re vibrant and gorgeous. The African violets that now bloom luxuriantly on Johns Hopkins Hospital’s CMSC 12 are not only souvenirs of some of medicine’s great moments, but in one way, they’re literal keepers of history.

Some 30 plants live today in a sunlit spot in Hopkins’ cardiac surgery research lab and various cardiac surgery offices, all under the watchful eye of Jeffrey Brawn, a research technician. Brawn gladly cares for his leafy charges. He does it especially well, perhaps, because their legacy is so strong.

The “mother” African violet, he explains, has ties to two Hopkins greats—Alfred Blalock and Vivien Thomas. Among their many achievements, the two men, along with pioneer pediatric cardiologist Helen Taussig, were the first to overcome surgical hurdles to saving “blue babies” from certain death. The surgical solution they developed was first performed in 1944. In the years since then, the technique and its offshoots have saved millions of lives.

And the violet connection?  Blalock had bought a single, hardy plant as a gift for Thomas—no one knows where. And Thomas had a green thumb. The violet was so robust that he made leaf cuttings for anyone who asked until he retired from Hopkins in 1979. Half of Thomas’ violets went to the chief of cardiac surgery, Vincent Gott. Thomas gave the rest to his lab coordinator, Jean Queen, who, in turn, lovingly tended and shared the plants until her retirement. “All of the techs revered Vivien Thomas,” says Queen. “That and all the history made the violets special.”

Now, on Brawn’s watch, the historic flora bloom in cardiac surgeons’ offices worldwide. That’s because he generously “gifts” rooted leaves to notable Hopkins alumni—many now chairs of cardiac surgery departments—who return to Hopkins to lecture. Brawn cautions international recipients about laws on importing vegetation, but he recalls one alum who took the rootling anyway, washed all the soil off, and tucked it gently in his suitcase. The cardiac surgeon later reported that the trip to the United Kingdom went well and the plant is now flourishing.

Like Queen before him, Brawn has become something of a horticulturist in his drive to preserve these legacy plants. He knows about the plants’ high calcium requirements, for example, and exactly how long to root leaves before potting them. “I never had African violets until these, and I’m amazed,” he says. “You think they’re delicate but they can tolerate the manhandling I give them during repotting—and that says something.”