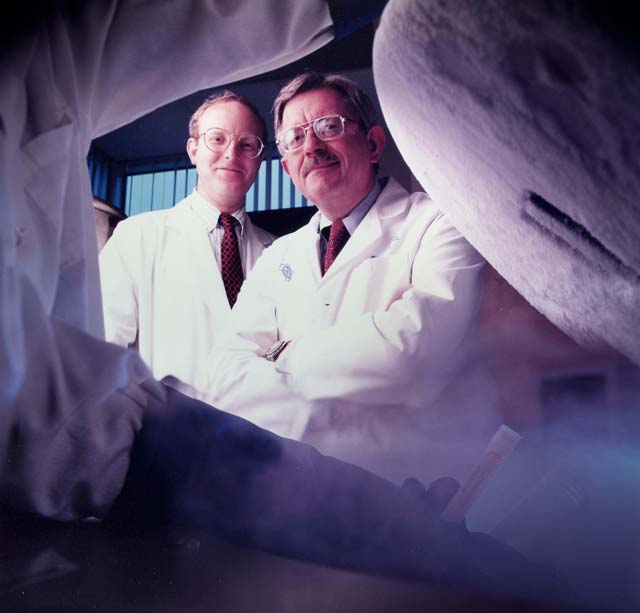 In the 1980s, not too long after Robert Gallo co-discovered the HIV virus, Rein Saral ’69 and H. Kent Holland were part of the team that performed the first bone marrow transplant on a patient who had both AIDS and lymphoma. “Our main [goal] was to treat the lymphoma,” says Saral, a School of Medicine faculty member at the time. “But we thought there were ways we could prevent the [patient’s] new cells from being attacked by the AIDS virus.” After destroying the patient’s old blood system, along with the virus, the Hopkins team decided to prescribe AZT to prevent the patient’s new donor blood system from being reinfected with AIDS.

“It was an outlandish idea at the time,” says Holland, then a fellow in hematology-oncology/bone marrow transplantation. But, although the patient died about a month after the surgery because his lymphoma returned, the team’s hypothesis was correct. “When we did an autopsy, we couldn’t find the AIDS virus.”

Today, Holland—who is now medical director of the Blood & Marrow Transplant Program and co-director of the Stem Cell Processing Laboratory at Northside Hospital in Atlanta, Georgia—credits Saral with helping him think outside the traditional paradigm of medicine. “At Hopkins, you were constantly being pushed to question the current status quo and to come up with new ideas,” he says. “To this day, I still don’t accept the way things are.”

In honor of his mentor, Holland has started the Rein Saral, M.D., Scholarship Fund to support students in the field of oncology who are enrolled in the School of Medicine’s MD/PhD program—a true tribute to Saral, who went to medical school, did his fellowship, and was on the faculty at the School of Medicine for 15 years.

Holland came to Johns Hopkins as a fellow in 1985 because of the School of Medicine’s reputation for bone marrow transplantation therapies. This decision turned out to be “one of the most important parts of my development and my career,” he says. In part, that’s because he met Saral, who gave him professional opportunities he may not have had at other medical centers, from working on clinical trials to publishing papers.

In 1991, when Saral went to Emory University in Atlanta to lead a new bone marrow transplantation program, he recruited Holland to join the team. There, Holland started a stem cell processing lab and a donor facility, wrote clinical trials and protocols, and provided care to leukemia and breast cancer patients—a large level of responsibility for someone in the early part of his career. “Dr. Saral gave me a tremendous opportunity to learn how to build transplant programs from the ground up,” Holland says.

Along with paying tribute to Saral, who is a professor at the Emory School of Medicine and associate director of the Winship Cancer Institute, Holland wanted to start the scholarship to support future medical researchers. “I was given the opportunity at a very young age to do things that people don’t get a chance to do until they’re older,” he says. “I felt an obligation to continue the tradition to help the next generation and to give them the same opportunity.”

Saral, who is “really grateful to Hopkins for what it has enabled many of us to do,” says that he was surprised and proud to learn about the School of Medicine scholarship when Holland called him at the end of last year. “Giving back to an educational institution is absolutely what is needed in our time today,” he adds. “Kent is a superb clinician, and he’s an example of the kind of [philanthropic] people who graduate from programs at Hopkins.”

“I was given the opportunity at a very young age to do things that people don’t get a chance to do until they’re older. I felt an obligation to continue the tradition to help the next generation and to give them the same opportunity.”