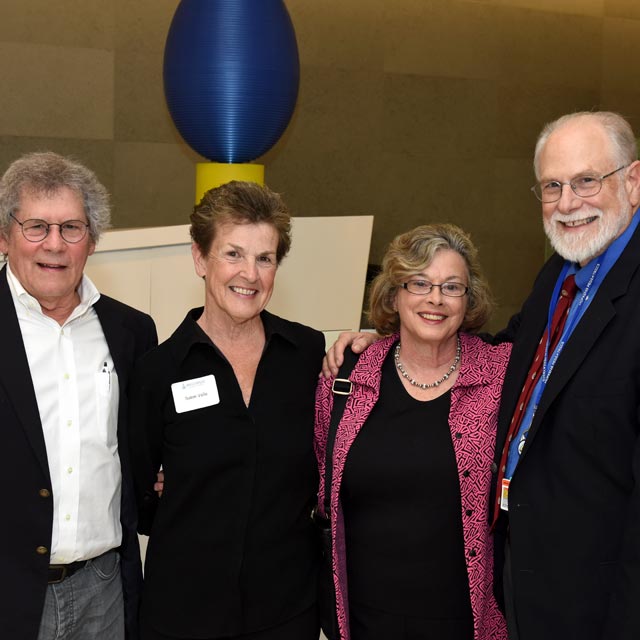 Left to right: David and Susan Valle, with Barbara and George Dover

How do you encapsulate a 44-year career in academic medicine marked by major scientific breakthroughs, prestigious teaching awards and top leadership positions? Some 140 current and former faculty members, house staff and pediatric residents found some unique ways—some serious, some amusing, but all affectionate—in April to honor George Dover, who stepped down June 30 after two decades as director of the Department of Pediatrics and co-director of the Johns Hopkins Children’s Center.

On a more serious note, former chief resident Megan Tschudy called Dover the “ultimate champion for education,” citing his consistent presence at Wednesday Grand Rounds and Friday morning reports, and, following the thinking of pediatrician/geneticist Barton Childs, always asking, “Why this child, why this disease, why this time?” She added that during Dover’s tenure as director, some 1,000 pediatric residents and fellows trained at Johns Hopkins. And she acknowledged his influence by awarding him the Alexander “Buck” Schaffer Award for Outstanding Contribution to the Teaching of House Officers.

“You’ve always stressed that we’re here to add to life, not to dwell on what we can get from life,” says Tschudy. “We thank you for what you have added to every stage of development here in our lives.”

Pediatric residency director Janet Serwint noted that in academic medicine, the term “triple threat” is used to distinguish leaders. “Dr. Dover,” she said, “is more of a quintuple threat, known not only for his work in clinical care, education and research, but also as an amazing mentor and a leader who stresses reflection as a tool to reinforce learning.”

Julia McMillan, who worked with Dover for 22 years and recently retired as executive vice chair of pediatrics, agreed that Dover will leave a lasting imprint on the residency program. The amount of time he gave families as a clinician, she added, is another hallmark.

“He didn’t leave the clinic until very late at night—much to the chagrin of residents—because he needed to give patients and families whatever they needed,” said McMillan.

Former chief resident Cozumel Pruette cited Dover’s early advocacy for a new home for the Children’s Center, which became The Charlotte R. Bloomberg Children’s Center building when it opened in 2012. “Dr. Dover changed the face of Johns Hopkins pediatric medicine,” said Pruette. “It was an incredible privilege to learn from him.”

Another former chief resident, Michael Barone, described Dover as an engaged director intensely interested in the paths of both residents and faculty members. “He wanted to know about every hill and valley, every success and every failure, and he wanted to be involved,” said Barone.

Acknowledging his years of positive influence on the faculty and staff, Barone and Serwint announced the establishment of the George J. Dover Faculty Mentoring Award, to recognize a faculty member each year for excellence in mentoring.

“I had this job for 20 years, and I stayed here for 44 years because of what I’m looking at now: the phenomenal people who make up the faculty, the house staff and the training program, the fabric of this very special place,” Dover said. “What really made this the best job in the world was the privilege of having the opportunity to steward some of the best and brightest people who have gone on to do incredible things for children and their families.”