Through clinical studies and advocacy, Michael Blaha is improving the odds for those most at risk for cardiovascular disease. 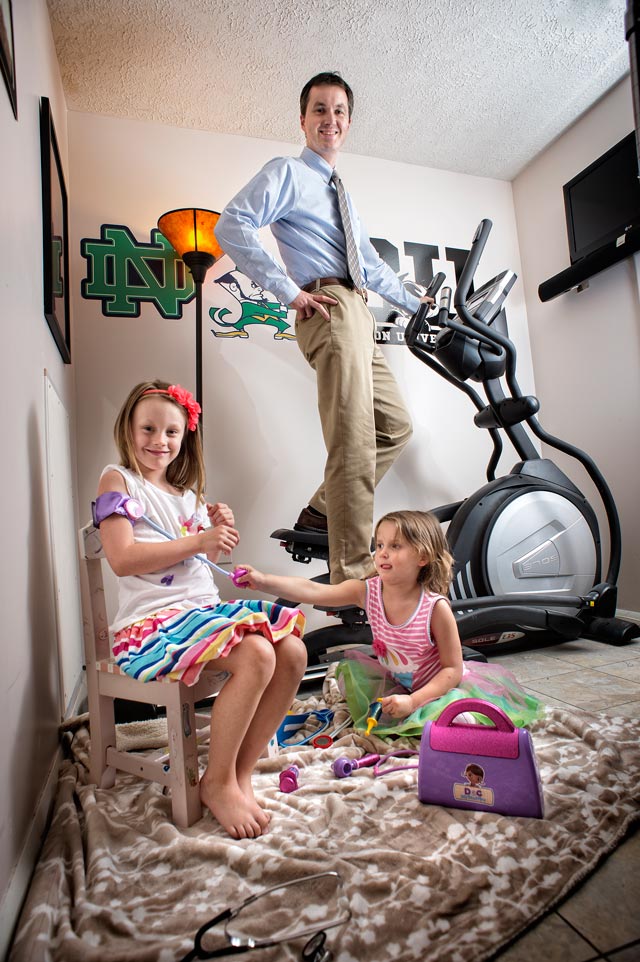 Blaha at home with daughters Krysta (left) and Sienna.

Michael Blaha’s ambition in the field of preventive cardiology is no less than a revolution in stroke and heart attack prevention.

“It sounds grandiose, but we like to talk about a paradigm shift,” says the 34-year-old cardiologist, who has already published two books and more than 75 research papers and is the author of a popular blog, Heart-Smart Living.

Blaha, who is director of clinical research at the Johns Hopkins Ciccarone Center for the Prevention of Heart Disease, believes the future is a judicious use of medication combined with the best new technologies—from quick and relatively inexpensive CT scans to cellphone apps that help doctors monitor and coach their patients as they change how they live.

Roger Blumenthal, the longtime director and founder of the Ciccarone Center, calls Blaha “a true superstar.”

“Mike has accomplished more from a cardiology clinical research point of view than anyone I know of in the 20 years I have been on the cardiology faculty,” says Blumenthal. “He has been responsible for numerous clinical research ideas that can really move the risk assessment field forward.”

Blaha has led studies that critically examine the usefulness of cardiac CT scans to determine who has advanced coronary plaque buildup and who doesn’t. A paper he published in The Lancet in 2011 attracted a lot of attention for its conclusion that, based on data from MESA (the Multi-Ethnic Study of Atherosclerosis), a coronary calcium scan is much better at predicting heart attack risk than a test for C-reactive protein, which indicates inflammation throughout the body.

“I anticipate that the next set of cardiovascular risk assessment guidelines will pay much more attention to the lessons of Mike’s work and advocate for greater use of coronary calcium scans to accurately determine which patients should go on aspirin and statin therapy, rather than relying on the current risk score that is dominated simply by date of birth,” says Blumenthal.

Blaha has also led important research on the impact of improved fitness, finding that a person’s fitness level and coronary calcium score are the two best predictors of cardiovascular health.

He traces his passion for preventive medicine to a semester he spent during college at Biosphere 2, a glass research lab in the Arizona desert, where he fell in love with the idea of sustainability. “I realized that prevention is the only way to make medicine sustainable,” he says. He went on to earn both his M.D. and an M.P.H.—in clinical epidemiology and biostatistics, respectively—at Vanderbilt University, where he was named top postdoctoral clinical researcher.

With three daughters—Krysta, Sienna and Adriana—and his wife, Kerry, an anesthesiologist, Blaha has to work extra hard in his own life to reduce the risk factors he preaches against. “My ulterior motive for studying heart disease is so I can figure out how to be healthy and strong for as long as my girls need me!” he writes in his blog. So he wears one of the pedometers he prescribes, often holds walking instead of sitting meetings with the fellows he supervises and jumps on the elliptical trainer at home, after the girls are tucked in, to complete the day’s requisite 10,000-plus steps.

“Working out late at night isn’t something I’d recommend to my patients,” he admits ruefully. “But it does seem to work for me.”

In 2013, a $10 million gift from Irene Pollin made possible a transformative expansion of the Ciccarone Center’s mission. Center director Roger Blumenthal is now the Kenneth Jay Pollin Professor of Cardiology. There are three new Pollin postdoctoral fellows: Parag Joshi, Seth Martin and J. Bill McEvoy. And the center will now be able to expand its educational efforts, including implementing new heart attack and stroke prevention guidelines throughout the Johns Hopkins medical system.