Standout in the NFL

Ever since she was a child, Leigh Ann Curl ’89 has stood out in a crowd. She has described herself as “the tomboy of the neighborhood … the little girl who had the baseball glove on, the softball in her hand, and hats.”

At 6-foot-1 inches, she attended the University of Connecticut on a basketball scholarship and earned Phi Beta Kappa for hitting the books with as much skill as the basket. (She finished her four-year career among the all-time leaders in points and rebounds.) An outstanding medical student, Curl completed her general surgery internship at Johns Hopkins in 1990, and when a group photo of the 32 interns was taken, “I was the only female.” The same happened when she was interviewing to match in orthopaedic surgery for residency. “I didn’t really see any other females on the interview circuit. It was all men,” she recalls. She did her residency at Johns Hopkins too.

Women orthopaedic surgeons now are “far more than they were,” Curl says, yet she remains a standout in one particular respect: She is the only female who is head orthopaedic surgeon for a National Football League team—the Baltimore Ravens, a position she’d held since the 2001 season.

Curl, 52, had been with the Ravens since 1997, when she left the Johns Hopkins faculty to help establish a sports medicine department at the University of Maryland Medical Center, which had gotten the nod to be the Ravens’ medical provider. Thanks to the Ravens’ 2000 and 2012 Super Bowl victories, she has two of those diamond-bedecked championship rings.

Curl is responsible for the care of the entire preseason roster (as many as 90 players), as well as the 53-man active roster during the season and 20 or so players who are on practice squads and the injured-reserve list.

“You have to realize when you’re taking care of these guys that even things you might think of as minor injuries can have a huge impact on these players’ ability to perform and keep a spot on the roster, have a long career, and then, hopefully, have a quality of life beyond football, without a lot of disability,” Curl says. “It’s always a balancing act. That’s the art of sports medicine.”

Curl is especially adept at balancing not only her Ravens duties but a private orthopaedic and sports medicine practice at Baltimore’s Medstar Harbor Hospital, where she has been since 2005 and performs some 500 procedures a year. Her scarce spare time is devoted to her children: a 3-year-old son and 5-year-old daughter. 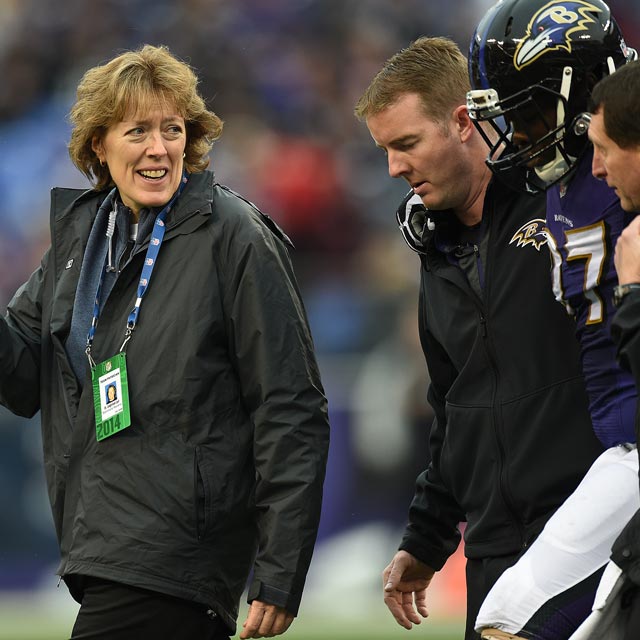