A Father of CPR

In 1957, with a flash of inspiration that foresaw the lifesaving potential of forcefully applying one hand pressed palm down on another in the middle of a heart patient’s chest, cardiac surgeon James Jude became one of three men credited with making The Johns Hopkins Hospital the birthplace of CPR. Tens of thousands of people today who suffer a cardiac arrest beyond the reach of an electronic defibrillator owe their lives to him.

Jude died on July 21, 2015, in Coral Gables, Florida, of complications from a rare Parkinson’s disease-related condition. He was 87.

A surgery intern, resident and fellow before joining the faculty, Jude had been observing the work of his fellow CPR pioneers, electrical engineers William Kouwenhoven (1886–1975) and Guy Knickerbocker (1932– ), as they perfected the development of a closed-chest heart defibrillator and first applied it to a patient in 1957.

In earlier experiments on dogs, Knickerbocker noticed that even before the defibrillator’s electrical shock was applied to an animal’s arrested or irregularly beating heart, a slight rise in blood pressure occurred when the electrodes were pressed on the dog’s chest. Jude called this a wonderfully “chance observation to a fertile young mind.” He immediately recognized that Knickerbocker’s discovery could be developed into a method for external cardiac massage—a means not only for restarting a stopped heart but keeping it beating long enough to sustain a patient’s survival until additional treatment could be provided.

In 1958, both Jude and another Johns Hopkins surgeon, Henry T. Bahnson (1930–2003), were the first to successfully resuscitate patients with external cardiac massage.

Kouwenhoven, Knickerbocker and Jude all later were dubbed the fathers of CPR—with Jude’s contribution effectively ending the previously drastic measure used at Johns Hopkins of quickly cutting open a dying patient’s chest and cracking the sternum to rhythmically squeeze a faltering heart by hand until a defibrillator could arrive. Jude had shown that powerfully applied palm pressure alone could do the job. 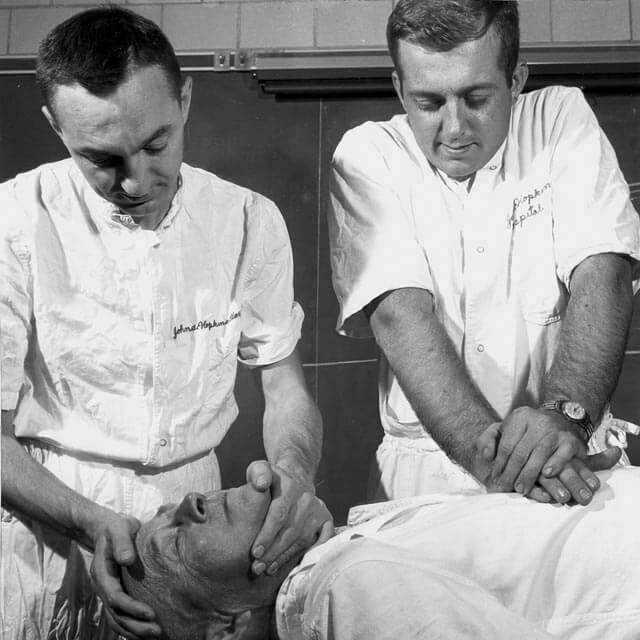