Haller also made his mark in pediatric trauma treatment and biomedical ethics.

Putting yourself in a child’s shoes is part of being a good surgeon” said J. Alex Haller Jr. ’51, surgeon-in-charge of the Johns Hopkins Children’s Center from 1964 to 1991.  He recalled the days when many surgeons treated pediatric patients as “little adults”—not recognizing that children required specialized care—and he was determined to change that.

Haller became a trailblazing pioneer in pediatric surgery, pediatric trauma treatment and biomedical ethics, transforming care at Johns Hopkins and throughout the nation. He died on June 13 at his suburban Baltimore home. He was 91.

A tall, lean, charismatic man with an ingratiating grin and boundless enthusiasm, Haller established the nation’s first pediatric surgery program to require a year of research training—prompting academic hospitals elsewhere to emulate it. He also convinced other Johns Hopkins departments (such as orthopaedic surgery, neurosurgery and urology) to establish pediatric subspecialty divisions, making Johns Hopkins the first to have them.

Noting that half of the youngsters in intensive care had traumatic injuries, Haller established the nation’s first children’s trauma unit in 1973. His impact on pediatric emergency care included his pivotal role in the design and development of the Pediatric Advanced Life Support protocol, as well as creation of Maryland’s statewide emergency medical services system.

Haller attributed his interest in medicine to a childhood bout of what he believed was scarlet fever. The illness left him completely bald for the rest of his life—but he said his contact with caring physicians made him want to become one.

Haller performed some high-profile operations, including a successful 1982 separation of conjoined twins connected at their chests. He also collaborated with Eunice Kennedy Shriver, founder of the Special Olympics, on a biomedical ethics film about the treatment of mentally disabled children, which is still widely used today in medical school curricula.

The author of hundreds of scholarly articles and book chapters, as well as the 1967 book, The Hospitalized Child and His Family, Haller received the American Academy of Pediatrics’ highest surgery award, the British Association of Pediatric Surgeons’ highest honor and the top award from Society of Pediatric Surgery of Bohemia (the Czech Republic). He is survived by his wife of 67 years, obstetrician Emily Simms Haller (HS, 1951–52; faculty, obstetrics, 1975–77). 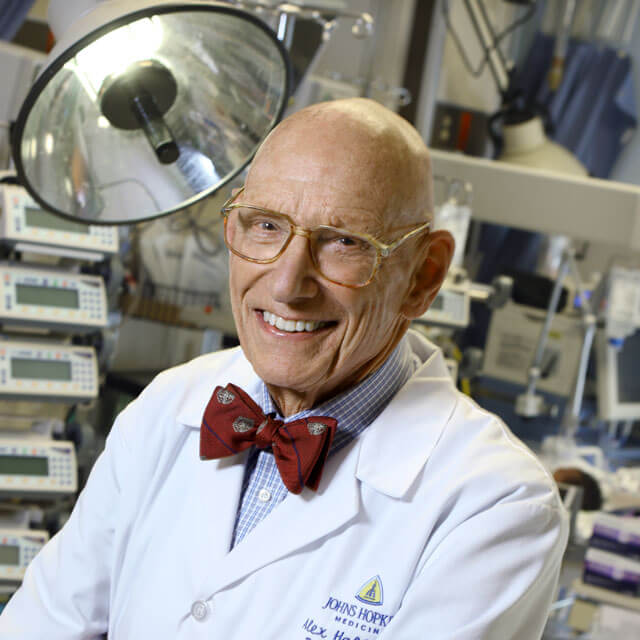