Setting Down the Scalpel

John Cameron will celebrate his 80th birthday with his last Whipple.

After Sept. 29, John Cameron ’62, director of the Department of Surgery from 1985 to 2003, will do what he has seven days a week for more than five decades: Arise at 4:30 a.m., get to The Johns Hopkins Hospital by 5:30 a.m., make rounds, then spend the day seeing new patients and conferring with students and colleagues before heading home around 6 p.m. (OK, on weekends, he leaves around noon.)

The only change in Cameron’s schedule will be the absence of any operations to perform. The world’s foremost practitioner of the lengthy, complex Whipple procedure for battling pancreatic tumors, Cameron has set Sept. 29—his 80th birthday—as the occasion on which he will undertake the arduous, six-hour operation for the last time.

In 2012, Cameron checked the records and found that he’d performed 2,000 Whipples—more than any other surgeon in history. He hasn’t gone over the files again since then but estimates that he now has done around 2,350 Whipples.

“I still feel I do that operation as well or better than anyone else in the world,” he says, “but when you’re 80, you don’t have any colleagues anymore!”

Yet don’t expect him to slow down at Johns Hopkins, where he has been since arriving as a medical student in 1958. “I see probably 30 patients in three different clinics three to four times a week. Patients are referred to us from all over the country. We don’t want to lose those referrals,” he says.

Two young surgeons he has trained will take over many of the Whipple cases—Matthew Weiss (HS, surgery, 2010–12), surgical director of the Johns Hopkins Pancreatic Cancer Multidisciplinary Clinic; and Jin He (HS, fellow, surgery, 2013–15).

Cameron concedes that the lack of 18 hours of Whipple procedures weekly, plus the end of the demanding attention to postoperative care, will leave “a lot of time to fill” on his schedule. His son, Andrew Cameron ’98, surgical director of liver transplantation at The Johns Hopkins Hospital, doesn’t think that will be much of a problem.

The younger Cameron, 46, says he has operated with his father occasionally and thinks he could go on “indefinitely,” but that he is “bowing out of the OR mostly to give the younger generation a chance.” 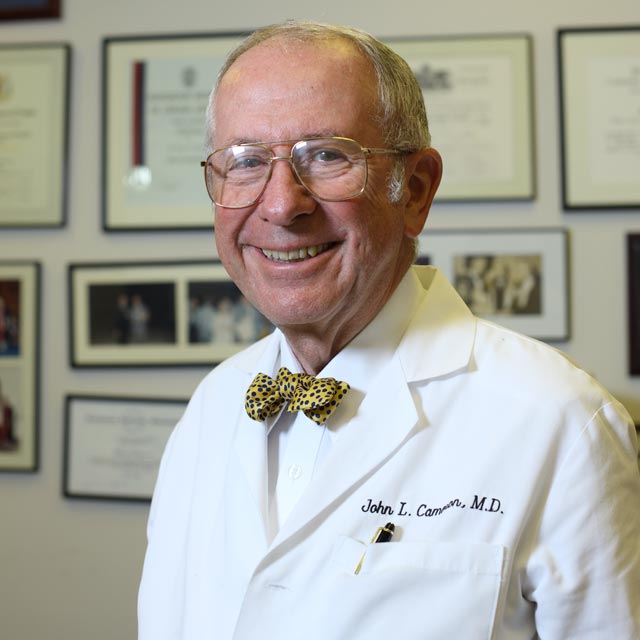