Getting Serious with Semper Fi 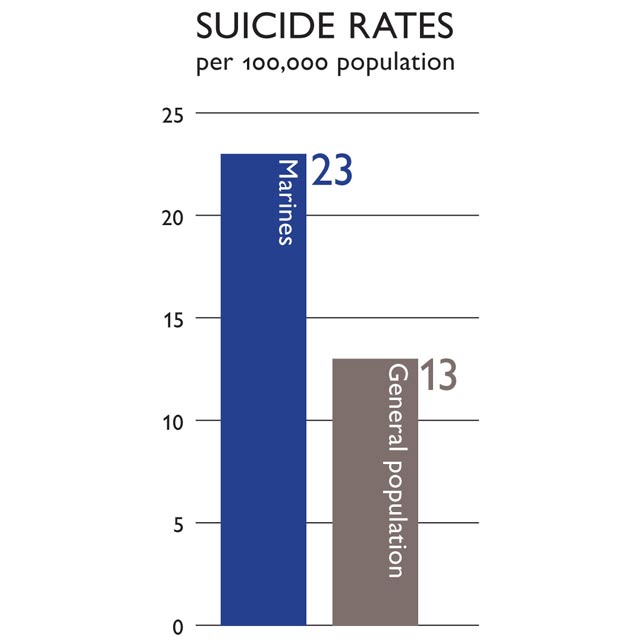 U.S. Marine Corps members are considered among the most physically fit, mentally tough service people around. So Johns Hopkins psychiatric epidemiologist Holly Wilcox wasn’t quite sure what to expect when she was invited to take part in an interactive, discussion-based suicide prevention training program for Marine leaders in Okinawa, Japan.

“I was anticipating uncomfortable, long pauses or having to twist their arms to participate in discussion,” she says. Instead, she found the audience very engaged, with “not a lull” in the conversation. “I was taken aback by how progressive, open-minded and genuinely interested they were.”

Suicide attempts among Marines were at 23 per 100,000 in 2013—nearly twice that of the general population, which had a rate of 13 per 100,000, Wilcox says. Many Marines stationed in Okinawa feel isolated by the high costs of off-base travel and recreation, limited on-base recreation activities, and limited organized off-base recreational excursions, according to a military report.

Wilcox and her counterparts used music, audience polling and real vignettes from Marines who were provided services by the DSTRESS Line, TriWest’s behavioral health hotline, to keep the program lively and engaging. They reinforced the basics of what to do and say when recognizing other Marines who could be at risk for suicide or other bad outcomes; demonstrated how to be more approachable, with examples of nonverbal body language that could be sending certain messages; and empowered them with tools to intervene early instead of waiting until a Marine is in crisis. They also discussed the military mantra “suck it up” and its consequences.

Pre- and post-training surveys showed that participants improved their thinking in almost every area, including knowing at least two mental health or counseling resources available in the community, and being more likely to know what to say and do if they suspect a fellow Marine is at risk for suicide.

“The training we provided, in many ways, is counter to their military training and required a cognitive shift,” Wilcox says. “I left hoping to work more in the future with the U.S. Marine Corps.”

“It was a great place then—but it is a far, far better place now: More diverse, more innovative, more connected to the community that surrounds us, more welcoming. We have Levi Watkins to thank for a lot of those changes. It’s inarguable that Levi’s impact on our hospital—on its culture, on its care—will endure.”