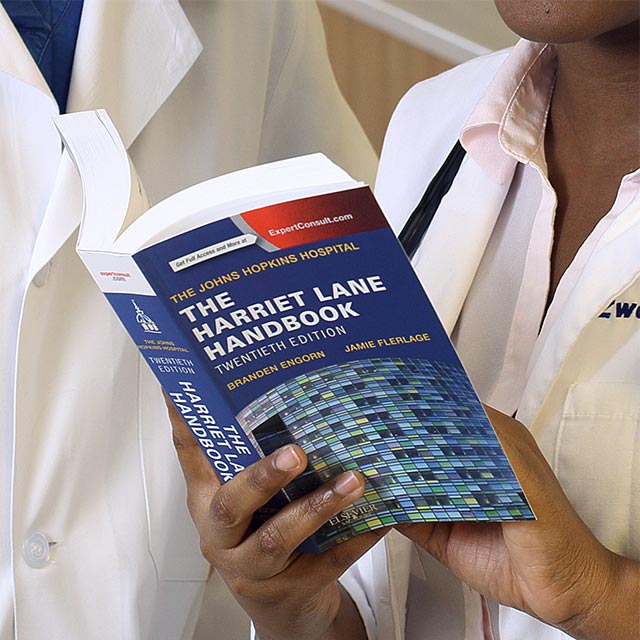 In 1953, six pediatric residents at Johns Hopkins got together and penned a pocket reference book for fellow pediatric trainees. They did so without funds, without supervision and by stealing a few precious hours at a time from their hectic clinical schedules. The idea was to create a collection of essential data that anyone caring for a child would need, helping newly minted clinicians learn the ropes and intricacies of pediatrics.

The book achieved all that, but even in their most ambitious dreams, its “framers” could not have suspected that their handwritten, loose-leaf and hastily collated book would go on to become a veritable pediatricians’ bible, influencing generations of doctors-in-training across the country and—with translations in some 20 languages—all over the world.

Updated every three years and published by Elsevier, last summer The Harriet Lane Handbook celebrated a milestone 20th edition and its 61st birthday. George Dover, pediatrician-in-chief of the Johns Hopkins Children’s Center, says, “It is humbling and astounding to think of all the patients treated by doctors and nurses who have stood by these children’s bedsides, reached in their pockets and pulled this book out to look something up. The Harriet Lane Handbook has played a part in the care of countless children all around the world.”

The book’s defining and most important feature is that it’s written for trainees by trainees. It is edited by the two chief pediatric residents at the Johns Hopkins Children’s Center, and the content is written by senior residents under the supervision of faculty advisers.

Changes in the book’s content over the years have mirrored important shifts in our understanding of childhood disease. For example, the debut edition contained tips on smallpox immunizations and the basics of treating children with measles and congenital rubella. Sixty years later, the latest edition contains information on incorporating genetic testing into the clinic—something pediatricians in the 1950s deemed close to science fiction.

One of the most striking and immediately recognizable changes, however, is the book’s cover. It features The Charlotte R. Bloomberg Children’s Center, which opened in 2012, instead of the all-too-familiar “shaky,” crayon-drawn dome of the historic Johns Hopkins Hospital. “The new cover commemorates our 100th year anniversary as the birthplace of academic pediatrics, but also the dawn of the next century in pediatric care at Johns Hopkins,” says Branden Engorn, pediatric chief resident and book co-editor.

The number of Johns Hopkins Medicine scientists who made the prestigious 2014 Highly Cited Researchers list, compiled by Thomson Reuters, which spotlights some of the most influential researchers of the last decade. To qualify, a scientist had to publish numerous articles from 2002 to 2012 that ranked among the top 1 percent most cited of those within a given subject area. By limiting the time range, Thomson Reuters intended to allow younger influential scientists to be highlighted along with well-established ones. See the full list of Johns Hopkins’ Highly Cited Researchers.