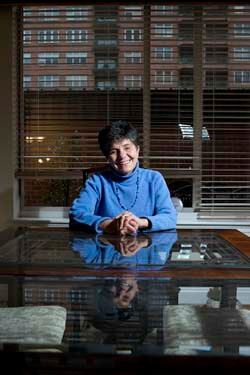 “The one trait of a physician that is intolerable is arrogance,” according to Catherine DeAngelis, University Distinguished Service Professor emerita and former vice dean for academic affairs and faculty (1990-2000).

In a recent Oxford University Press blog post, she offered up the example of a prickly surgeon who is handed the wrong instrument by the nurse assisting him. He screams at the nurse, “You gave me the wrong thing,” and throws the instrument across the room. The nurse immediately hands him the correct instrument, but she feels humiliated and the rest of the surgical team become anxiously fearful of another outburst. “This scene is repeated all too often in hospitals, and the anxiety provocation in members of the health care team can lead to poor patient care,” noted DeAngelis, adding, “Is such behavior unethical or unprofessional—and is there any real difference between the two?”

In her latest book, Patient Care and Professionalism (Oxford, 2014), DeAngelis provides a brief but thought-provoking 191-page collection of essays that seek to answer such questions and to make sure the concept of professionalism is ingrained in every medical practitioner.

After 11 years as the first woman—and first pediatrician—to serve as editor-in-chief of the Journal of the American Medical Association (2000-2011), DeAngelis, 73, might be expected to take it easy now. After all, during that period, she handled some 6,000 articles submitted annually, lectured and traveled widely, and managed to survive a partial bowel obstruction while being held hostage by gun-toting Chechen rebels in Istanbul, Turkey, and then later being hit by a Chicago Transit Authority bus.

But the feisty physician scoffs at the notion of quiescence. “I have plenty of time to rest in a casket,” she says.

Since returning to Hopkins in 2011, DeAngelis has served as an éminence grise, assisting fellows, residents, and young faculty by reviewing manuscripts they hope to publish, and serving as an unpaid advisor to School of Medicine Dean and CEO Paul Rothman.

She also has focused on an issue of immense importance to the future of American medicine: the need to formulate and foster principles of professionalism for everyone who becomes involved in the work of the modern health care team.

When the Oxford University Press asked her to round up experts to write essays on professionalism in medicine, DeAngelis demurred. “I said there are a dozen books that are good on that subject. I want to write about the team.” Unless that gap in the medical literature was filled, she believed, “there will continue to be misunderstandings among the team members and arguments about the exact roles of each member, including the most important member: the patient.”

For contributors, DeAngelis enlisted 17 colleagues she has known for years, among them her husband (child and adolescent psychiatrist James Harris, director of Hopkins’ Developmental Neuropsychiatry Clinic); nine other physicians and four attorneys; a theologian; a nurse; and a medical historian. She also authored a chapter herself.

The role that law and the legal system play in the relationship between clinicians and patients also is explored, as are the fiduciary responsibilities in health care leadership.

Patient care today is awash in growing complexities and even potential dangers, DeAngelis writes, but the “primary professional responsibility of a physician is to protect and advocate for the patient,” just as it always has been.

DeAngelis’ next project, she says, is a memoir recounting how a woman of her generation and background ever got to be editor-in-chief of JAMA.  “I have 280 pages already written on that,” she says. “The title of the book is JAMA Mama.”  Neil A. Grauer