Archives - Solving the Secrets of Sight

Solving the Secrets of Sight 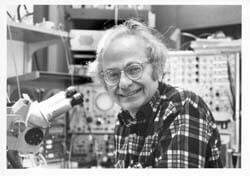 The cramped laboratory that David H. Hubel shared at Hopkins in the mid-1950s with Torsten N. Wiesel looked “like a circus, complete with a tent and exotic animals,” Huber later wrote. The “exotic animals” mostly were housecats, however, wearing electrical headgear attached to electrodes implanted in their visual cortex. Hubel (HS, 1955-56; fellow, ophthalmology, 1958-59) and Wiesel (fellow, ophthalmology, 1955-58; faculty, medicine, 1958-59) would project light and dark spots on a screen, dance in front of the cats, waving their arms, and even (in humorous desperation) show the felines photos of attractive women in an effort to get a single visual neuron to respond.

As they were adjusting their equipment, a single line moved across the screen at a particular angle—and that caused one cat’s neuron to fire. The scientists proceeded to study that single neuron for nine consecutive hours. That work led to a groundbreaking 1959 study that ultimately led to their winning the 1981 Nobel Prize in physiology or medicine, which they shared with CalTech’s Roger Sperry. The Nobel committee singled out their research for solving “one of the most well-guarded secrets of the brain: the way by which its cells decode the message which the brain receives from the eye.”

The son of American-born parents who had settled in Windsor, Ontario, Hubel graduated from the McGill University School of Medicine in 1951 and came to Hopkins in 1954 after his internship and residency. He intended to study neurology but suddenly found himself drafted into the U.S. Army as a physician, assigned to the Walter Reed Army Institute of Research, Neuropsychiatry Division. There he did his first scientific research, delving into the spontaneous firing of single cortical cells in sleeping and waking cats.

He returned to Hopkins to continue his research with Vernon B.
Mountcastle ’42, already recognized as the father of neuroscience. But Mountcastle’s laboratory was undergoing a lengthy renovation, so Huber accepted an invitation from Stephen W. Kuffler (faculty, neurophysiology, 1947-59) to collaborate with newly arrived, Swedish-born Wiesel at the Wilmer Eye Institute.  What began as a six-month research partnership lasted for the next quarter century—and was transplanted to Harvard when Kuffler transferred all nine members of his laboratory (and their families) to Massachusetts in 1959. Hubel remained at Harvard for the rest of his career.  NAG