Archives - Put To The Test

Put To The Test 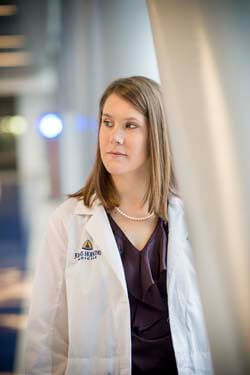 “It’s actually harder to order fewer tests because you have to know more. You have to know which test is going to be helpful in giving your diagnosis.” —Michelle Sharp, chair of the House Staff Patient Safety and Quality Council

As she was treating babies with breathing problems at Hopkins’Children’s Center, pediatric resident Helen Hughes realized that use of “pulse ox” wasn’t as effective in young children as it was in adults. Pulse oximetry uses a small sensor on a patient’s finger to measure oxygen saturation. But in young patients who move frequently, it can give erroneously low readings, ultimately leading to unnecessary tests and potentially longer hospital stays.

Because of possible inaccuracies, pulse oximetry should be reserved for patients who really need it, like those receiving extra oxygen, Hughes advised fellow pediatrics residents recently at grand rounds. Routine overuse of this test, and many others, she reported, has inspired a national campaign designed to improve the way physicians order medical tests and procedures.

Johns Hopkins Medicine is embracing “Choosing Wisely,” a nationwide initiative that seeks to educate physicians and patients about more than 250 tests and procedures that are often unnecessary or inappropriate, such as routine electrocardiogram “stress tests” for patients who are at low risk for heart disease, and MRI or CT scans for uncomplicated headaches.

To date, more than 80 national and state medical specialty societies, regional health collaboratives, and consumer partners have joined Choosing Wisely, according to its sponsor, the American Board of Internal Medicine Foundation. Each participating medical association has compiled a list of five commonly used medications, tests, or procedures—such as prescribing antibiotics for common colds—that physicians and patients should question before ordering (http://www.choosingwisely.org/doctor-patient-lists/).

“We’ve evolved a practice model in this country where it is fairly standard to do many tests and procedures as a reflex,” says Roy Ziegelstein, vice dean for education at the School of Medicine. “Twenty to 30 percent of what we do is wasteful and not supported by evidence.”

Ziegelstein is one of Hopkins’ leaders promoting the Choosing Wisely campaign as part of the education component of Johns Hopkins Medicine’s strategic plan. “This is part of our mission as educators and part of our responsibility in training the next generation of physicians in this country,” he says. “I try to teach students and residents that almost everything we do has the potential to do harm. A simple aspirin tablet has a potential to cause harm. Even something like a chest X-ray has radiation exposure.”

Based on the national recommendations, many residency and fellowship directors at Hopkins have already identified at least one wasteful test or procedure and implemented an intervention to reduce or eliminate it, an effort that will encourage evidence-based, financially responsible, and patient-centered care.

Colleen Christmas, director of the internal medicine residency program at Johns Hopkins Bayview Medical Center, says this approach to medical care marks a significant change from her own residency training in the 1990s. “In my time, the general sense was that physicians should operate completely separate from anything to do with money,” she says. “That behavior resulted in terrible habits.”

The success of Hopkins’ Choosing Wisely effort will depend upon the collaboration of all hospital personnel, according to Julia McMillan, associate dean for graduate medical education. “In training programs, physicians need to understand the process for improving care not only patient by patient but also in the system,” she says. “It’s very unlikely you’re going to make a significant change in a large hospital without teamwork.”

Since initiating the call for examples of unnecessary procedures, McMillan has received proposals related to “a mixture of imaging studies, procedures, and medications that may not be warranted.” Residents in otolaryngology/head and neck surgery, for instance, will work to reduce the inappropriate use of imaging to diagnose sinusitis.

It can be challenging for young physicians to cut back on tests and procedures, says Michelle Sharp, a third-year resident in internal medicine who serves as chair of the House Staff Patient Safety and Quality Council and is helping to coordinate the hospital’s Choosing Wisely initiative.

“It’s actually harder to order fewer tests because you have to know more,” she points out. “You have to know which test is going to be helpful in giving your diagnosis.”

At Hopkins Bayview, such efforts aren’t new. Four years ago, cardiologist Jeff Trost and other physicians there created a program with internal medicine interns and residents called Physicians for Responsible Ordering (PRO), which has reduced cardiac enzyme tests deemed both expensive and unnecessary.

Although evidence suggests that a heart attack can be detected using a blood test for a biomarker called troponin, the group found that other blood tests were also obtained quite often, appearing to add cost without any additional benefit.

“It struck us that this was an opportunity to change behavior,” Trost says. After the Bayview clinicians conducted educational meetings to promote the change, they enlisted computer programmers to include “pop-ups” on physicians’ computer screens when they tried to order the potentially unnecessary tests. Now, one computer pop-up reminds providers that troponin is the preferred test, while another alert indicates when that test is potentially being requested too frequently for a given patient.

Because of these measures, all cardiac enzyme tests were reduced by 66 percent—there was a 30 percent drop in the use of troponin tests alone—over a 12-month period without any clear evidence of harm to patients. Christmas attributes this success to the electronic follow-through. “If you provide an educational intervention alone, that will change predisposition, but you won’t change the actual behavior,” she says.

At Hopkins Hospital, Michelle Sharp reports that members of her team have adopted another incentive for Choosing Wisely: They must drop a quarter into a community “over-testing jar” whenever they realize they’ve called for an unnecessary test. “It’s a fun way to keep the conversation going about over-ordering,” she says, “and it helps us to think critically about every test.”