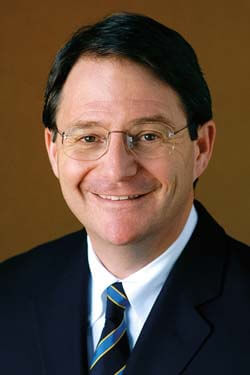 As president and CEO of the philanthropic Prostate Cancer Foundation, Jonathan Simons ’85 says his main goal is to take everything he learned at Johns Hopkins as a medical student, postdoctoral fellow, and faculty member and apply it toward ending death and suffering from prostate cancer.

His work as chief physician scientist at the organization feels quite familiar, Simons says. As with his time at Hopkins, he gets to interact with some of the brightest and best investigators; it’s just that they work in labs around the world. The organization funds prostate cancer research in 18 countries.

There have been several gratifying improvements in the standard of care for both early-stage and advanced-stage patients since Simons joined the foundation in 2007, he notes. Scientists now have “a very good basic science understanding of what happens in the genome and epigenome to drive this cancer,” Simons says. Researchers also have learned to target signaling in the androgen receptor, resulting in two new life-extending medications on the marketplace. Prostate cancer death rates have been reduced by 40 percent since 1990, and with the approval of several medications in the past four years, the death toll should drop even further.

Simons’ interest in cancer began at age 5 when he accompanied his father, a professor at Cornell who suffered from Hodgkin’s lymphoma, to Hopkins for treatments. His father was one of the first 500 patients cured of the disease through participation in National Cancer Institute clinical trials. “I thought cancer experts were heroic because Hopkins doctors kept putting my father back in remission, and then he was cured,” he recalls.

After 12 years on the Hopkins faculty, Simons became founding director of Emory University’s Winship Cancer Institute in 2000. Besides creating the Georgia State Cancer Plan, the state’s tobacco settlement investment in cancer research, he co-directed the National Cancer Institute Center for Cancer Nanotechnology Excellence at Emory and Georgia Institute of Technology.

His foundation now operates the world’s largest funding program for young cancer scientists, benefiting more than 127 investigators. “I think we really are funding the generation that’s going to reduce the death rate of this disease to zero,” he says. Karen Blum