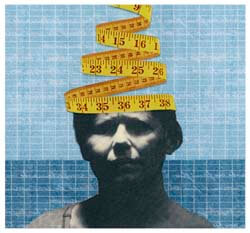 Some 80 percent of people with mental illness are overweight or obese, pointing to an acute need for weight loss programs among this population, notes Hopkins internist and epidemiologist Gail Daumit.

But it’s long been assumed that the mentally ill can’t participate in such programs: They are typically excluded from clinical trials for fear they’ll disrupt the group or abandon the study.

Now a new study led by Daumit holds out promise for righting this disparity.

In a randomized clinical trial sponsored by the National Institute of Mental Health, Daumit and colleagues worked with 10 outpatient psychiatric rehabilitation day programs across Maryland. The researchers enrolled 291 participants with an average body mass index of 36: half with schizophrenia; 22 percent with bipolar disorder; and 12 percent with major depression. Participants were assigned either to an intervention group that received weight management sessions, group exercise classes three times a week, and regular weigh-ins; or to a control group that received one-time basic nutrition and exercise information.

In weight management sessions with the intervention group, Daumit and colleagues emphasized simple health messages like the importance of eating five servings of fruits and vegetables daily, choosing healthier snacks, and participating in at least 30 minutes of moderate-intensity aerobic exercise three or more days a week. They provided opportunities for physical activity through group exercise classes held at the rehabilitation programs, and worked with day program leaders to prepare healthier meals in the commercial kitchens.

Eighteen months later, 38 percent of those in the intervention group had lost 5 percent or more of their starting weight, compared to 23 percent in the control group. Even more encouraging: Some 18 percent of those in the intervention arm lost more than 10 percent of their body weight (compared to only 7 percent in the control arm). Unlike traditional weight loss patterns, where participants lose a lot to start and may gain some back, participants in this study continued to lose weight over the course of the study.

Many participants had triumphs beyond their weight loss. One got a raise at his part-time job because he found additional stamina to move boxes. Two are now teaching exercise classes at their day programs. “When people in our program lost weight, they felt so good they were able to do more things,” Daumit says. Karen Blum