Archives - More Connected Than Ever

More Connected Than Ever 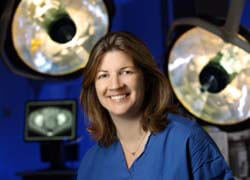 “My passion has been to get minimally invasive surgical options to as many women as possible,” says Fader.

Amanda Nickles Fader’s hands fly as she slices through the ligaments holding her patient’s uterus in place. She snips, cauterizes, shifts the colon, and snips some more. Pretty standard stuff for a gynecology OR—except that Fader is 12 feet away from the woman on the operating table.

Fader is performing a robotic hysterectomy. The procedure involves several small incisions—through the bellybutton and nearby—for the surgical instruments and a camera attached to four robotic arms, which she controls from a highly engineered console. Less invasive than conventional surgery, it leaves the patient with less blood loss, a shorter hospital stay, less pain, and a speedier recovery—and represents just the beginning of a wave of surgical innovations that are improving the lives of many women.

“My passion has been to get minimally invasive surgical options to as many women as possible,” says Fader, who was named director of the Kelly Gynecologic Oncology Service and director of the Center of Minimally Invasive Gynecologic Surgery and Surgical Innovations in the Department of Gynecology and Obstetrics last April. Through the center, in addition to performing minimally invasive surgeries, Fader and colleagues conduct research on new surgical approaches for women with benign and malignant gynecologic conditions.

Fader hasn’t stopped at computer-assisted hysterectomies like this one. Over the last several years she has helped pioneer an even more minimally invasive approach—single-site robotic hysterectomy and laparoscopy—along with several colleagues. In these procedures, surgeons operate through one tiny incision in the navel, potentially further reducing complications and recovery times. Fader and her team are conducting trials to learn whether this approach truly is better than conventional robotic or laparoscopic surgery. The next step on Fader’s horizon is micro laparoscopy, involving three or four tiny, 2- to 3-mm incisions and equally tiny instruments, which she anticipates may result in still better patient outcomes.

“I really enjoy pushing the envelope in terms of how we can innovate and improve surgery for women,” she says.

In Weinberg’s OR 7, Fader sits canted toward the console, a machine that appears to embrace her. A screen offers her a high-definition, 3D image of the surgical site, magnified 10 times. Midair below the screen, her hands weave into jointed grips that translate her every movement into more precise movements of the forceps and scissors inside the patient across the room. Her feet press pedals delivering cautery and changing the camera angle. She is in her element. The 3D visuals and magnification allow her to comfortably perform delicate dissections at what feels like less distance than if she was physically touching the patient, but without compromising the sterile field. “I almost feel more connected to the patient with this technology,” she says.  Rachel Wallach