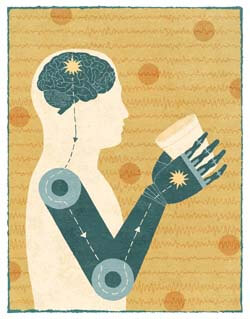 Patients who come to Johns Hopkins for epilepsy surgery sometimes require a prequel to their treatment: a multiday stint in the . There, they fill their time with typical hospital stay activities-eating, sleeping, reading, and watching TV-while electrodes laid on the surfaces of their brain record electrical activity 24 hours a day to help locate the origin of their seizures.

Now, while they wait to get help with their seizures, some of these patients have taken an opportunity to help others. By allowing researchers to use their brain recordings while they perform simple tasks with their own arms or learn to control a robotic one, they're helping to usher in a new era of high-tech prosthetics to aid those who have lost an arm, or arm function, through trauma or disease, says research leader Nathan Crone.

Crone, a neurologist who specializes in treating drug-resistant epilepsy, says he and his colleagues realized years ago that these brain recordings-taken so that he and other doctors can remove the part of the brain causing seizures without harming tissue critical for everyday tasks-could be used for another area of medicine altogether. The electrodes, tiny metal disks embedded in soft plastic sheets laid on the surface of the brain, offer advantages over other methods researchers have previously used for brain control of prosthetic devices. Unlike electrodes that record from the scalp, recordings from within the skull provide far higher fidelity and greater resistance to signal loss.

Crone and his colleagues on the medical campus gather information through these electrodes by detecting the electrical signals that brain cells generate during normal arm movements, speech, and other everyday tasks. Working with colleagues at the Johns Hopkins Applied Physics Laboratory, they also hook up patients' brain recordings to an advanced robotic prosthetic arm and coach them to try to use their brains to guide the arm's motions. The signals gathered during these sessions are run through sophisticated computer algorithms developed in collaboration with colleagues from the Johns Hopkins Department of Biomedical Engineering. The goal is to coordinate the spatial and temporal information from the brain recordings with what the patient's real arm and the prosthetic arm are doing.

Eventually, Crone and his colleagues hope to tweak the algorithms so that the eventual end users of the prosthetic arm will be able to control it smoothly and confidently with their brains. Another goal is to introduce even more functionality into the prosthetic system, adding automatic actions based on visual cues-say, being able to pick up and drink from a coffee cup based on the prosthetic system's recognizing the cup's shape.

But none of these goals, says Crone, would be possible without the generosity of Johns Hopkins' epilepsy surgery patients.

"We've been really touched by how patients are donating their time to this research," he says, "even though it's not going to directly affect them. They see the enormous potential for this, just like we do."