Archives - It's All About Familia

It's All About Familia 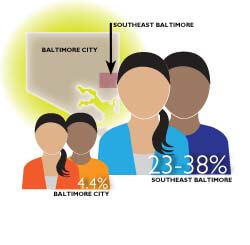 Latinos are the largest and fastest growing ethnic minority in the United States, with a total population of 50.5 million in 2010. Since 2000, the Latino population in Baltimore has grown nearly 2.5 times. In Southeast Baltimore, the area served by Bayview, Latinos are 23 to 38 percent of the population.

When Marlene Aza heard from a friend that the pediatrics clinic at Johns Hopkins Bayview Medical Center had an outlet for Spanish-speaking mothers to meet, offer feedback on the clinic services, and learn about community resources, she wanted in.

Aza called the clinic to inquire, and soon was invited to join the Latino Family Advisory Board, a group of nine to 12 mothers who meet six evenings a year. Thanks to the board’s feedback, the clinic replaced its carpet with easier-to-clean flooring, and obtained educational materials and children’s books for the waiting area. Volunteers now read to children waiting for appointments and help parents fill out paperwork. The clinic also started a monthly parenting class to address issues like behavior management in young children, and developed a dental health toolkit for families.

Aza, who moved to Baltimore nine years ago from Peru, says she loves the group’s supportive nature, that it offers childcare during meetings, and that clinicians listen to her suggestions. Through her participation, she learned about English and exercise classes and also received important information about school for her young sons.

Now, with the establishment of a Center of Excellence for Latino Health at Johns Hopkins Bayview, clinicians hope to embrace many more families like Aza’s.

Known in Spanish as Centro de Johns Hopkins para la Salud y Oportunidad de los Latinos, the center emphasizes a family-centered multidisciplinary approach to health that bridges medicine, pediatrics, gynecology and obstetrics, and psychiatry. It focuses on enhancing the health of Latinos in Baltimore and beyond by combining coordinated clinical care with advocacy, education, and research.

Bayview was the logical place to house the new center, says its director Tina Cheng, because the campus had already established programs such as the family advisory board and an Hispanic community mental health clinic to serve the large Latino population in southeast Baltimore. Not only do Latinos make up roughly a third of the population in the area surrounding Bayview, but more than half of the hospital’s pediatric patients and 45 percent of obstetric patients are Spanish-speaking.

The initiative was made possible by a five-year grant from the Aaron and Lillie Straus Foundation, and matching funds provided by leaders from Bayview, the Johns Hopkins University School of Medicine, and the Johns Hopkins Health System.

Latinos in the Bayview area face a number of health issues, including childhood obesity and diabetes, dental cavities, and access to health care, says Cheng, a professor of pediatrics who studies health disparities in minority populations. There also are significant mental health needs for adolescents trying to fit in, and for adults feeling economic pressures and isolation, especially among those trying to raise money to send to family members left behind in other countries.

But, says Cheng, “they also have areas of positive health behavior and health outcomes that we can learn from, like strong families and good birth outcomes.”

The center represents a culmination of efforts that began in 2010 with the creation of the Hopkins Organization for Latino Awareness, or HOLA, launched by Kathleen Page and Adriana Andrade, both assistant professors of medicine and infectious disease specialists at Hopkins.

HOLA has directed a range of activities, including cultural competency courses for medical students, health seminars at the Bloomberg School of Public Health, and an elective through which trainees in Hopkins’ urban health residency program treat Latino patients at Esperanza Center, a free clinic for immigrants, supervised by HOLA faculty. The new funding allows investigators to strengthen HOLA’s research base, develop interventions to reduce health disparities for Latinos, expand collaborations with other Hopkins and Baltimore City entities, establish a website for community residents, and hire a full-time administrator. Karen Blum