Archives - If the Worst Happens

If the Worst Happens 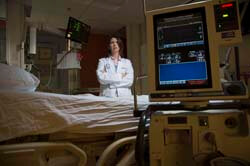 Who gets first claim on ventilators? Biddison at the bedside.

Last November, Taiwanese authorities reported the first-ever human case of a new strain of avian influenza. This new pathogen will probably be contained, as most novel viruses have been recently. But before long, it is all too possible that we will face a genuine viral pandemic, with tens of millions of lives at risk.

If a true pandemic hits, hospitals might find themselves flooded with far more patients than they can handle. In that scenario, which patients should have the first claim on ventilators and other scarce resources? The youngest? The sickest? Or should ventilators be allocated on a simple first-come, first-served basis?

Those worst-case questions have been pondered for years by medical ethicists and emergency planners. But Elizabeth Lee Daugherty Biddison, an assistant professor of medicine and vice chair for clinical operations at Johns Hopkins Medicine, decided to approach the topic differently: Why not ask everyday citizens what they believe, and use those public beliefs to shape hospital protocols? In collaboration with a team of scholars and physicians, Biddison has been leading a series of public meetings in diverse communities across Maryland. She recently spoke with Hopkins Medicine about her project.

How did you first become interested in the problem of pandemic surges and how to allocate scarce medical resources?
Part of it comes from having done medical mission trips with my father, an orthopedist in private practice in Virginia, even before I started medical school—trying to offer care in resource-poor settings, and recognizing that the very limited things that we can do sometimes do make a huge difference.

But in terms of the disaster piece, I really became interested in that as a fellow here at Hopkins. When I came here for my pulmonary and critical care fellowship in 2004, I was introduced to colleagues at the Center for Health Security (then the Center for Biosecurity), which is located here in Baltimore but is actually part of the University of Pittsburgh. After my fellowship, I joined the Office of Emergency Management here to do surge planning for Johns Hopkins Hospital. The million-dollar question that kept coming up was: Well, we plan and plan and plan, but what if what we've done still isn't enough? What do we do then? Our planning is really important, but it will never be perfect, simply because of the unpredictability of disasters.

If there was a pandemic emergency next month and hospitals were overwhelmed, how much latitude would individual hospitals have to set their own triage policies?
It depends on where you are. In some places—New York and Massachusetts are examples—there have been statewide plans established. Other states don't have those, and so hospitals (including those in Maryland) are very much on their own.

How do the public meetings work?
We ask people to devote about five hours to this project. After an introduction, they’re divided into small groups for discussions at tables. We give them a pandemic scenario and a sketch of six possible ethical frameworks. We pose the question: Based on your own values, if ventilators are only available for some of the patients who need them, how should they be allocated? Later in the day, we give them a second, even more difficult question: Would it ever be OK to remove a ventilator from a patient who needs it to survive in order to give the ventilator to another patient who also needs it to survive?

The thing that's most striking is how willing and excited people are to engage in this conversation. We’ve seen that in affluent areas like Howard County, and we’ve seen it here in East Baltimore, at Zion Baptist Church. You realize that folks who may not have the same financial or educational resources are just as willing, eager, and able to engage in challenging ethical questions and are giving really full, meaningful feedback. That’s very exciting, I think.

Which ethical frameworks do the participants lean toward?
It’s too early to say. The meetings aren’t complete, and we haven’t done a full analysis yet. What I can say is that there are proponents and opponents of a whole variety of positions, which highlights the fact that there’s more than one valid way to think about these questions. And whatever principle one chooses, we also need to think carefully about the feasibility of any given triage model. What kinds of information will hospitals realistically be able to collect about patients who are pouring through their doors?

Why did you decide to tap the public’s insights about how to allocate scarce resources during disasters?
The goal of our meetings in Maryland has not necessarily been to reach agreement or consensus but to show that diverse members of the public can deliberate together about these very difficult questions. We hope that these conversations will help inform policy guidelines at Hopkins and for the state of Maryland. The final meeting is scheduled for April 30, and later in 2014 we hope to bring together expert panels to assess what we’ve learned and to suggest steps forward.