Archives - Getting It Straight 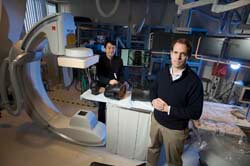 Studies show that roughly half of U.S. spine surgeons will operate on the wrong level at least once in their career, making this the second most common type of wrong site surgery error in the U.S. Surgeons take meticulous care to avoid such errors. Getting it right requires time, diligence, and expertise and presents a burden in the OR.

The main challenge, says Hopkins biomedical engineering professor Jeff Siewerdsen, is that most of the spine’s 33 vertebrae look very similar. “Even an expert surgeon or radiologist can be challenged to confidently identify individual vertebrae in a single X-ray image,” says Siewerdsen. Further difficulties can arise if a patient was born with an extra or missing vertebra, or if their positioning on the operating table obscures the X-ray image.

So Siewerdsen and collaborators have created LevelCheck, a computer algorithm aimed at assisting the surgeon in automatically labeling vertebrae in X-ray images and reducing the frequency of wrong-level surgery. The invention, developed over the last two years at Hopkins in collaboration with Siemens Healthcare, was awarded first place in the diagnostic and imaging category for the 2013 Spine Technology Awards.

How it works: Prior to surgery, the targeted vertebrae are labeled in a CT scan of the patient by the surgeon and/or radiologist. During surgery, the LevelCheck algorithm automatically registers those labels into X-ray images, providing an independent check that the surgeon is targeting the correct vertebral level. In as little as a second, LevelCheck can accurately identify vertebral levels. In addition, the tool “is robust against anatomical changes and the presence of surgical tools in the X-ray image,” Siewerdsen says, adding, “LevelCheck is not a replacement for the surgeon; it’s decision support.”

The LevelCheck algorithm runs on powerful computing hardware—like that used in video games—to quickly register 3D CT and 2D X-ray images.  “The machine we’re using is hundreds of times faster than what was available just a few years ago,” says Yoshito Otake, the Hopkins computer scientist who created the high-speed computing architecture for LevelCheck.