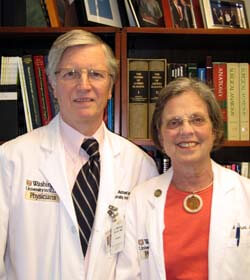 “I really had no idea what academic medicine was all about until I arrived at Hopkins,” says Michael Brunt, pictured here with wife Elizabeth.

Without pause, Michael Brunt ’80 can name quickly the very moment that proved to be the turning point for his future medical career—and really, his life. “It was getting admitted to medical school at Johns Hopkins,” he says simply.

While many School of Medicine alumni might make the same claim, Brunt’s acceptance to Hopkins was nothing short of life changing for this small-town Mississippi native. Having attended the University of Mississippi for his undergraduate degree, Brunt was determined to leave his state at last by applying to medical school. By chance, while on a trip to the East Coast during his senior year of college, he visited hometown friend James Lewis ’76, who was a medical student at Johns Hopkins.

“At that point, I had been accepted to the University of Mississippi and had applications in elsewhere,” he recalls. “But while visiting James, I became enamored of Hopkins, its history and traditions, and it quickly became my top choice.”

Arriving at Hopkins, Brunt soon found a new world unfolding around him that validated his hopes. “I had come to Hopkins with a leaning toward a surgical career,” he notes. “My experience during the surgery rotations during the third and fourth years certainly solidified that. I could see the results of my efforts immediately and really have an impact on patients’ lives.”

The robust academic environment at Hopkins also had a huge and lasting impact on the impressionable student. “I really had no idea what academic medicine was all about until I arrived at Hopkins,” he says.

Today, Brunt continues to relish the experience of balancing his clinical duties with that of teaching new generations of residents. After completing his studies at Johns Hopkins, Brunt finished his residency at the Washington University School of Medicine in St. Louis, Missouri, where he is currently a professor of surgery in the Division of General Surgery. In his clinical practice, his primary specialty is laparoscopic GI surgery. He also is president-elect of the national Society of American Gastrointestinal Endoscopic Surgeons, which has more than 6,000 members.

Brunt’s desire to give back to Hopkins has been brewing ever since his graduation from the medical school.  “If it hadn’t been for the willingness of this great institution to take a chance on an unknown kid from small-town Mississippi, I wouldn’t be where I am today,” he affirms.  “Everything I’ve subsequently done in my career has stemmed directly from my experience at Hopkins.”

He also points to the financial aid he had received as essential. “I would not have been able to afford Hopkins had there not been a financial aid package to help defray some of the costs,” he says.

Now, some 30 years later, he is fulfilling a promise to support future generations of physicians. In 2011, feeling that he was able to “kick off a gift,” Brunt discussed that matter with his wife, Elizabeth, who also is a physician and the section chief of Liver and GI pathology at Washington University. “When I brought up this idea to her, she was all for it,” he says.

Following detailed conversations with development officers at the School of Medicine, the Brunts made their initial gift to establish the L. Michael and Elizabeth Brunt Endowed Scholarship Fund in September 2013. The new Fund will benefit students in need of financial support, with preference to those from Mississippi and Missouri.

“Instead of waiting to give this money to Hopkins through our estate, we wanted the satisfaction of building this scholarship now—and watching it grow to provide even greater tuition support for Hopkins medical students,” says Brunt. “Realizing how much student debt there is now, I want there to be opportunities like I had for students who may not have the financial means to attend a phenomenal place like Johns Hopkins.”

But Brunt’s hopes extend even further. “I would love nothing more than if our scholarship would motivate others—my former classmates and current colleagues—to think about what they can do to take that step and give a little more,” he says.

To learn more about the ways you can endow a scholarshipat the Johns Hopkins School of Medicine, please contact the School of Medicine Development and Alumni Relations Office at 410-361-6561 or jhmalumni@jhmi.edu, or visit www.hopkinsmedicine.org/som/alumni/support/funding.html.