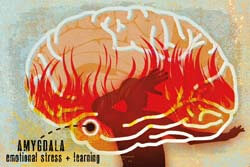 Memories can be one of life’s greatest joys, but for some people who have gone through devastating trauma, a single memory can blight an otherwise happy life and keep them from moving forward. If only there were a way to erase those fearful memories, or simply “unlearn” to be afraid. Though that’s the goal of countless programs aimed at treating post-traumatic stress disorder (PTSD), this condition is often intractable despite years of therapy, with patients relapsing after triggers as simple as the sound of a car backfiring.

However, new research led by Hopkins neuroscientist Richard Huganir shows that forgetting fear is indeed possible and has already been achieved many times—at least, in mice.

Huganir, who directs the Solomon H. Snyder Department of Neuroscience, discovered the ability to unlearn fear while studying its flip side, how mice encode and retain scary memories. His lab has long focused on learning and memory in general—a passion for Huganir since at least high school, where some of his earliest experiments were bent on learning more about memory making in goldfish. More recently, his lab has taken on the task of better understanding the basis of fearful memories, such as the deeply ingrained recollections many Americans have of 9/11.

Huganir and his postdoctoral fellow Roger Clem created fearful memories in their mice by playing an audible tone, then delivering a brief, mild electric shock to the animals’ feet. Within a day, mice froze in fear after hearing the tone to prepare for the shock, regardless of whether it came or not. Searching for the mechanism behind how this fear became wired into the rodents’ brains, Huganir and Clem looked at connections between nerve cells in a part of the brain called the amygdala, often referred to as the brain’s “fear center.”

As in other types of memories, brain cells cement what they’ve recently picked up by changing the strength of their connections to other brain cells at junctions called synapses. Huganir and Clem saw evidence of this strengthening by the presence of familiar receptors for brain chemicals newly present on cell surfaces in the amygdala. But they also saw something completely unexpected: About 24 to 48 hours after mice learned to fear the tone, the researchers detected another, unexpected receptor in amygdala synapses, a rare type called calcium-permeable AMPA receptors. In an even more surprising twist, these new receptors were unstable and short-lived, disappearing within a week of their arrival.

Through tinkering with their mouse model, the researchers eventually realized that the unusual receptors played an important role in fortifying fearful memories. Once the calcium-permeable AMPA receptors completed their usual weeklong stay, the rodents’ fearful memories of the tone seemed fully ingrained. But if the researchers knocked them off prematurely—a feat achievable by activating a different receptor called mGluR1—the animals forgot to be afraid.

Replicating this scenario in human brains would only work for PTSD if patients were treated quickly. “We’d have to treat PTSD like we do for stroke patients, within hours or days after trauma,” Huganir explains. Luckily, some of his newest research suggests that the window for unlearning fear could be extended, perhaps indefinitely. He and Clem have learned that when their fearful mice heard the same tone again weeks after their initial conditioning, the same unusual receptor type reappeared, offering another chance to knock them off and erase fear.

Huganir and his colleagues are currently working with Hopkins’ Brain Science Institute (BSi) to find drugs that could facilitate this process in people, perhaps to eventually enhance the behavioral therapy already used for PTSD to prevent relapse. The original gift from an anonymous donor that launched the BSi in 2007 continues to make research including Huganir’s possible. Christen Brownlee