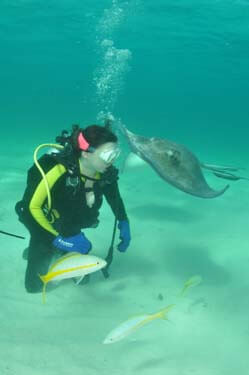 “When I’m underwater and out of my chair … I’m transformed into another being, flying and independent,” says Cody Unser.

Cody Unser hasn’t walked since the age of 12, when a severe case of transverse myelitis left her paralyzed from the waist down. But the avid athlete and scuba enthusiast, today 26 years old, stayed active and discovered new sensations in her body every time she dove. Her excitement was contagious.

“I’ve been Cody’s doctor since she was 13, and for years she told me about the sensations,” says Adam Kaplin, Hopkins professor of psychiatry and neurology. “I spoke to other divers with paraplegia and they, too, were experiencing them.”

So in the summer of 2011, Kaplin and Hopkins collaborator Daniel Becker, director of the International Neurorehabilitation Institute, conducted a pilot study in the pristine waters of Grand Cayman Island. The study, which involved Unser and 10 paralyzed veterans, is the subject of a one-hour documentary, Sea of Change, which was released last fall.

Unser, the daughter of race car driver Al Unser Jr., leads the non-profit Cody Unser First Step Foundation (CUFST), which, among other projects, teaches the disabled to dive. CUFST provided funding for the pilot study, which examined both the neurological and psychological effects of scuba diving on veterans with spinal cord injuries.

Tests were given before and after dives, which reached an average depth of 60 feet, and the study included 10 able-bodied divers in a control group (most of whom were scuba instructors).

“We tested sensation in detail from light touch to pinprick to sharp touch,” says Becker, who, along with Kaplin, had to learn to dive for the project. “Motor skills were tested to see if there was any improvement in muscle strength. We also tested for spasticity, since those with spinal cord injuries have a significant stiffness that gets in the way of their functioning.

Kaplin handled the psychological testing, meant to measure the impact of diving on post-traumatic stress syndrome (PTSD), a significant problem among many war veterans.

The findings, says Becker, were extremely promising. The researchers found that diving to depth led to improvements in muscle movement, touch sensitivity, and PTSD symptoms in the divers with spinal cord injuries.

“The concept is that somehow you can actually restore sensory and motor function as well as have dramatic psychological benefits to patients when they're scuba diving,” says Kaplin, adding, “If these results repeat themselves, this is an unprecedented finding that something is happening.”

Pressure on the body at depth is nearly triple that on the surface, causing nitrogen to build up in the bloodstream. Accordingly, the scientists’ research indicates that as nitrogen accumulated in the divers’ tissues, it created and increased levels of serotonin. In theory, this might jump-start nerves in the spine without input from the brain. As a result of diving, the nervous system could be prompted to seek new connections between muscles and functions.

In continuing studies, the Hopkins researchers want to see if certain drugs such as serotonin reuptake inhibitors (i.e., Lexapro, Zoloft) might actually lead to an improvement in the gait of people with spinal cord injuries. The scientists’ experiments will involve the use of a pump to deliver higher doses of serotonin directly to the spinal cord of lab rats to see if it makes a difference. Kaplin and Becker also plan to look further into hyperbaric oxygen chamber treatment.

With funds raised from Sea of Change (produced by Chris Schueler and narrated by Montel Williams) and a $25,000 grant from Newman’s Own Foundation, there’s hope for a follow-up to the pilot diving study, Kaplin says.

Cody Unser remains optimistic. “When I’m underwater and out of my chair, it’s like being in another world,” she says. “I’m transformed into another being, flying and independent. It’s rewarding to be part of something so powerful and healing. I would love to walk again and feel my feet in the sand.” Ellsworth Boyd