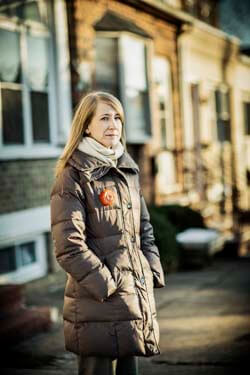 For generations, medical residency programs in the United States have overwhelmingly centered on acute care in hospital settings. After three years of 80-hour weeks, medical trainees often know exactly how to remove an appendix, place a chest tube, heal a broken bone, and select a chemotherapy regimen. What they often lack, however, are the skills at the core of the emerging paradigm for health care for an aging population: managing medications in home settings, preventing complications, and keeping patients out of the hospital in the first place.

A new effort at Johns Hopkins Medicine aims to change that dynamic. Beginning in the fall of 2013, every new internal medicine resident at Johns Hopkins has been assigned to work with at least one patient enrolled in a program known as the Johns Hopkins Community Health Partnership, or J-CHiP. The JCHiP program, which has been financed through a $19.9 million federal grant, seeks to improve the coordination of care for thousands of low-income patients who live in seven zip codes surrounding the Johns Hopkins medical campus.

The mantra of the JCHiP program is meeting people where they are, both literally and figuratively. The patients receive regular home visits and phone calls from doctors, nurses, and community health workers. These teams of health professionals are trained to think holistically about the patients' needs and about social and financial barriers that prevent them from achieving good health.

For Hopkins medical residents, JCHiP provides skills and experiences that most medical trainees would never taste. "Working alongside a community health worker-that's an entirely new entity for most of us," says Stephanie Nothelle, a third-year internal medicine resident at Hopkins Bayview Medical Center. "And going on home visits has also been extremely productive and eye-opening." Spending time in the home, Nothelle says, opens up new levels of communication, and also gives the health team a much deeper understanding of the context of each patient's health challenges.

"This is a unique opportunity for residents," says Roy Ziegelstein, vice dean for education at the School of Medicine. "Hopkins as an organization is leading the way in this kind of coordination of care. My strong sense is that this will be the way of the future for academic medical centers across the country, but right now we're on the cutting edge."

At Bayview, a central ritual of the JCHiP program happens every Thursday, when the residents sit down for a lunch meeting with other professionals on the JCHiP team: a health behavior specialist, a community health worker, and a registered nurse who acts as case manager.

On one recent Thursday, the team discussed a half dozen patients with complex challenges such as diabetes, liver failure, and psychiatric illness. Some of the conversations focused on raw financial need: One patient was having trouble affording the anti-nausea medication that was most effective for him; another had been dangerously reusing insulin needles because her insurance company had denied approval for a larger supply. Some patients are almost impossible to contact when their cellphone contracts are suspended. The team members shared strategies for patching those problems before they blew up into full-blown medical crises that would require hospitalization.

At other points, the conversation turned to strategies for helping patients change their behavior. If a patient is motivated to lose weight or to keep her blood glucose under better control, how can the team help her achieve those goals? "Our work is driven by what the patient wants to change," says George Baltz, a health behavior specialist on the JCHiP staff. "If the patient is a substance abuser but wants to work on sleep management-that's what we'll work on."

Most of all, these meetings are designed for exchanging ideas about how to keep patients healthy and out of the hospital. The hope: Better coordination can improve the patients' well-being, and also reduce the costs of their care. (The federal government estimates that patients with multiple chronic conditions account for 66 percent of U.S. health spending.)

At this meeting, Shirley Smith, a registered nurse who serves as a JCHiP case manager, asks for suggestions about how to assist one particular patient as the weather gets colder. "The wintertime is tough," she says. "That's when she tends to be admitted more often for chest pains and asthma." The group tosses around potential interventions: Should they contact the patient more often by phone? Visit her at home to review her medications? Bring her in for more frequent outpatient visits?

This kind of conversation rarely occurs in typical residency programs. Even when residents do rotations in outpatient settings, they are typically trained to respond to whatever challenges fly at them in the clinic. There is little time or incentive for them to coordinate with other health care providers or to spend much time thinking about the patient's home situation.

"When I practiced outpatient medicine as a resident 10 years ago, it was very much a one-on-one interaction," says Laura Hanyok, an assistant professor of medicine who helps guide residents in the JCHiP program. "It was me and my patient. Occasionally I'd bring in specialists who I knew could be of help, but there was never an opportunity to sit in the same room with a large team and discuss a challenging patient. What we want to do with JCHiP is to give residents skills in participating in and leading teams."

Bayview medical residents had been engaged in similar work even before the Hopkins-wide JCHiP program launched in early 2013. Back in 2011, two residents, Marc Larochelle and Melissa Dattalo, led creation of the Bayview Patient Connection, inspired by a celebrated program in Camden, New Jersey, that has improved care and reduced costs by providing intensive coordinated services for Medicaid recipients with multiple chronic conditions.

"Marc and Melissa thought, Wouldn't it be fantastic if we could mirror some of what they've done in Camden?" says Nothelle, one of the few residents remaining from the original project. (Larochelle, Dattalo, and the other founders have moved on to fellowships across the country.) The project identified Medicaid patients who had had more than three hospital admissions or emergency department visits within the previous year, and paired them with residents and a case manager.

"I thought the project was fantastic," Nothelle says. Her first home visit was with a patient who had been frequently in and out of the hospital. "I saw what a huge difference it made to have better coordination in place," she says. "Making a home visit helped to build trust. Every time I saw this patient, he would bring that up. He'd say, 'You're such a great doctor. You came to my house.'"

By late 2012, Hopkins had secured its federal grant to create the JCHiP program, allowing the Bayview Patient Connection's mission to continue on a far larger scale. By 2015, Hopkins officials hope that the JCHiP program will have enrolled more than 50,000 patients.

"I think we've achieved a high level of communication within these [patient care] teams," Hanyok says. "We do whatever it takes to make sure that the entire team is aware of what the patient needs."

Ten years from now, Nothelle hopes to be working with elderly patients in a primary care clinic. "This project has really opened my eyes to a passion that I didn't know that I had, which is health systems reform," Nothelle says.