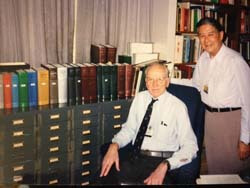 Despite birthplaces and medical institutions that were half a world apart, Wilson H. Lo ’51, a native of Jiujiang County, China, and Maine-born Victor A. McKusick ’46, shared an enduring friendship and indelible professional bond. They each became known as the “Father of Medical Genetics” in their respective nations and profoundly influenced the development of what promises to be among the most powerful forces in 21st-century medicine.

Lo, who died in Beijing on Sept. 9, 2013, at the age of 90, became a protégé of McKusick’s while completing his internship and residency at Hopkins from 1951 to 1954, when McKusick was the chief resident in internal medicine.

Lo returned to China in 1955 to join the faculty of the Peking Union Medical College (PUMC), founded in 1906 and then completely reorganized along Hopkins lines between 1915 and 1921.  He rose through its ranks and kept in close touch with McKusick, who in 1957 founded Hopkins’ Division of Medical Genetics. In 1963, Lo followed his mentor’s example and established the first medical genetics unit in China at PUMC.

Lo fell victim to Mao Zedong’s decade-long Cultural Revolution, launched in 1966, and was exiled to northwest China, where he practiced medicine in a local occupational health hospital from 1970 to 1973. He returned to Beijing but was sent to work in a cancer hospital for five years. He finally returned to PUMC in 1978. There he established the Department of Medical Genetics at the Institute of Basic Medicine Science in the Chinese Academy of Medical Science, and in 1980 became the inaugural director of PUMC’s first genetics clinic.

In 1987, Lo was appointed the first director of the Beijing National Medical Genetics Center at PUMC. Despite officially retiring in 1989, Lo returned to Hopkins as a visiting professor in 1999 and spent a year learning from McKusick how to use the online version of his classic Medelian Inheritance in Man. Earlier, Lo supervised translation of the 11th edition of the printed version of it into Chinese.  NAG