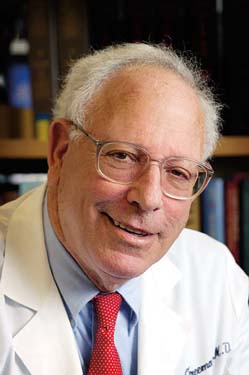 Freeman’s forceful advocacy of two long-abandoned therapies—the ketogenic diet, requiring a strict high-fat, low-carbohydrate regimen; the other involving surgery to remove half of the brain of children tormented by unremitting seizures—revolutionized the treatment of pediatric epilepsy by fostering the revival and current acceptance of these methods as effective treatments.

An outspoken advocate of patient rights throughout his career, Freeman also wrote extensively on the ethical and medical conundrums surrounding the treatment of severely ill newborns with congenital defects.

Freeman, founding head of Hopkins’ Division of Pediatric Neurology and the Birth Defects Clinic, as well as director of what now is the John M. Freeman Pediatric Epilepsy Center and an emeritus professor since 2007, died on January 3 of cardiovascular disease. He was 80.

In the early 1990s, Freeman began reviving the use of the long-ignored ketogenic diet (KD) for the treatment of childhood epilepsy. Initially developed in the 1920s, it was largely abandoned once chemical anti-seizure medications were formulated in the 1930s.  As recently as 1995, many physicians considered KD no longer a viable treatment. Freeman’s “resurrection” of KD, which completely ended the epileptic seizures of many patients, was accomplished “virtually all by himself, against great skepticism and opposition,” according to neurologist and neuroscientist Guy M. McKhann, founding head of Hopkins’ Department of Neurology. Today, KD is a mainstream medical treatment, with centers offering it in more than 45 countries worldwide. New studies indicate it may also be an effective treatment for autism, brain tumors, Alzheimer’s disease, and diabetes.

Freeman also was a mentor to Hopkins’ famed pediatric neurosurgeon Benjamin S. Carson, encouraging him to revive the long-abandoned use of hemispherectomies, or the removal of half of the brain, to curtail the crippling seizures suffered by young patients whose cases they shared.

Freeman was the founding chairman of the Johns Hopkins Hospital Ethics Committee and co-director of an undergraduate medical student course in bioethics. He was a member of the original faculty of the Johns Hopkins Berman Institute of Bioethics, and along with his wife, Elaine K. Freeman, Hopkins Medicine’s former vice president of corporate communications, he established the Freeman Family Fund in Clinical Bioethics to help support faculty for that subject.  NAG