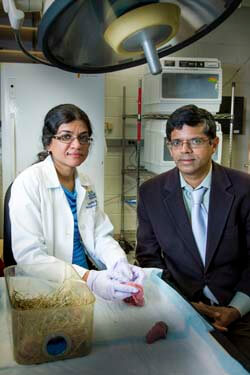 Sujatha Kannan (left) and Kannan Rangaramanujam, in the lab with their “rescued’ rabbit kits.

The human body has many natural barriers intended to prevent microorganisms, diseases, and toxins from making it into the body. The mucus membranes of the respiratory, gastrointestinal, and female reproductive tracts, for instance, trap bacteria, viruses, and other particles and flush them out of the body. Then there is the formidable blood-brain barrier, which allows the important give-and-take of key signaling molecules, nutrients, and waste products between blood and brain, but prevents the efficient penetration of large molecules, bacteria, and viruses.

Unfortunately, sometimes these barriers prove too effective, especially where medicine is concerned. While they protect the body, they also prevent drugs and therapeutic gene-bearing particles from reaching their intended targets.

In recent years, a new field that blends the can-do pragmatism of engineering and the therapeutic magic of medicine has sought to tackle these challenges by packaging existing medicines in new ways to deliver drugs to places in the body that were once out of reach. It works at the smallest scales of matter where a hundred nanometers-a distance smaller than the wavelength of light-can mean the difference between a drug that reaches a malignant tumor and one that does not. The field is known as nanomedicine.

"We're not making new drugs. We're making existing drugs better by engineering ways to package them differently at the nanoscale-molecule by molecule-to help them transcend the body's natural barriers," says Justin Hanes, who directs the Johns Hopkins Center for Nanomedicine. Hanes is the Lewis J. Ort Professor of Ophthalmology at the Wilmer Eye Institute and a chemical engineer by training.

Researchers from across Hopkins Medicine are using nanomedicine in fields ranging from oncology and ophthalmology to sexually transmitted diseases.

In oncology, Hanes and others are working to develop better drug delivery technologies that allow oncologists to be far more accurate in their application of the powerful chemical toxins meant to kill cancerous cells, but which also ravage healthy tissue. He notes that as little as 1 percent of current chemotherapy drugs actually reach the tumors they are intended to destroy, while the remaining 99 percent kill healthy cells and tissues in other parts of the body.

"It's the equivalent of poisoning a garden to kill a single weed," Hanes says. "Nanomedicine could make it possible to get more drug to the tumor where it is needed and less to healthy tissues where it is not."

In ophthalmology, Hanes is working with Wilmer colleagues to fight numerous diseases that cause blindness, including the wet type of age-related macular degeneration, a leading cause of blindness in American adults. The disease is known as "wet" because abnormal blood vessels form behind the retina where they leak fluid and damage the macula, the region of the eye responsible for seeing fine detail. If left untreated, scar tissue forms under the retina, causing a rapid loss of vision.

There are drugs that can impede the growth of these blood vessels and slow the rate of fluid leakage, but the price for the patient is steep: needle injections directly into the eye every four to eight weeks. So far, less invasive eye drops and pills have not proved viable because too little of the drug makes it to the site of disease to be effective.

Hanes and his Wilmer colleague Peter Campochiaro published a paper in October 2013 in the Journal of Controlled Release in which they successfully married individual anti-angiogenesis drug molecules within a biodegradable plastic. As the plastic slowly dissolves, the active drug is freed bit by bit. In effect, the researchers have created a time-release mechanism that allows the drug to remain in the eye much longer than the drug alone could.

In the short term, it could mean injections that are fewer and farther between. In the long term, Hanes can foresee nanotechnology-enabled eye drops or pills that may reduce injection frequency even further and, perhaps, even prevent progression of the disease to the wet form.

"If we can do that," Hanes says, "then we open the door to effective methods to not only treat devastating diseases like this but to actually prevent them from occurring in the first place."

Though the Center for Nanomedicine is part of the Wilmer Eye Institute, the research is by no means restricted solely to the eye. Researchers at the center are actively working in many therapeutic directions including neurological disorders. One of the most promising is a post-natal treatment for cerebral palsy. According to the Centers for Disease Control, cerebral palsy is the most common motor disability in childhood, with symptoms ranging from imbalance to severe motor impairment requiring lifelong care.

The husband-wife team of Kannan Rangaramanujam, a professor of ophthalmology, and Sujatha Kannan, an associate professor of anesthesiology and critical care medicine, is using nanomedicine to "rescue" rabbit babies-known as kits-that suffer from cerebral palsy.

Hanes notes that video taken of the kits "is pretty dramatic."

"The untreated kits are essentially inactive and unable to move with normal balance and coordination, while the treated kits appear near normal, hopping and walking around," he says.

In the Kannans' model, cerebral palsy is induced by maternal inflammation, a common cause of the disease in humans. This leads to fetal neuroinflammation, caused by activated microglia and astrocytes, which normally provide immune defense in healthy brains. When inflamed, however, these cells go rogue-causing significant collateral damage in the brain.

The anti-inflammatory drug NAC is believed to be effective against such inflammation, but it has trouble penetrating deep into the tissues to target cells in the brain, and thus has not been effective in treating cerebral palsy, even at large doses.

Nanomedicine can modify existing drugs like NAC and deliver them to target cells in a Trojan horse manner. The Kannans have shown that attaching NAC to small, tree-like polymers called dendrimers can help NAC make it across the blood-brain barrier and into inflamed tissues and cells. In an ironic twist, they believe that the same inflammation that causes cerebral palsy also weakens the blood-brain barrier, allowing for the increased uptake of dendrimers.

"This enhanced permeability of the blood-brain barrier may also allow free-form NAC into the brain, too, but the drug is distributed non-specifically, and doesn't efficiently enter the target cells. We believe that packaging NAC in dendrimers helps it move nicely through the brain," says Kannan Rangaramanujam.

The duo showed that a single dose of their dendrimer-based NAC can relieve neuroinflammation and lead to significant improvements in motor function in treated kits, even more than those receiving an order of magnitude higher concentration of dendrimer-free NAC, which showed no effect. The work was published in 2012 in the journal Science Translational Medicine.

"This suggests a new window of opportunity has been opened for the treatment of cerebral palsy in humans and, perhaps someday, the possibility of preventing cerebral palsy altogether," Kannan says. He notes also that similar inflammation has been implicated in diseases ranging from autism to multiple sclerosis, holding the hope of treating those diseases as well.

Nanomedicine is also making an impact on sexually transmitted diseases, including the prevention of HIV, herpes, and bacterial infections in women.

"Sexually transmitted infections are a major problem in both developed and developing countries. Women are disproportionately infected with HIV during heterosexual intercourse, for instance, and an easy and discreet female-controlled microbicide could halt millions of infections worldwide," says Hanes. "But the mucus barrier is a challenge."

The vagina's surface has numerous folds known as rugae, which are coated by a protective layer of mucus. The mucus layer proves a formidable barrier not only to disease but also to drugs that prolong preventive drug activity. Too few of today's drugs and antimicrobials can both penetrate the mucus and have a lasting effect on disease, Hanes says.

In a paper published in 2012 in Science Translational Medicine, Hanes and a team of researchers reported creating mucus-penetrating nanoparticles that can make it into crevices of the rugae and remain active for sustained periods of time. The drugs were coated with a slippery polymer that avoids sticking to mucus. These particles provide deep and complete coverage of the rugae in just 10 minutes.

"Our mucus-penetrating particles were more effective against herpes infection than existing drugs, even when the existing drugs were used in 10-times higher concentration," Hanes says. "This bodes well for the future of nanomedicine in safe and effective drug delivery systems for mucosal tissues, like the vagina, lung airways, and gastrointestinal tract."

Kannan sees a special atmosphere evolving in nanomedicine at Johns Hopkins. It is a place where biomedical engineers like him and Hanes can explore common aspects across many diseases and apply their problem-solving skills while they work with top experts in the specific diseases they are trying to treat.

"It's just a very collaborative place to work on some very big problems," he says.