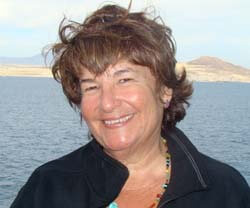 It is a well-known precept in academic medicine that when graduate students perform research under the guidance of senior faculty, their names may appear first on any resulting paper but the head of the lab gets the credit for what the team has done together.

In 1978, Candace D. B. Pert ’74 had a problem with that. Six years earlier, as a pharmacology graduate student and member of the research team in the Hopkins lab of neuroscience pioneer Solomon H. Snyder, Pert helped uncover the opiate receptors in the brain by using a unique radioactive tagged drug process that revealed how these chemical messengers enable brain cells to “talk” to one another and determine every brain-controlled process (from thinking and breathing to mental illness and even love).

It was an epochal discovery that earned Snyder the 1978 Albert Lasker Basic Medical Research Award. That award prompted Pert, by then a researcher at the National Institute of Mental Health (NIMH), to write a protest letter to the Lasker Foundation, arguing that she had “played a key role in initiating the research and following it up,” and saying that she was “angry and upset to be excluded” from the Lasker’s recognition.

Pert’s letter caused an uproar in the scientific community, with some observers contending that it demonstrated the difficult time women had advancing through the academic medicine hierarchy. Years later, Pert told the Denver Post that she had been “naïve” and “stepped too far over the line” in sending her letter to the Lasker Foundation—and by the end of her life, she and Snyder were on excellent terms. After Pert, 67, died on Sept. 12 of cardiac arrest in her Potomac, Md., home, Snyder told The Washington Post that she was “one of the most creative, innovative graduate students I had ever mentored.” He spoke at her memorial service.

At the NIMH, Pert conducted landmark research on neuropeptides, which are chemicals the brain uses for communication, receiving the 1978 Arthur S. Flemming Award for exceptional service by a government employee. In 1982 she was named the NIMH’s section chief for brain biochemistry. She led the research team that discovered peptide T, a chemical believed to have the potential for blocking the HIV virus.

In 1987, she and her husband, pharmacologist Michael R. Ruff (A&S ’75), co-founded the Germantown, Md.-based company Peptide Design to continue research on peptide T and its impact on HIV/AIDS and other diseases. She also spent more than a decade as a research professor at Georgetown University. In 2007, she and Ruff co-founded another firm, Rapid Pharmaceuticals of Rockville, Md., to devise experimental treatments for AIDS, autism, Alzheimer’s disease, and pain management.

Pert, who became a strong advocate of alternative medicine methods, also wrote a popular 1997 book, Molecules of Emotion: The Science Behind Mind-Body Medicine, urging a holistic approach to health care.  Neil A. Grauer