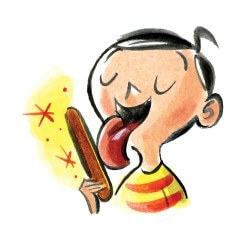 Brain Trust:As the first physician-in-chief of Johns Hopkins Hospital, William Osler changed the course of modern medicine. But what was the source of his genius? As he lay dying from pneumonia in 1919, he directed that his brain be sent to the Wistar Institute in Philadelphia, where anatomical studies were made of the brains of prominent individuals to see what might have distinguished them from others. An examination in 1927 didn’t reveal much—but Osler’s brain is still there.

Say Ahhh … and Mmmm! In the 1920s, The Johns Hopkins Hospital’s carpentry shop used cherry wood to make tongue depressors because the physicians thought they would taste better.

All in the Name of Science: Frederick Henry Baetjer (class of 1901), Hopkins Hospital’s first chief radiologist, was so devoted to exploring radiology that he overexposed himself to radiation before its inherent dangers were fully understood. It cost him all of his fingers and one eye—but The New York Times reported in 1926 that he planned to “continue his work as long as he lives, fingers or no fingers.”

Beer Baron: During Prohibition, Max Broedel kept his buddies—including Baltimore newspaperman H.L. Mencken—supplied with great beer. Starting with some beer yeast that Mencken had obtained in New York, the founding director of the Department of Art as Applied to Medicine grew and perfected it in the Hopkins bacteriological laboratory, creating a pure strain that produced a delicious brew during the Prohibition drought.

Pearly Whites: In addition to formulating medicines during the 1930s, Hopkins Hospital pharmacists made all of the toothpaste used in the Hospital, producing some 25 pounds of it a week.

Jokester: Adolf Meyer, director of the Phipps Psychiatric Clinic from 1912 to 1941, enjoyed practical jokes. At dinners that he and his wife hosted at their home for first-year students, a large, dome-covered silver platter would be brought to the table. Meyer would ceremoniously lift the lid—revealing a flustered, live turkey.

Batter Up! Neurosurgeon Walter Dandy didn’t spend all his time in the operating room. Asked by Brooklyn Dodgers president Larry MacPhail to create batting headgear that would look like a normal cap yet protect players from getting beaned, he set to work with Hopkins orthopedic surgeon George Bennett. The result of their labors: a cap that had zippered pockets on each side into which curved, plastic protective shields could be inserted. It was first used in 1941.

Hat Trick: Before the advent of smart phones and email, Thomas B. Turner (School of Medicine Dean, 1957-1968) had a unique way of managing his schedule. A gentleman of the old school, Turner wore a hat every day—a homburg in the winter, a straw hat in the summer. So he and his executive assistant, Claudia Ewell, communicated by hatband. Before she left every evening, she would leave an index card in Turner’s hat, providing him with information about his schedule for the evening and what he had to do first thing the following morning.

Seeing Red: It was not until 1977 that The Johns Hopkins Hospital, which opened in 1889, at last got out of the red. Due to its commitment to Johns Hopkins’ mandate to care for those who couldn’t pay, the Hospital operated at a loss throughout its first eight decades. Annual deficits were covered by gifts from trustees and dipping into the endowment. When Robert Heyssel became head of the Hospital in 1972, it was running a $1.2 million deficit. To help raise the $100 million needed to upgrade Hopkins, Heyssel persuaded the state’s Health Services Cost Review Commission to allow higher fees for those who could pay, improved the Hospital’s efficiency, and cut costs wherever he could. By 1977, the Hospital was making money.

Hill With a View: Mr. Johns Hopkins originally wanted his hospital to be built on the grounds of his 330-acre estate, Clifton, in northeast Baltimore City. He later was persuaded to purchase new land in the city for the hospital, a 13-acre site at the crown of what was then called Loudenslager’s Hill (named for a prominent butcher and innkeeper, Jacob Loudenslager). Hopkins paid $150,000 for the site. It is where the original Johns Hopkins Hospital was built—and where the soon-to-be-opened new Hopkins clinical towers now stand. *