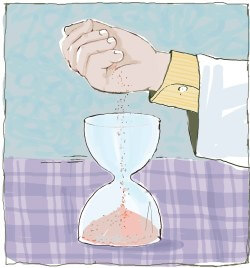 By most measures, eight years is a long time. It permits transition from diapers to sleep-away summer camp, from awkward middle school slow dances to a college diploma, and from that first day on the wards as a medical student to the final chapters of cardiology fellowship.

Though lessons come packaged rather differently in each of those three phases, the learning curve is similarly steep throughout.

I readily admit to getting a kick out of being called “doctor” at the end of medical school. It was nonetheless evident, at least to me, that my actual readiness to care for the sick lagged substantially behind the social statement of trust in my abilities conferred by the roll of stiff paper bearing a seal and illegible signatures. Confirmation of the canyon separating my competence from my professional title came most dramatically on July 1, 2005, the first day of medical internship. It was also a day that, in defiance of the Earth’s 24-hour spin cycle, managed to last for 30 hours.

In the years since medical school graduation and that first call night of internship, that canyon has become smaller. Earning the right to be called “doctor” by others was a distinct event in time. Earning the feeling of deserving the title and its responsibilities has been a process. I cannot pinpoint a specific moment in training, through residency, chief residency, or fellowship, when I crossed a critical threshold and suddenly felt full comfort with the title.

I’ve written for this magazine for eight years, from a first story about watching a patient die to a most recent story about how we decide to help patients live or die.

I reflexively wince at the sound of my voice on tape. The same occurs when I read my own writing. So it was with an odd blend of curiosity and caution that I sat down to read my words from eight years ago. In the piece (“The Death of Mr. G”), I recount the details of a forever-formative Wednesday afternoon. I describe the sadness and inspiration of a family’s bond as I, together with my classmate Brian and our preceptor Dr. Phil Buescher, witness the death of a 58-year-old father of five.

I’ll admit to a few winces as I read, mostly in reaction to my amateur attempts at medical description, disguised in what at the time amounted to borrowed clinical terminology. But to my surprise, I was otherwise relieved that, eight years later, I was still able to relate to the catalog of emotions conveyed: my sadness at having a front row seat to a family’s unfiltered grief, my selfish but instinctive appreciation for my family’s health, and my admiration for the example and guidance of Dr. Buescher.

Dr. B played two pivotal roles on that day. My telling at the time describes only one of those roles: the deft skill and rich humanity with which Dr. B shepherded Mr. G’s family through the death of their father.

The second of Dr. B’s roles was that of teacher. As in much of medical training, Brian and I learned that day by watching. But after Mr. G’s family walked out of the ICU and into the rest of their lives without dad, Dr. B did not dismiss us, nor did he casually move on to the next task at hand. He instead sat us down. In a manner neither preachy nor all-knowing, he quietly said, “People will always appreciate when you give them two things: your time, and a sense that you care about them. Sometimes we have nothing else to offer. But in any situation, you can always offer those two things.” His voice cracked and he quickly cleared his throat in an entirely failed effort to mask his own emotions.

What strikes me now about that moment was how lucky I was to experience it with Dr. B. He was much further into his career at the time than I am even now. Despite the unrelenting institutional and system-wide pressures to see more patients, generate more billing, and treat our collective calling like a business enterprise, Dr. B had the sense to share his humanity with a family in need and with his impressionable students.

Thus, Dr. B’s example on that fateful Wednesday evening is both behind me and in front of me. In the eight years since Mr. G’s death, Dr. B has remained a source of guidance, wisdom, humor, and mentorship for me. I imagine anyone who has gone through medical training can offer their own stories of teachers who have made and continue to make a difference in their development. Dr. B’s lessons are not neatly packaged as such, but rather take on an unspoken form: the routine display of his method and manner with patients and with the everyday challenges of clinical medicine.

Maybe the title of “doctor” is never earned with crisp finality. Maybe there is no distinct professional arrival. Maybe it is earned and re-earned with each day, with each family, and with the prioritized provision of the best medicine in our bag and of those two elements that Dr. B described to me and Brian in that windowless ICU conference room eight years ago: time and humanity. *