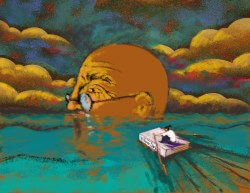 In the early 2000s, Jodi McLaughlin began to notice odd changes in her father’s behavior. A mechanic, he suddenly could no longer fix the furnace he’d worked on for years, leaving it unrepaired in the dead of winter. He forgot the way to places he’d driven all his life, and needed his wife along to navigate. In 2006, McLaughlin’s mother had a stroke, and when her father didn’t realize it, she lay in bed for two days until McLaughlin found her.

Months later, after her mother died, McLaughlin attended a grief workshop for caregivers. There, someone mentioned a book called The 36-Hour Day: A Family Guide to Caring for People Who Have Alzheimer Disease, Related Dementias, and Memory Loss by Nancy L. Mace and Peter V. Rabins. Meanwhile, McLaughlin’s father had been diagnosed with probable Alzheimer disease. McLaughlin bought a copy. For her, the book has been a lifeline.

“I’m glad it was the first book I read when I needed to get an education,” she says. “It covers so many aspects of the disease.” Medical aspects, such as depth and peripheral vision loss. Safety aspects, such as the need to pre-plate and label meals so her father wouldn’t eat spoiled food. Emotional aspects, such as how to avoid triggering his anxiety. And just as important, the book also addresses her needs as a caregiver.

Last fall, 30 years after the first edition of The 36-Hour Day came out in 1981, the Johns Hopkins University Press published the fifth edition. The book, largely credited with spurring growth of the Press’ list of consumer health books, which now account for nearly 10 percent of its book sales, has sold more than 2 million print and e-book editions combined. It is currently the Press’ top-selling e-book, and according to Becky Brasington Clark, director of marketing and online book publishing, is consistently a top seller in two Amazon categories: Aging Parents and Dementia.

Not bad for a book that was turned down by 10 trade publishers before the Hopkins Press, then with a burgeoning interest in publishing books on health issues for consumers, took it on.

In those days, according to Rabins, not much was known of Alzheimer disease, and most people regarded dementia as a simple fact of aging rather than a medical problem. Rabins had come to Hopkins to do a fellowship in a memory disorders clinic headed by Marshal Folstein. When they counseled patients’ families, many said it would be helpful to have things written down, such as instructions on what to do when the patient started wandering or getting upset. The result: summary sheets on how to deal with different problems related to dementia, which were gathered together into a 40-page booklet. Then advice columnist Ann Landers wrote about the new Alzheimer’s Disease and Related Disorders Association (now the Alzheimer’s Association), which used the booklet as one resource to send to people.

“There weren’t many resources then so people started writing for copies, and my secretary spent a lot of time mimeographing and sending them out,” remembers Rabins. “I mentioned this to Dr. McHugh [then director of the Department of Psychiatry and Behavioral Sciences], and he said, ‘Gee, sounds like you need to put this together in a book.’”

Thanks to an endowment from T. Rowe Price that established a service to teach professionals how to diagnose and care for people with Alzheimer disease and dementia, Rabins and McHugh hired psychologist and educator Nancy Mace to coordinate the service and help write the book. Because principles of caregiving are the same regardless of whether the cause is Alzheimer’s, the book was targeted to caregivers of people with any kind of dementia.

Jacqueline Wehmueller, executive editor at the Press, credits the book’s longevity to its comprehensiveness, ease of use, and insight into dementia’s impact on family members. “The anecdotes in the book followed by detailed analyses are invaluable to people,” she says. “And you can easily go to that section of the book that meets where you are in the process of caring for someone; you can find what you need right now.”

The fifth edition includes the latest research on Alzheimer disease, especially the large role that genetics can play, and on how head injuries and concussion contribute to dementia. It also provides updated information on managing the early stages of dementia, preventing dementia, and finding appropriate living arrangements for someone with dementia when home care is no longer an option. Fortunately, a donor has funded a program, The Jane K. Schapiro Dementia Care Program, to provide copies of the book to people who can’t afford it. The donation also funded a new website featuring teaching videos for people with dementia and their caregivers (www.hopkinsmedicine.org/rabins_alzheimers).