Archives - The Genetics of Attempted Suicide

The Genetics of Attempted Suicide 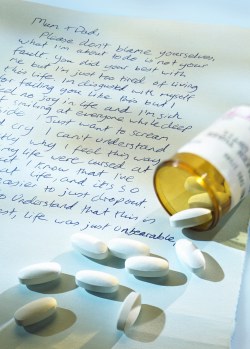 The idea that genes play a part in the chance that a person with bipolar disorder (BP) will attempt suicide—as opposed to just thinking about it—isn’t new. Large epidemiological surveys and twin studies suggest that. But a recent study of the DNA of some 2,700 adults with BP, carried out by mostly Hopkins psychiatrists, went further than usual: The study tied four genes on a narrow region on chromosome 2 to increased risk of ending one’s life.

One gene called ACP1 especially stood out. The researchers found more-than-normal levels of that gene’s product in brain tissue of the disease’s suicide victims. Interestingly, the enzyme can affect the same biological pathway as lithium, a therapy prescribed, in part, for its anti-suicide properties.

The association of gene and behavior in patients with BP was clear: Those carrying one copy of an ACP1 variant were 1.4 times more likely to have attempted suicide. Those with two copies of the less typical ACP1 were almost three times more likely.

“What’s promising are the implications for learning more about the biology of suicide as well as the medications to treat patients who may be at risk,” says researcher Virginia Willour. “Not everyone with bipolar disorder can take lithium because of its side effects. If we could give people another option, that would be fantastic.”

The team was able to repeat its findings in another study group, one with DNA samples from more than 3,000 people with the disease.

Work of this sort is crucial: Of those with bipolar disorder, 47 percent think of killing themselves, while 25 percent actually try to do it. That’s a far cry from the entire U.S. population, where 4.6 percent make attempts.