Archives - The Day an Era Ended

The Day an Era Ended 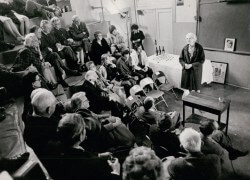 1 2
Famed pediatric cardiologist Helen Taussig put together the program and started things off at the Final Meeting in the Harriet Lane Home, on March 14, 1974. More than 100 nostalgic Harriet Laners turned out, shivering in the unheated amphitheater.

Before the old Harriet Lane Home was demolished in 1974, a deep sense of loss swept through pediatricians who had worked there. They wanted a wake.

To this day, John Littlefield remembers the surprise he felt in the fall of 1973 when he arrived from Boston to become director of Pediatrics and found a group of wistful colleagues awaiting him. After a full decade of updating its pediatric facilities, Hopkins had just opened a new outpatient and emergency center for infants and children to replace the crumbling 62-year-old Harriet Lane Home where these pediatricians had worked. But instead of elation over their modernized quarters, the doctors were feeling nostalgia for what they were losing—the legendary Harriet Lane Home, scheduled for demolition in the spring.

Indeed, the Harriet Lane Home had stood as a national icon. Named for its benefactress, the niece of former U.S. President James Buchanan who had married a Baltimorean, it had opened in 1912 as the first center for academic pediatrics in the United States. Offering specialized care for children and infants, as well as research and teaching, before pediatrics even existed at most hospitals, the historic facility inspired so much loyalty among pediatric residents who trained there that they referred to themselves as “Harriet Laners.”

“The staff and even the trustees wanted some sort of commemoration,” Littlefield says, “at least a wake.”

Littlefield, who’d been trained in internal medicine, not pediatrics, knew he had to show empathy. And so, he quickly organized an official goodbye. Turning to famed pediatric cardiologist Helen Taussig, who’d begun working in the Harriet Lane Home in 1930, he asked her to put together a 45-minute farewell. That program, billed as the Final Meeting in the Harriet Lane Home Amphitheater, took place on March 14, 1974, and was attended by more than 100 pediatricians, house officers, staff, and trustees. Shivering in the unheated amphitheater, they sat on hard wooden seats that served as bleachers—transfixed as five pediatric giants recounted stories of life in Harriet Lane through the years. Today, the memories of people who were there that day, and a transcript of the proceedings that appeared in the January 1975 Johns Hopkins Medical Journal, paint a picture of an event that marked the end of an era.

The physicians Taussig invited to speak had all been pioneers in their pediatric specialties: 82-year-old Hugh Josephs in hematology; neonatologist Alexander J. “Buck” Schaffer; Leo Kanner, recognized as the father of child psychiatry; medical geneticist Barton Childs; and Taussig herself, a developer of the world-famous Blue Baby heart operation.

“I remember being overwhelmed to hear some of my heroes speak, especially Buck Schaffer, who was Dr. Neonatologist to me,” recalls Alex Haller, Pediatric surgeon-in-chief from 1964 to 1997. “I sat like a medical ‘bobby-soxer’ at the feet of my mentors.”

David Valle, a serious amateur photographer who would go on to complete his residency at Hopkins, appreciated that something of a historical moment was happening. He drove up with his cameras from the NIH where he was working at the time. Photos he took that day illustrated the event’s transcript in The Johns Hopkins Medical Journal.

“It was a chance to sit with my friends and mentors in a place that meant so much to me during my residency [in the 1960s],” says John Neff, later medical director of Seattle Children’s Hospital. “I would not have missed the event. That very amphitheater had been filled every Saturday morning for pediatric grand rounds. It was a high point of the week. It was terrifying for me as an intern to present a case there. We were expected to be succinct and include all of the pertinent patient information without notes.”

“Nostalgia,” postulates Neff, “is built around valuable and memorable experiences that can never be repeated.”

For Larry Pakula, who’d been on the house staff starting in 1957, the setting also brought back the hours he’d spent right there being exposed to his professors’ thinking as they debated and argued at grand rounds. “Then we’d all go on to the Doctors Dining Room for coffee. It was a great time,” Pakula says. But the Final Meeting “brought sadness that such intimacy was disappearing in medicine.”

Taussig opened the program by introducing Hugh Josephs, who had interned under John Howland, the Harriet Lane Home’s chief from 1913 to 1927. What Josephs made clear were the changes that had occurred in 60 years in medicine itself. “Perhaps the most striking thing about the beginning,” he told the group, “was the lack of conveniences and equipment. There was no clinical laboratory to which one could send specimens for examination. Each intern did his own bacteriological work. Hematology consisted of a white count and, if indicated, a hemoglobin determination. Blood chemistry was about to be invented as a part of research.”

Josephs described typical cases from those early days: “Diarrhea was rampant in the summer.” The successful understanding and treatment of this condition, he said, “was the first great contribution of the workers at the Harriet Lane.” Pneumonia was the disease of winter. “We had no drug for that.  We would wrap the babies up and put them out in the cold where they generally did well.” In the fall, there was typhoid. “The city water was safe, but these children had been with their parents picking fruit in the country and drank country water. Congenital syphilis, we saw at any time. We could recognize that across a room in a crowd.” Conquering rickets, Josephs said, was the second great triumph of Harriet Lane, “and for that very reason, largely unknown to you,” he told those assembled.

Next up was Schaffer. “I came here feeling rather joyous and happy,” he said to the group. Sitting in this room filled with pleasant memories, but faced with the imminent demolition of the old Harriet Lane Home, “I now confess to feeling something more intense than nostalgia.” He noted that he had “lived right smack in this building for four full years,” working “in the wards every morning and in the dispensary every afternoon. I spent the noon hour almost every day in this very amphitheater taking part in the staff conferences led by my remarkable chiefs. And I slept here, that is, until the alarm bell rang. We even took all of our exercise right here. The lone tennis court was right next to the HLH.”

When 80-year-old Leo Kanner rose to speak, his reminiscences of his years as a Harriet Lane faculty member from 1931 to 1959 were emotional.

“I have seen palatial hospitals compared to which the Harriet Lane was a dump,” Kanner said. “I have lectured and listened in resplendent modern halls compared to which the one at the Harriet Lane is the poor replica of a medieval contraption. Why is it, then, that in such surroundings I and many others thrilled at the thought of working at the Johns Hopkins Hospital and look back to our years there with unadulterated affection? ... My colleagues and I … may have grumbled at times about small budgets, poor equipment, and shabby quarters, but we were grateful for the one magnificent gift which outweighed everything else—the opportunity to work unhampered, to develop and pursue our curiosities, to test our theories, and at all times to be true to ourselves.”

Among the speakers, 58-year-old Barton Childs represented youth, but even he waxed nostalgic. “I’m delighted that we are using this room,” he said. “We’d have meetings here every day, and it was a place where you could be sure that you would see your friends and colleagues repeatedly. The only other place where that happened was in front of the only elevator in the building. And it was slow.”

Did the Final Meeting achieve the effect Littlefield had hoped for? Childs’ closing remarks addressed that point: “I think it’s wonderful that we had this meeting, and I think it is a splendid thing that Dr. Littlefield proposed it. Not all new department chairmen would have the sensitivity to think about the feelings of people who had been in such a place, and I’m not sure that all new department heads would have had the self-assurance to be willing to sit around and listen to stories of the feats of the giants who preceded him.”

“It was the right way to go,” Littlefield admits today. “A good opening gun for a new era.” *

The Harriet Lane Home was razed in 1974, but its name and what it represents in service and teaching have been preserved, insists George Dover, Pediatrics’ current director.  “The Harriet Lane Clinic, open and running for 100 years, is still serving the children of East Baltimore. Our training program always has been called the Harriet Lane Pediatric Residency Program, and its graduates will always be ‘Harriet Laners.’” The residents also continue to update the famed Harriet Lane Handbook, now available not just in print, not just online, but in a searchable “unbound” version.