Archives - The Cancer No Man Wants to Face

The Cancer No Man Wants to Face

Early detection is key to survival for those with penile cancer. 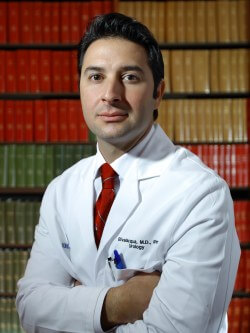 The numbers are low but the taboo remains all too real, and that reticence on the part of patients and some physicians to discuss the possibility of penile cancer costs lives. Though the cancer strikes only 1 in 100,000 men, it is extremely aggressive, more so than testicular cancer, says Johns Hopkins urologist Trinity Bivalacqua. This combination of diagnostic scarcity and metastatic potency often leaves patients who are referred to Bivalacqua on the cusp of facing life-threatening illness.

Such was the case with Michael Jennings (not his real name), a 74-year-old patient who had been to his local urologist several times over the past few years to deal with urinary issues. On their last visit, Jennings’ urologist noted some raw skin on the tip of the penis. But Jennings allowed more than a year to pass before he paid a visit to Bivalacqua. By that point, the site was fully involved.

Jennings, an always active, healthy man (“I still don’t wear glasses,” he says proudly), was shocked at the diagnosis of penile cancer. “At first I couldn’t believe it happened,” he says. “Looking back, I knew it was there. [Dr. Bivalacqua] had to remove some of the penis. I wasn’t happy about that, but I wasn’t happy about cancer either.”

With surgery considered the best treatment for penile cancer, Bivalacqua often conducts two procedures at separate times. The first, either a partial penectomy or radical penectomy (complete removal) removes the cancer; the second, an ilioinguinal dissection, involves exposing lymph nodes in the groin to see if the cancer has spread. Both can be extremely complex procedures, notably the reconstruction of the urethra if the glans or shaft is taken during the cancer surgery.

Drawing on his reconstructive experience as a prostate and bladder cancer surgeon specializing in nerve-sparing procedures, Bivalacqua—who, with his surgical partner Arthur Burnett conducts 12 to 20 penile cancer removals a year—often connects the urethra opening to an incision in the perineum. This means the patient will have to urinate in a sitting position; not the ideal outcome (though sometimes both the penis and erectile function can be maintained), but a trade-off that Mike Jennings was glad to make in return for a cancer-free existence.

Fortunately, Jennings’ cancer had not metastasized. “I feel great,” he says, six months after the surgery. “I was amazed that I had no pain in the hospital. I never even had pain medicines.”

Bivalacqua says that although penile cancer is rare and that Jennings was not in a high-risk group, certain men face increased odds for acquiring the cancer. “People who have HIV, are immuno-compromised or uncircumcised, have a history of multiple STDs, have HPV infection—the same subtypes that cause cervical cancer—these patients [with abnormal growths] should be seen early because this is a very curable disease if it’s caught early. However, these patients often present to us with advanced-stage disease, metastatic disease, because they were often not properly counseled or referred at the right time.”