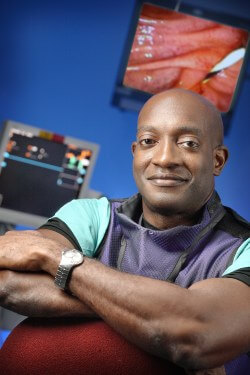 Despite the fact that endoscopy has proved its worth for all varieties of bleeding ulcers, a positive outcome isn't always assured, says Patrick Okolo, who’s performed hundreds of the procedures.

“It’s clear that the technique is operator-dependent and can require great dexterity and skill,” he says. Large spurting vessels in the posterior duodenal wall, for example, or bleeding ulcers in upper reaches of the lesser gastric curvature can test any clinician’s mettle. To compound things, Okolo says, “we’re seeing more patients on anticoagulants for heart disease. So more people have ulcers that bleed, and when they do, they bleed more profusely.”

But now there may be a new way to stem bleeding quickly. Okolo and a Hopkins team partnered with industry and gastroenterologists at the Chinese University of Hong Kong for the first clinical trial of a powder that, when sprayed on the ulcers, rapidly cut hemorrhage short.

Twenty patients with significant GI bleeding participated in the safety and efficacy trial of Hemospray, the directed, airborne nano-sized particles of a mineral compound dubbed TC-325 by its industry source. The particle powder seals ulcers both by dehydrating surface blood and by boosting natural platelet-based clotting. “We achieved bleeding control in 95 percent of patients,” says Okolo—all except one man with a pseudoaneurysm, something best handled surgically anyway.

The work began after colleague Samuel Giday mused that Hopkins might try the topical powder-based methods that the U.S. military uses on the battlefield to treat wounds. What’s resulted is an endoscopic setup in which a small, handheld carbon dioxide canister delivers bursts of Hemospray via a catheter aimed at, but not touching, the bleeding artery. Key questions still remain, mostly concerning venous applications. But for now, Okolo says, the technique looks user-friendly. MC