Next leader praised for his "ferocious appetite" for excellence. 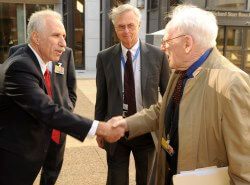 Paul B. Rothman has found his “dream job.”

Trained as a rheumatologist and molecular immunologist, Rothman will succeed Edward D. Miller, who will retire in June after 15 years as both the School of Medicine’s 13th dean and the first CEO of Johns Hopkins Medicine.

Rothman, dean of the Carver College of Medicine at the University of Iowa since 2008, previously served on the faculty of Columbia University (1986 to 2004), where he rose from instructor to vice chairman for research in the Department of Medicine and was founding chief of its Division of Pulmonary, Allergy and Critical Care Medicine.

“[Paul Rothman] is a visionary leader with a deep and highly sophisticated understanding of the challenges facing health care and academic medicine today. Instead of being daunted by those challenges, he sees them as opportunities to do better, to serve our patients in ways that improve clinical outcomes while also improving our employment of scarce health care resources and enhancing the education of the next generation of physicians and researchers,” said Daniels.

Rothman first joined Iowa in 2004 as head of internal medicine, substantially growing the department’s reserves while recruiting new divisional leaders, increasing the faculty to a record 230, and adding clinical programs. He also initiated programs in diversity and mentoring for young faculty members and supervised the launches of an interdepartmental heart and vascular center and an organ transplant center.

During his tenure as dean at Iowa, he has recruited new leadership for nine departments, stabilized the medical college’s finances despite cuts in state support, begun an overhaul of the medical curriculum, and opened a branch campus in Des Moines. In addition, he helped to establish a strategic new administrative structure for University of Iowa Healthcare, developed interdisciplinary research programs, and solidified the clinical practice plan.

The search that resulted in Dr. Rothman’s appointment took many months. Search committee member Myron “Mike” Weisfeldt, the William Osler Professor and director of the Department of Medicine at Hopkins, was chair of medicine at Columbia early in Rothman’s tenure there and was impressed with his work as a physician, researcher, and educator.

Weisfeldt appointed Rothman to his divisional leadership post at Columbia and later nominated him for the department chairmanship at Iowa. “I saw young, talented people flock to his laboratory, publish, and progress in their careers,” Weisfeldt says. “I also saw his clinical commitment to excellence and heard reports of a flair for teaching. I knew he had it all, including leadership and administration.”

A native of New York City, Rothman earned his undergraduate degree from MIT and his MD from Yale. He received his clinical training at Columbia-Presbyterian Medical Center and worked as a postdoctoral fellow in biochemistry at Columbia University. As a researcher, Rothman has investigated the signaling pathways required for allergic immune responses and cancer.

The newly appointed dean is married to physician Frances Jane Meyer, a clinical gastroenterologist on the faculty of the Carver College of Medicine. They have three children: Alissa, 18, Daniel, 17, and Eric, 13.