Archives - Pancreatic Cancer? There's an App for That

Pancreatic Cancer? There's an App for That 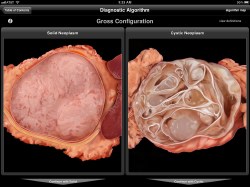 Student users of the new iPad tool can scroll quickly through both gross (above) and microscopic images.

Pancreatic cancer, which kills 95 percent of patients within five years of diagnosis, is one of the most difficult cancers to diagnose. A gland of infiltrating cancer in the pancreas often looks like normal tissue. Moreover, for years, pancreas surgery was not done at many hospitals, and at many institutions, pathologists have little experience diagnosing pancreatic tumors.

Now, thanks to a collaborative effort between Hopkins’ departments of Pathology and Art as Applied to Medicine, physicians and medical residents have a new, free tool to help teach them to better diagnose cancer and other tumors in the pancreas. The tool, the Johns Hopkins Atlas of Pancreatic Pathology, is an iPad application that enables users to search more than 1,400 high-resolution pancreatic images and go through an interactive decision algorithm showing nine major tumor types.

“This is the first interactive teaching app in pathology,” says surgical pathologist Ralph H. Hruban, director of the Sol Goldman Pancreatic Cancer Research Center. “With a book, you can show only one facet of a tumor since there’s usually just one example because of space considerations. There’s so much more flexibility with this technology.”

Via the touch screen, users can enter the algorithm at any point in the decision tree, quickly scroll through both gross and microscopic images in the atlas, read a caption for each image, view images individually or side by side, create their own image albums, and search by key word and diagnostic feature. Users can also take a quiz of 166 multiple-choice questions to test what they’ve learned.

The application began as the master’s thesis project of medical illustrator Bona Kim, a student in Art as Applied to Medicine, and is intended as a teaching tool, not a means of diagnosis. Working with her advisor, associate professor Corinne Sandone, Kim created the instructional design, adapted the algorithm to fit the iPad interface, and produced 26 original illustrations. Pathologist Toby Cornish organized and managed the database of images and wrote descriptions. The images come mostly from boxes of slides Hruban has collected over the past 20 years.

The researchers released the application in October and made it available for free through the iTunes store. In the first two weeks, it was downloaded nearly 2,000 times by users in more than 20 countries. “I was just a student and I didn’t even think this product would be in actual use,” says Kim. “But some medical schools are even using it.”

The app is also proving useful to another audience: “The app was meant to help young doctors, but I think it is a terrific way to help patients understand their disease and the decisions we make to determine their treatment,” notes Mark Talmonti, chair of the department of surgery at the University of Chicago Pritzker School of Medicine.

Kim is working on six animations for the app that show how a pancreatic tumor progresses. Plans are also in the works to create versions for other tablet computers, as well as a Web-based version.