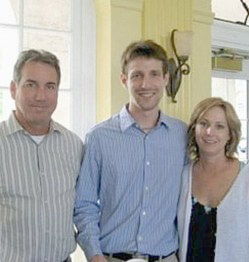 When Gregg Semenza advertised for a lab research technician in the spring of 2009, he didn’t expect to hear from a former president of Johns Hopkins University.

William “Bill” Richardson, now retired and a trustee at Kalamazoo College in Michigan, called Semenza to recommend Stephen Pitcairn for the position. Richardson had been mentoring the economics major and soon-to-be Kalamazoo graduate, and thought the lab position would be perfect for the young man, who was considering a career in medicine.

“I think Bill recognized Stephen’s potential more than Stephen did,” recalls Semenza, whose lab is in the Institute for Cell Engineering. The personal recommendation, combined with Pitcairn’s experience conducting stem cell research in Japan, led to a job offer.

Medha Darshan, who was managing Semenza’s lab at the time, kept the new hire busy, training Pitcairn on lab management procedures and teaching him basic molecular and cell biology techniques. He was a fast learner, taking over Darshan’s position when she went on maternity leave and teaming up with postdoctoral fellow Daniele Gilkes for a research project on the metastasis of breast cancer cells. Seeing the connection between lab research and its potential application to patients fueled Pitcairn’s interest in medical school. “What made Stephen a top candidate for medical school was not just his ambition but his sincere belief that, by being in medicine, he would be doing his part for humanity,” Darshan says.

When Pitcairn left work on a Friday afternoon in July 2010, his colleagues expected to see him again on Monday morning. But as he walked home Sunday night after visiting his sisters in New York, he found himself the victim of a robbery that ultimately cost him his life.

As his family grapples with unspeakable grief, so do his colleagues.

“It was a very difficult summer,” Semenza says. “What helped everybody get through it all was to focus on positive things by which to remember Stephen.” The idea of a living memorial seemed fitting, so Semenza and his team proposed planting a Japanese maple in a courtyard near the lab, a tribute to the year Pitcairn spent in Japan and his love of Asian culture.  The tree was planted in time for a memorial service at Hopkins that fall, which Pitcairn’s family and friends attended. “They could see how much Stephen meant to everybody here,” Semenza says.

The idea to establish a scholarship in Stephen’s name at the Johns Hopkins School of Medicine also emerged from discussions among Semenza and his lab colleagues. “We wanted to support someone who shares some of Stephen’s attributes—maybe a non-science major or someone with an interest in foreign culture and public health issues.”

But raising the $100,000 required to endow a scholarship—so that it could be awarded in perpetuity rather than just for a year or two—seemed a formidable task. Semenza admits he wasn’t optimistic that the goal would be reached, but his doubts soon disappeared when contributions began to pour in.

A Pitcairn family friend, Jacquie Asplundh, helped secure a $10,000 challenge grant that doubled each gift of $100 or more. News of the scholarship fund and challenge grant spread rapidly on the Hopkins campus and beyond. A Facebook page that Asplundh created, as well as newspaper and online tributes, touched people’s hearts and moved them to contribute. In six weeks, 125 gifts totaling nearly $30,000 were received—ranging from as little as $4 to significantly larger amounts, and coming from donors as far away as Japan.

The level of support for the scholarship has not surprised Asplundh. “It gave friends and family a chance to come together around their love and memories of Stephen, but maybe even more importantly, it gave strangers, people who had only experienced Stephen through the stories of his terrible murder, a place to express their humanity, to become part of his life rather than his death.”

Gifts continue to be donated, and it is expected that the School of Medicine will award the first Stephen Pitcairn Memorial Scholarship next fall.

“Stephen was loved by pretty much everyone he came in contact with,” Darshan reflects. “This is the least we can do to keep his memory alive.” The scholarship will stand as a reminder, she says, of how much Stephen valued his aspiration to become a doctor. “He never gave up on his dreams. If a similar dream can be awarded to another candidate like Stephen, it would be an honor to his memory.”

Gilkes agrees. “Above all, Stephen wanted to become a doctor. And I think he would have been great—not only did he have the intelligence but I believe he would have had a great bedside manner. I hope that the scholarship recipients will be outgoing, witty, curious, dedicated, and have a love and respect for different cultures like Stephen did.”

For Asplundh, a scholarship is a fitting tribute because it emphasizes both talent and achievement. In recent months, she has spoken with friends of Pitcairn’s in Japan, Germany, Spain, and across the U.S. The scholarship, she says, provides a common ground in which “to plant our love,” but it does not erase the pain of losing a beloved friend and family member. “We have to go on, but Stephen will never leave us,” Asplundh says. “And now, thanks to the hundreds of people who have stepped up, there will always be a student at the School of Medicine in Stephen Bradley Pitcairn’s honor.”

To learn more about making a gift in honor of Stephen Pitcairn, or to establish a scholarship fund, contact the School of Medicine Development and Alumni Relations Office at 410-516-0776 or jhmalumni@jhmi.edu, or visit http://www.hopkinsmedicine.org/som/alumni/##SP. *