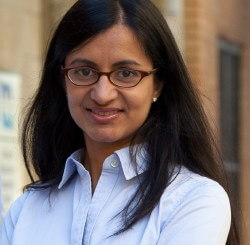 Shah: Building the toolbox in the fight against malaria.

Sarita Shah is hot on the trail of drug-resistant tuberculosis.

At the heart of any good detective story, there has to be a villain. James Bond had Rosa Klebb. Sherlock Holmes had Professor Moriarty. And for disease detective Sarita Shah ’00, there’s drug-resistant tuberculosis.

As an epidemiologist, Shah lacks Bond’s swagger or Holmes’ conceitedness. And though her research is, perhaps, a decidedly less glamorous game of cat and mouse, the stakes are just as high. “Drug-resistant TB is a global issue,” says Shah, “and it’s only getting worse.”

In some areas of the world, one in four people with tuberculosis will develop a strain of the disease that cannot be treated with standard drug regimens, according to a 2010 World Health Organization (WHO) report. Also according to WHO, an estimated 440,000 new cases of multi-drug-resistant tuberculosis (MDR-TB) emerge every year, causing 150,000 deaths. In 2008 alone, an estimated 69,000 cases emerged in Africa, with the vast majority going undiagnosed.

Shah’s work as a “disease detective,” began when she joined the Epidemic Intelligence Service at the U.S. Centers for Disease Control and Prevention. In 2006, she was the lead author on a groundbreaking Morbidity and Mortality Weekly Report that first introduced the term “extensively drug-resistant tuberculosis” (XDR TB). In 2007, she received a Doris Duke Clinical Scientist Development Award for her evaluation of a rapid diagnostic test of TB and MDR TB in HIV patients in South Africa. Now, as a faculty member at the Albert Einstein College of Medicine in New York, Shah spends a quarter of her time in South Africa, studying drug-resistant TB, particularly as it co-occurs in HIV patients, through a grant from the NIH.

Much of her work focuses on developing better diagnostic tools for the disease. “Of about half a million cases worldwide each year,” Shah says, “fewer than 10 percent are diagnosed.” That means that not only are patients going undiagnosed, but entire communities might be exposed. “It’s terrifying when you think about the crowded hospitals, clinics, and other congregate settings where TB is likely being transmitted every day,” she says. And it’s why Shah and so many other researchers are determined to better understand the disease.

“The term ‘disease detective’ describes a core function of public health epidemiology,” Shah says. “We’re taking an infectious disease and trying to understand everything about it to help solve a public health problem.”