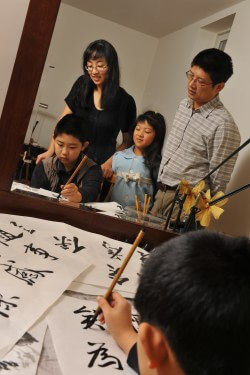 Hoping to garner coveted cover spots in two prestigious scientific journals, Hopkins neuroscientists Hongjun Song and Guo-li Ming decided to commission a young artist-in-residence: really young, as in 13; and quite literally in residence, as in, now sprawling on the couch in the living room of the couple’s Clarksville home, gaming controller in hand.

Neither Hongjun nor Guo-li—whose work focuses on regenerating brain cells damaged by injury or disease and who jointly have published 20 papers in major journals this year—can begrudge their eighth-grade son some precious down time. After all, it is a Saturday. Besides, the boy is coming off of a particularly productive month: Max’s artwork graces the covers of not only the October edition of Nature Neuroscience but also the October 12 issue of the Journal of Neuroscience. Plus, Max already logged a good hour in his basement studio earlier this morning, wolf-hair brush in hand, painstakingly practicing Chinese calligraphy.

Back when Max was just a kid, it was Guo-li’s mother who recognized raw talent in her grandson’s scratchings on paper and advised his parents to find him a good drawing teacher. Busy neuroscientists, they promptly ignored her. Max’s grandmother persisted, however. When Max was 6, Guo-li contacted Mu Jiashan, a contemporary master of Chinese art whose teacher’s teacher was the late Qi Baishi, a carpenter-turned-artist whose painting Eagle Standing on Pine Tree recently sold for 425.5 million yuan ($65.5 million) at auction in Beijing. Ever since, Max has studied with Mu Jiashan. In the past, lessons meant trekking to Rockville, Maryland; these days, his teacher appears for 90 minutes each week in Max’s home studio.

Max’s inspirations for how to visually interpret his parents’ research articles came partly from talking science with his dad and partly from discussing art with his teacher. He painted a classic Chinese landscape of mountains, trees, and a river to convey the idea behind the Nature Neuroscience article, which reports a paradigm-shifting discovery about the epigenetic landscape of the brain: DNA modifications in nondividing brain cells undergo shockingly large-scale dynamic changes as a result of stimulated brain activity.

These epigenetic changes once were thought to be as stable as mountains, and maybe only occasionally as flexible as trees swaying in the wind, but now have been shown by Max’s parents to be as fluidly changeable as rushing water. Their work has major implications for treating psychiatric diseases, neurodegenerative disorders, and for better understanding learning, memory, and mood regulation.

For the Journal of Neuroscience article, Max painted four frogs—three sitting and one leaping—amid grasses. The illustration is hardly metaphoric: His parents used frogs—classic experimental models—to inform the research paper that reveals a new molecular understanding of how muscle and nerve cells talk to one another.

Max, who wants to be a scientist when he grows up, or maybe a video artist, is pretty blasé about the whole business and generally unimpressed with himself: “I don’t really like showing off my work; that’s not why I do it,” he says.

But his parents appreciate what a big deal it is to capture the cover of one journal, much less two in a month: “It’s very competitive,” Hongjun says. “You have to have something unique; a really good idea. This is exciting!”