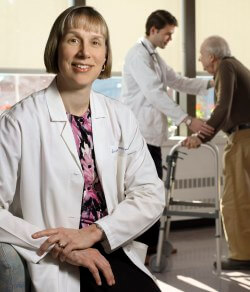 1 2
Geriatric psychiatrist Susan Lehmann foresees a “tsunami of aging” in the U.S., making it more important than ever to teach future physicians (like fourth-year med student Zachary Cordner, with patient Stephen Greenspan) about psychiatric illnesses that afflict the elderly.

Geriatric psychiatrist Susan Lehmann tells the story of an 82-year-old patient who was sleeping poorly, losing weight, experiencing episodes of panting and shortness of breath, and feeling physically drained. After a year of such complaints, her physicians in rural Tennessee remained stymied. They told the woman’s husband that she was “normal” and suggested that he “just take her out more.” Another family member persuaded her to travel to Baltimore to see Lehmann.

The Hopkins physician quickly diagnosed the patient with depression accompanied by panic attacks. “Because she never told the doctors that she felt ‘sad,’ they were not equipped to recognize what this was,” she says. “It eluded them completely.”

Lehmann hopes to help change that with support from the School of Medicine’s Institute for Excellence in Education. In December she became the first recipient of the Institute’s Berkheimer Faculty Education Scholars Award, a $50,000 grant to fund a project that enhances and improves the education of medical and/or graduate students at the School of Medicine. Drawing on her 20 years of clinical experience and seven years as director of the clerkship for psychiatry, the assistant professor will develop a curriculum and materials to teach future physicians about psychiatric illnesses that affect older people.

That’s exactly the kind of educational vision needed to shape the way physicians approach health care, according to associate professor of medicine Joe Cofrancesco, who directs the two-year-old institute.

In its quest to improve medical education and opportunities for faculty educators, the IEE has instituted a monthly series of medical and biomedical education Grand Rounds, established teaching awards that are peer-nominated and reviewed, and acquired the endowment for the Berkheimer Faculty Education Scholars Program, as well as funding for the Herbert L. Fred visiting professorship in medical and biomedical education. In March, the IEE, in conjunction with the Office of the Vice Dean for Education, will host a new daylong education conference that will become an annual opportunity to bring together educators from all disciplines throughout the School of Medicine.

Situated in offices in the Armstrong Medical Education Building, the institute has taken root in fertile soil. Since Dean Edward D. Miller appointed David Nichols as first vice dean of education in 2000, the mission to improve medical education—and to recognize and compensate faculty for teaching excellence—has become more prominent. The Genes to Society curriculum, the construction of high-tech classrooms, the addition of teacher development courses, and the launch of a Hopkins-designed medical school in Malaysia are signs that clinician educators have become more visible and valued.

Julia McMillan, associate dean for graduate medical education, says the school’s promotions committee is paying more attention to faculty members who receive national recognition for disseminating their teaching methods, whether they involve a new curriculum or novel ways to teach other instructors.

“For many decades at academic medical centers across the country—not just at Hopkins—teaching is what you did for free on the side,” she notes. “The IEE is pursuing a mission. It’s not only about measuring teaching and rewarding it in various ways, but also about stimulating ways to do it better.”

“The award gives a really important message about how much value Hopkins is placing on education,” says Janet Serwint, a professor of pediatrics who chairs the award committee. “It not only helps a faculty member create, develop, and implement an important project that has impact on education, but also encourages them to design a development plan that helps them become better educators.”

Although some medical schools have separate promotion tracks for clinician educators, Hopkins does not. The School of Medicine requires clinician educators to acquire the same level of national and international recognition it expects from its researchers and clinicians.

To help them reach such goals, the IEE provides guidance on how to build portfolios for academic advancement.  “We take clinician educators from day one and get them thinking about how to push their work to a new level of scholarship so that they can get promoted at Hopkins,” says Cofrancesco, who also directs Hopkins’ clinician-educator mentoring program. “We’re starting to broaden what scholarship means beyond publications, pushing the boundaries while also providing support.”

Mike Barone, assistant dean for student affairs and member of the IEE managing board, says that help he received from mentors in the department of pediatrics hastened his recent promotion to associate professor. Credited with helping to improve pediatrics education here, Barone also serves as president-elect for the Council on Medical Student Education in Pediatrics, a national group of educators.  “I’m not someone who has published a great deal, but I’ve done some other things that have advanced the field of education,” he says. “And the committee recognized that.”

The Institute’s ultimate goal, says Cofrancesco, is to attract, develop, and retain great faculty who will help improve medical and biomedical school courses and residency/fellowship training while molding “terrific researchers, scientist-educators, and doctors.”

Along with devising a curriculum for Hopkins students, Susan Lehmann will develop materials that can be used by other medical schools. She says that increasing knowledge about geriatric mental health is critical to confronting the upcoming “tsunami of aging,” particularly because the medical profession remains woefully short on geriatricians.

“Treating mental illness in the elderly is not intuitive,” she points out. “You can’t just extrapolate that what works for a 40-year-old is going to work for an 80-year-old. There are differences related to aging in terms of diagnosis, management, and treatment as well as other issues.”

She believes education will save lives: Studies show that 75 percent of the elderly people who commit suicide had recently visited their primary care physicians.

“The opportunity for prevention is not with psychiatrists, but with non-psychiatric physicians,” she emphasizes. “It’s a fact that depression is really prevalent in older people. And it is really important that every single physician be able to recognize it.” *